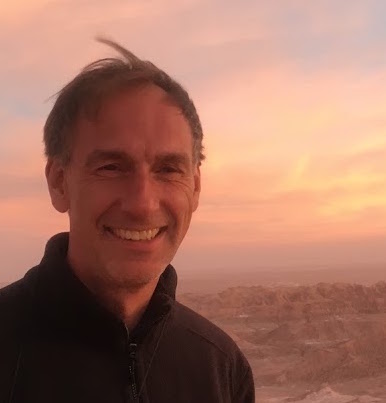 Univ.-Prof. Dr-Ing. Robert Pitz-Paal was unanimously appointed as the new Chair of the SolarPACES Executive Committee for the next 2-year term at the 93rd ExCo meeting held October 1st 2017 in Calama (Chile).

Pitz-Paal was previously vice chairman of the executive committee of SolarPACES.

He has been one of two directors heading the Institute of Solar Research at DLR since June 2011. Together with Univ.-Prof. Dr.-Ing. Bernhard Hoffschmidt he leads the Working Group on Solar Thermal Power Stations of the North-Rhine Westphalian Power Station Technology Competence Network.

An internationally recognised expert on CSP technology, Pitz-Paal serves on various German and international committees and the editorial boards of several scientific journals, and is frequently consulted on energy policy issues. He is also chairman of the Concentrated Solar Power CSP working group of the European Academies of Science Advisory Council as well as heading the Board of Trustees of the Jülich Solar Institute of the Aachen University of Applied Sciences.

Born in Kleve in 1963, Pitz-Paal read Physics at the Ludwig-Maximilian University in Munich from 1983 until 1988. In 1993 he obtained a PhD from the Department of Mechanical Engineering at Ruhr Universität Bochum with a doctoral thesis on concentrating solar technology.

In the same year he was recruited by the German Aerospace Center in Cologne where he spent the following years working in various positions at the Energy Technology Division. In 2002, Pitz-Paal was appointed as head of Solar Research at the DLR Institute of Technical Thermodynamics in Stuttgart, and held the post of Deputy Director of the Institute from 2009 until 2010.

Since 2003 Pitz-Paal has been a professor for solar technology at RWTH Aachen. He also spent the summer semester of 2008 as a guest professor at the Institute of Energy Technology at ETH Zürich.

His scientific publications won several awards from the American Society of Mechanical Engineers, ASME. His department was awarded Centre of Excellence status by the DLR Executive Board in 2006 and 2011 in recognition of its work.  The EU’s HYDROSOL Project, in which DLR Solar Research took part as one of four project partners, received the highly coveted Descartes Award of the European Commission. The SOWARLA project – one of the project’s spin-offs – received the 2007 ENERGY GLOBE Germany Award.