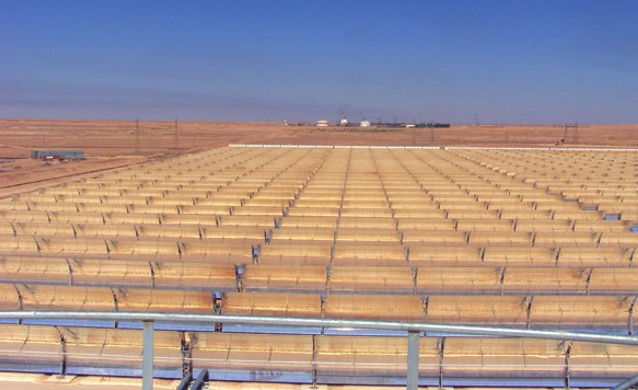 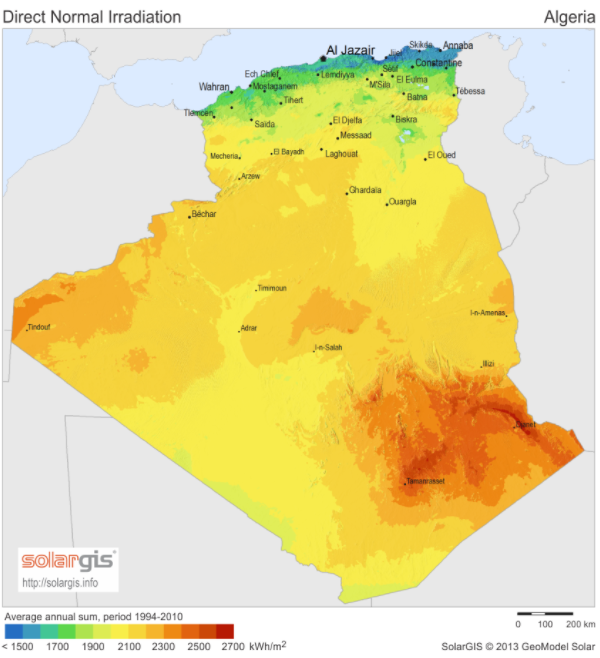 As of 2014, Algeria’s energy mix is mainly based on natural gas (more than 90%) in terms of power generation. Nevertheless, beyond its natural gas reserves, Algeria has a high potential for renewable energies. In 2011, the Algerian Government set a target of 22 GW of new capacity from renewable energy sources by 2030.

Algeria is by far the largest country of the Mediterranean. According to a study of the German Aerospace Agency, Algeria has the largest long term land potential for concentrating solar thermal power plants. For further information about the Algerian power sector and CSP opportunities download the Algeria START Mission Report

Incentive premiums for CSP projects are granted within the framework of Algeria’s Decree 04-92 of March 25th, 2004 relating to the costs of diversification of the electricity production. But beyond this Algeria is looking for a close partnership with the European Union so that Algerian plants may help deliver the green energy needed for Europe to meet its targets.

To bring these plans to reality, and to enhance the participation of the private sector – both local and international – in 2002, Sonatrach, Sonelgaz and SIM formed a new renewable energy joint venture company called New Energy Algeria (NEAL) to look at development of solar, wind, biomass, and photovoltaic (PV) energy production.

Algeria’s national renewable energy program is aimed to install 22 GW of renewable energy capacity in Algeria by 2030, of which 12 GW will be intended to meet the domestic electricity demand and, under certain conditions, 10 GW destined for export. It is expected that about 30-40% of the electricity produced for domestic consumption will be from solar energy by 2030.

In 2011, Abengoa commissioned a 150 MW Integrated Solar Combined Cycle (ISCC) power plant, which includes 25 MW of solar capacity. The plant, located in Hassi R’Mel in northern Algeria, is composed of a conventional combined cycle and a solar field with a nominal thermal power of 95 MWth. The goal of this project was to integrate the solar thermal technology in a conventional power plant. This combined use reduces the cost and facilitates the deployment of renewable energies in new industrializing countries.

In 2012, the German Aerospace Center announced the first solar tower power in North Africa in Algeria. A solar-gas hybrid power plant with an output of up to seven megawatts, to be constructed in Boughezoul, on the northern edge of the Sahara desert, would serve primarily as a pilot and research facility.

In 2015, Algerian energy minister Youcef Yousfi unveiled plans for 2 GW of CSP by 2030.