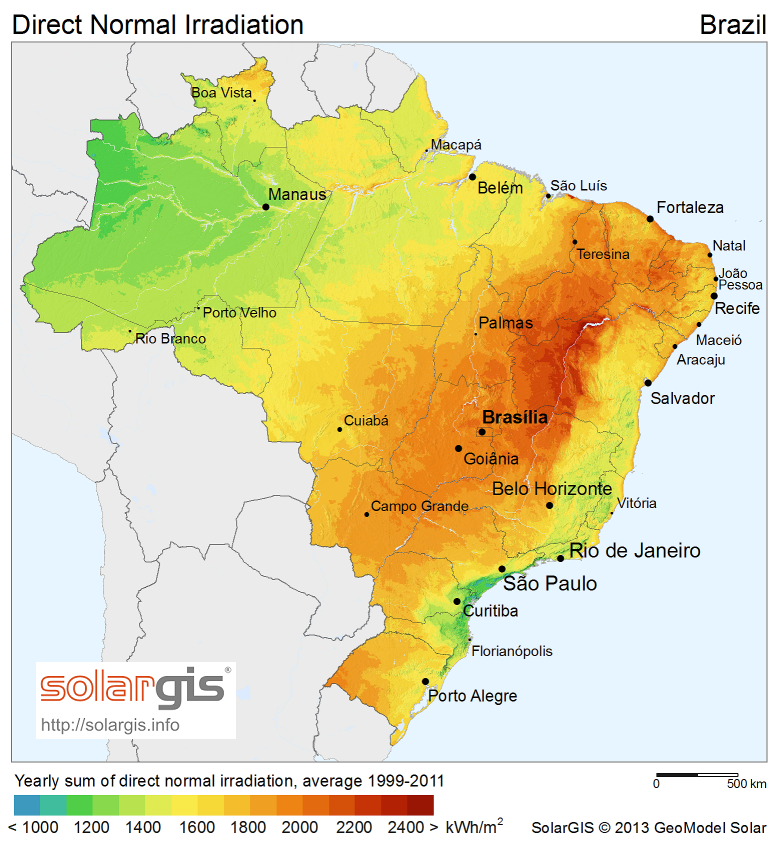 Brazil has extensive semi-arid regions with a direct normal irradiation on the order of 6kWh/m² daily. The greatest potential is located in the São Francisco River Basin and the Sobradinho areas in the Northeast. Potential sites in Brazil are close to the equator and this has an optical advantage. Immense land areas are available for solar thermal applications.

Brazil has monitored global radiation for the past twenty years and began monitoring direct normal radiation, a value necessary for studying solar concentrating technologies, in the past ten years. Studies have also produced correlations between the two values in order to benefit from the extensive global radiation databases available. CEPEL and others have identified off-grid villages, irrigation loads, and grid-connected power for cities as the market for solar thermal power plants in Brazil.

A 2-year agreement (2010 – 2011) was signed between the Ministry of Mines and Energy (MME) and CEPEL to support the development of a Basic Design for future implementation of a pilot CSP plant in the northeast of Brazil. Currently, CEPEL is developing a solar energy research facility Heliotermica.

1) Construction of a 1 MW parabolic trough plant,
2) Addition of a thermal storage energy system,
3) development of other technologies such as power tower or linear Fresnel.

The first phase of the project has a total budget of R$ 28.3 million and was officially started in December 2012 with the first funding deposit by FINEP. This first phase is scheduled to be completed within the next 3 years. As of 2017, pilot-scale projects designed to test a variety of CSP technologies are in operation in an academic setting.