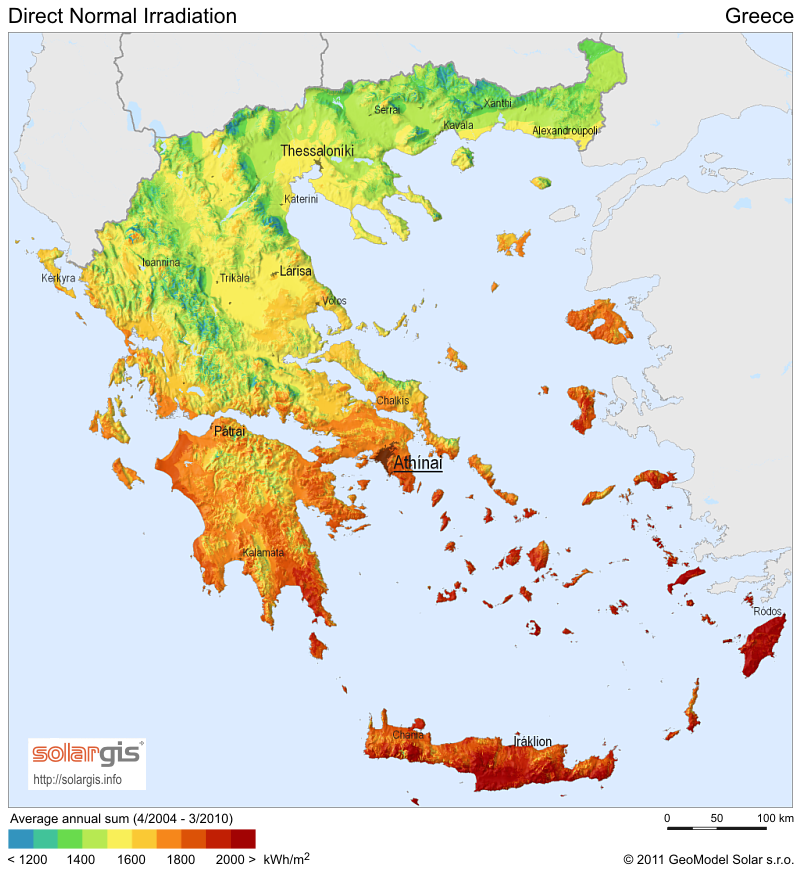 Greece has potential for CSP development only in few regions. Islands of Crete and Rhodes and the south region of mainland, where the radiation levels are comparable to radiation in southern Spain, are the most attractive locations in terms of CSP development.

By deploying CSP, Greece could significantly reduce its high dependency in energy imports (roughly 70% of the energy needs are imported) and secure the energy supply, especially during the summer peak period.

In 2006, the law 3468/2006 established grants for the generation of electricity using renewable energy sources. The tariff for CSP was set at 250 €/MWh in the mainland and 270 €/MWh in the non-interconnected islands for units with an installed capacity of up to 5 MW, and for units larger than 5 MW the law established a grant of 230 €/MWh and 250 €/MWh.

Greece presented in the summer of 2010 its National Action Plan for renewable energy sources setting a target of 20% contribution of the energy produced from RES to the gross final energy consumption. In order to achieve this target the government sets specific targets for RES electricity share (40%), RES heating and cooling share (20%), and RES transport share (10%).

Although currently Greece has no CSP plant in operation or under construction, recently 2 projects, to be developed in Greece, were awarded by EU with € 86.7 M under the NER300 programme. The Maximus project in the Florina region, which has been awarded with € 44.6 M, will have a total installed capacity of 75.3 MW and will consist of 25160 parabolic dish units. On the other hand, the Minos project, awarded with € 42.1 M, will be built in the southeast of Crete with a nominal electrical capacity of 50 MW employing central tower technology. These projects are expected to be operational by the end of 2016.