Winners of the 2022 SolarPACES Awards:

SolarPACES Chair Gilles Flamant presented the award to Dr. Christoph Falter, now with Synhelion, on behalf of Bauhaus-Luftfahrt, Dr. Johannes Grobbel, on behalf of DLR, Dr. Alon Lidor, on behalf of ETH Zurich and Dr. Charles-Alexis Asselineau, on behalf of IMDEA Energy for the Sun-to-Liquids project; the development of solar-driven jet fuel technology for the aviation industry, now being commercialized by ETH spin off Synhelion. 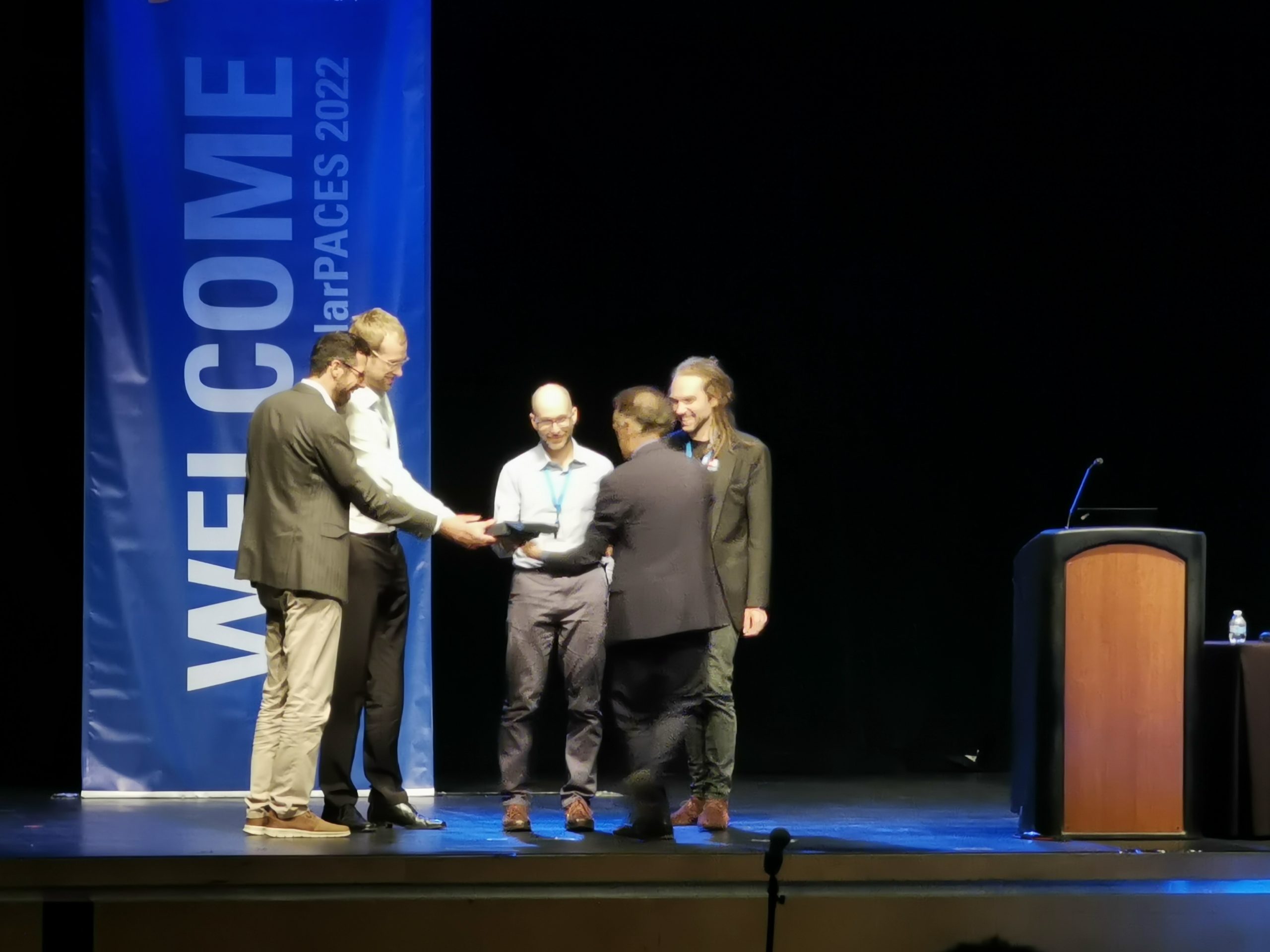 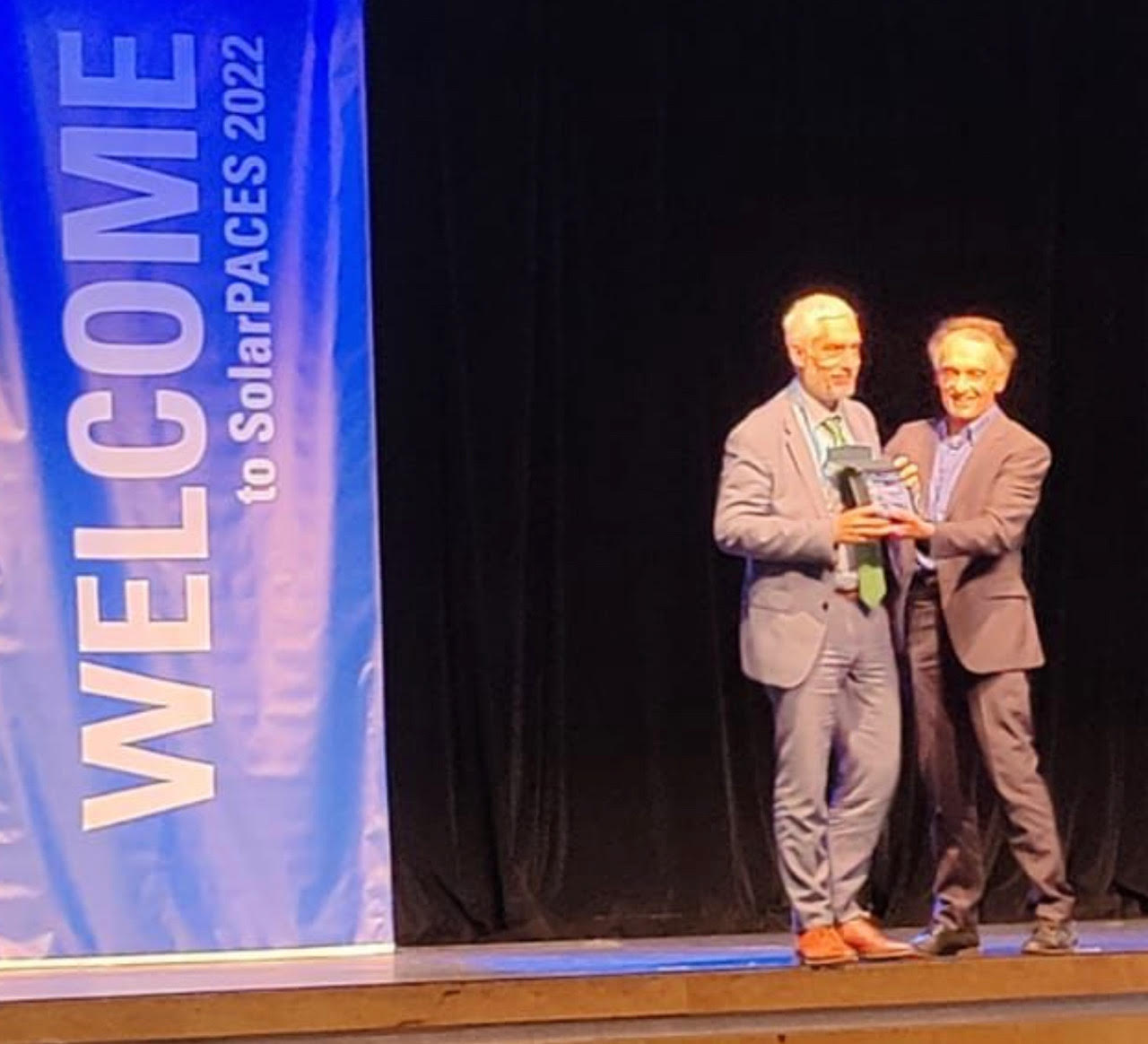 On the closing day of the SolarPACES 2022 conference held in Albuquerque, Xavier Lara, Senior Vice President CSP at Pacific Green Technologies Group (PGTK), CEO at the international consultancy AELIUS, and Renewable Energy International Senior Consultant on CSP for the Asian Development Bank (ADB), was awarded the Lifetime Achievement Award by SolarPACES chair, Gilles Flamant, in recognition of his wide-ranging experience and international leadership in the sector including roles in the development of CSP in China, Morocco, Dubai, India and Spain.

The annual SolarPACES Awards honor the personal engagement of individuals and institutions that significantly contribute to the deployment of CSP technology. Two types of Awards can be given:

For innovations relevant to a more rapid deployment of CSP technology through:

The innovation should be realized at least in technical prototype and its characteristics should have been published according to scientific standards.

This award honors personal contributions to the successful development and implementation of CSP systems of an individual throughout a major phase of his/her life. Criteria are:

Winners of the 2021 SolarPACES Awards:

Winners of the 2020 SolarPACES Awards: 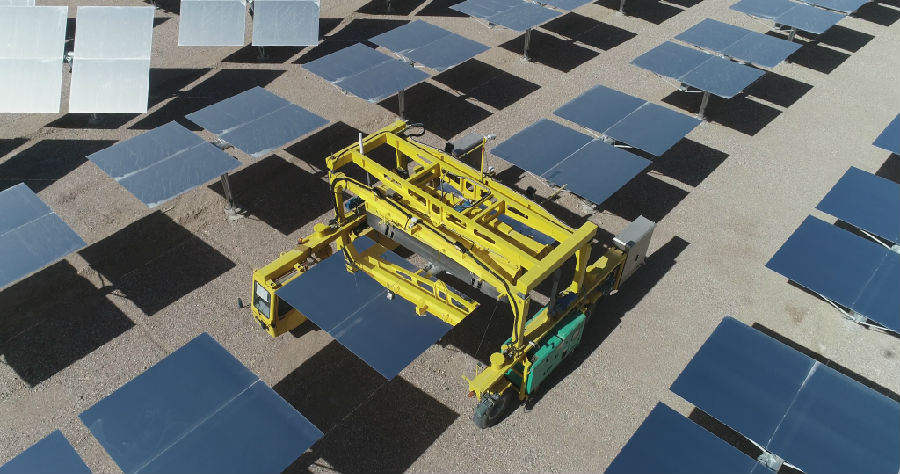 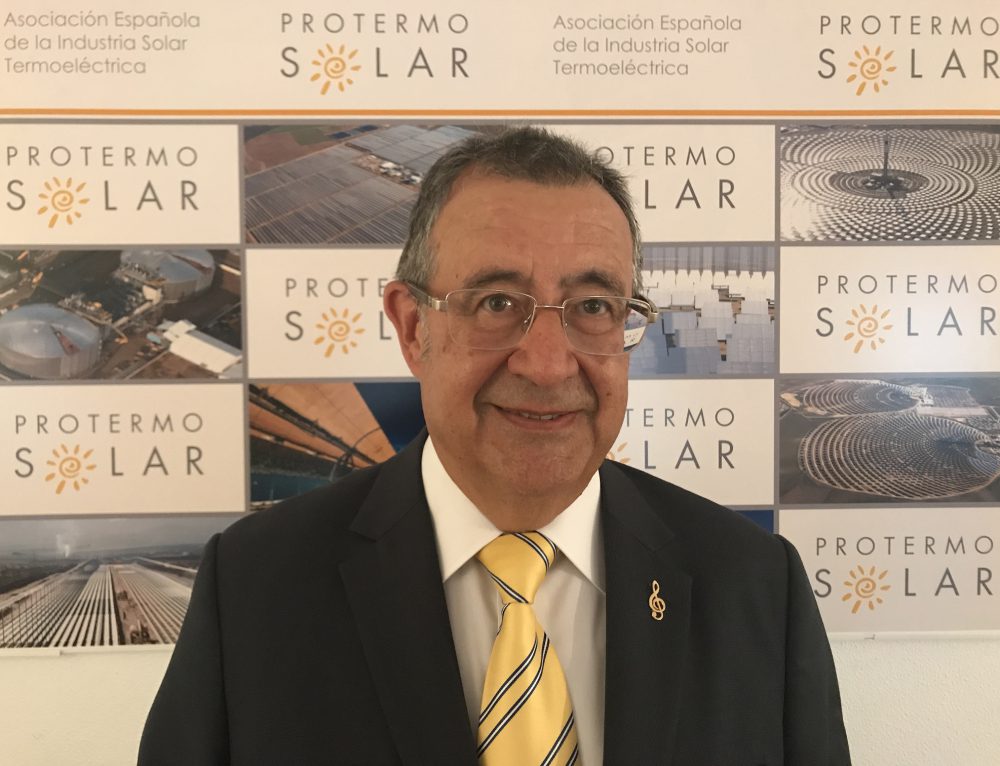 On the opening day of the SolarPACES 2020 conference (held virtually in 2020) Luis Crespo, president of the Spanish Association for the Promotion of the Solar Thermal Industry (Protermosolar), was awarded the Lifetime Achievement Award by Robert Pitz-Paal, president of SolarPACES, in recognition of his commitment to the sector and the achievements obtained, and his leadership both nationally and internationally, throughout his long professional career. He received an additional award from the Spanish R&D centers and companies which was given by Carlos Alejaldre, CIEMAT’s General Director. Also, a plaque will be placed at PSA main building in recognition of his work.

Winners of the 2019 SolarPACES Awards: 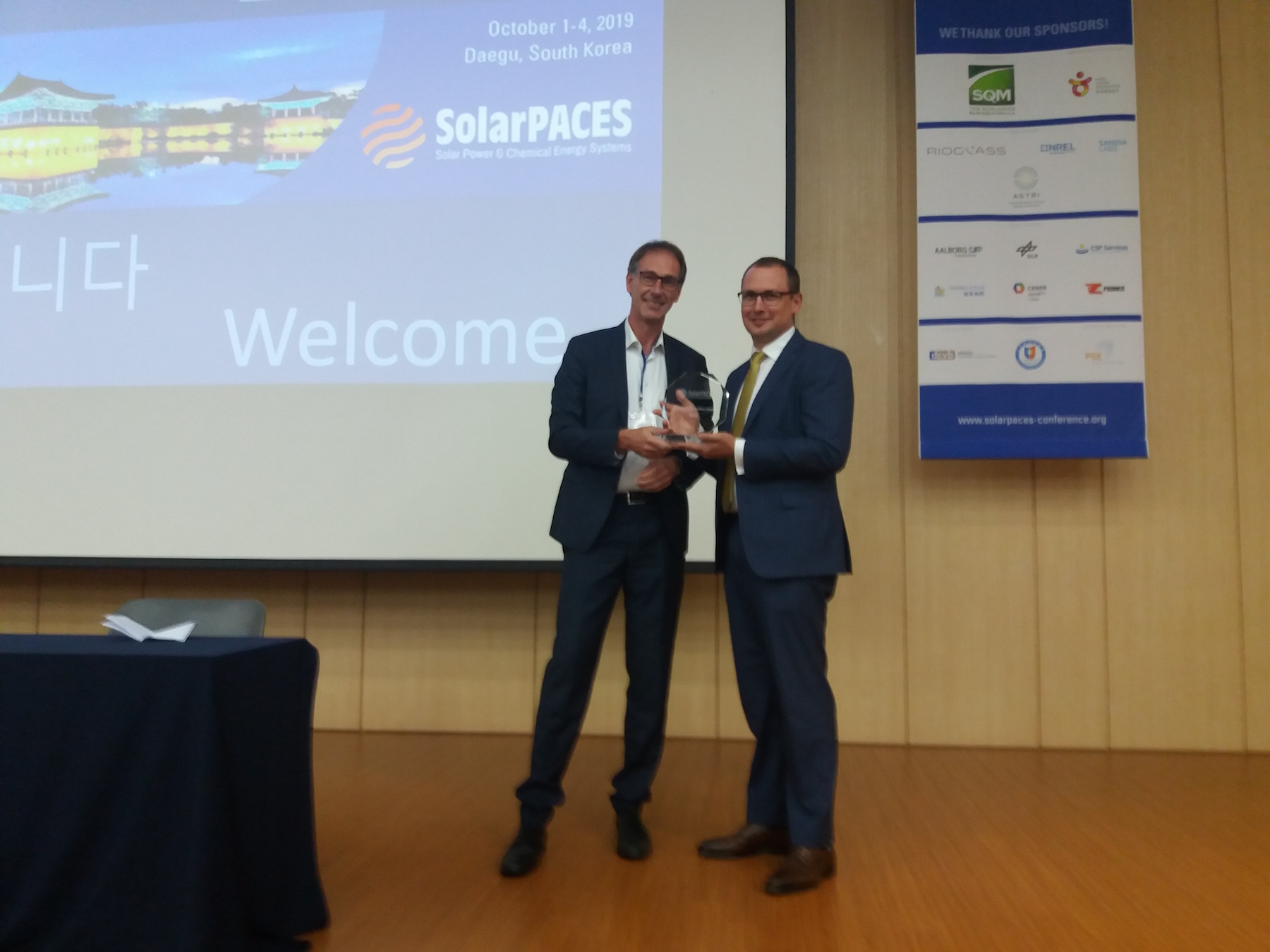 SolarPACES Chairman Robert Pitz-Paal (left) who heads up the DLR Institute for Solar Research presenting the award to Craig Wood, an Oxford University Rhodes Scholar with two engineering degrees from the University of Western Australia who is Chief Executive Officer of Vast Solar.

Winners of the 2018 SolarPACES Awards: 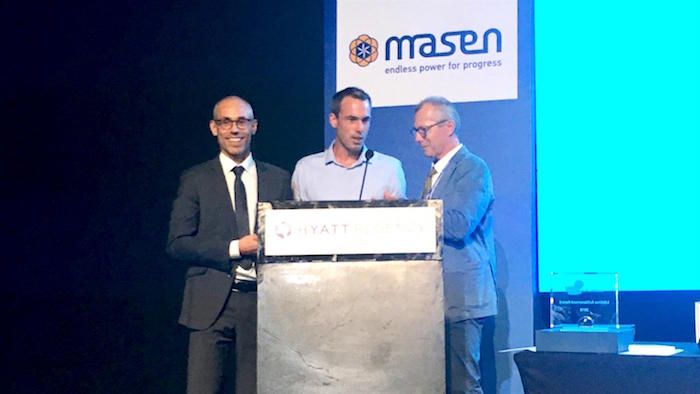 On the closing day of the SolarPACES 2018 Conference in Casablanca, Morocco, DLR received the SolarPACES 2018 Technology Innovation Award for QFly, which enables the quality assessment of solar-thermal power plants using an unmanned aerial vehicle (UAV). The analysis software developed by DLR is at the core of the system. 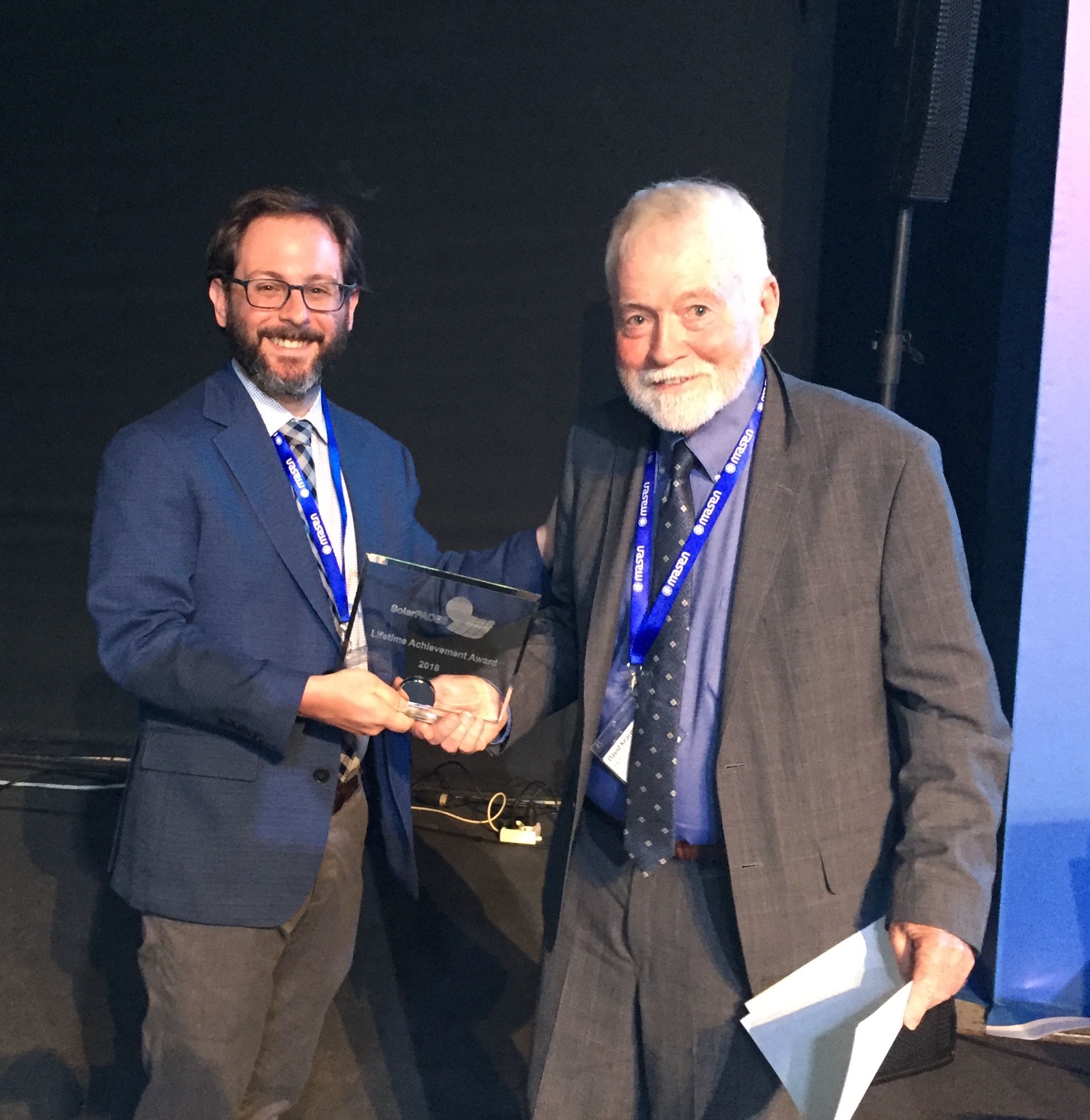 Abraham Shultz (DOE) the SolarPACES ExCo Representative for the US (left), presented the Lifetime Achievement Award to Dr. David Kearney (right) who helped pioneer CSP in the US with Luz during the SEGS design phase, and at SERI, (Solar Energy Research Institute), now the National Renewable Energy Laboratory (NREL).

Winners of the 2017 SolarPACES Awards:

Technology Innovation Award: RoyalTech and WACKER for developing and deploying the world’s first commercial application of a novel Heat Transfer Fluid based on silicon. 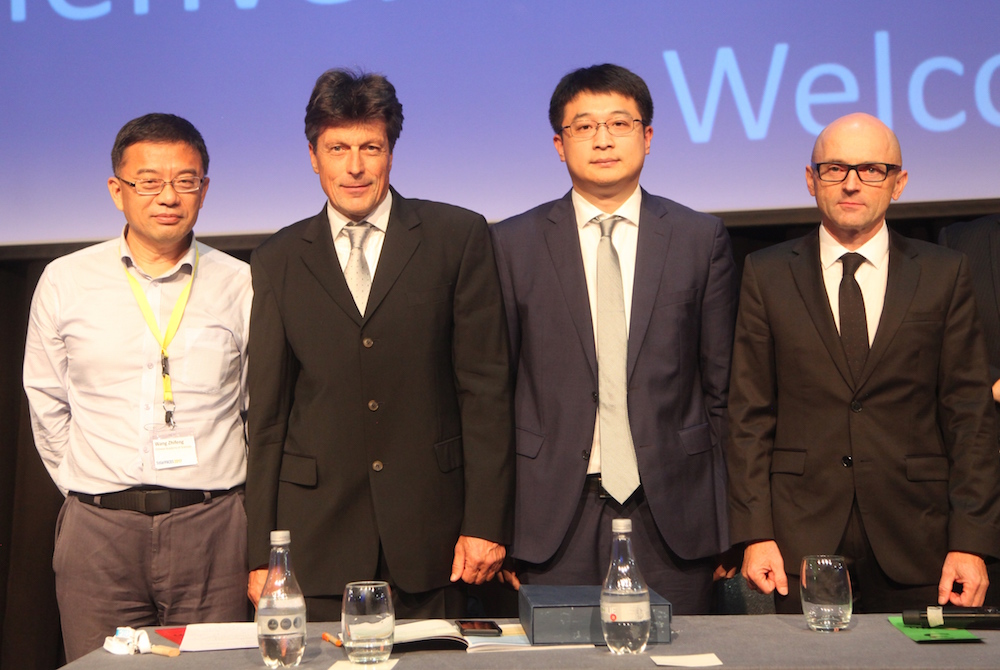 On the closing day of the SolarPACES 2017 Conference in Santiago, Chile, WACKER and RoyalTech received the SolarPACES 2016 Technology Innovation Award for creation (WACKER) and commercial deployment (RoyalTech) of the world’s first commercial application of HELIOSOL, a novel silicon-based HTF.

Winners of the 2016 SolarPACES Awards: 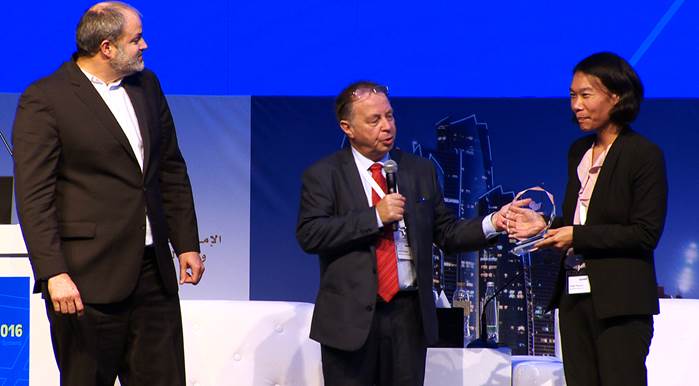 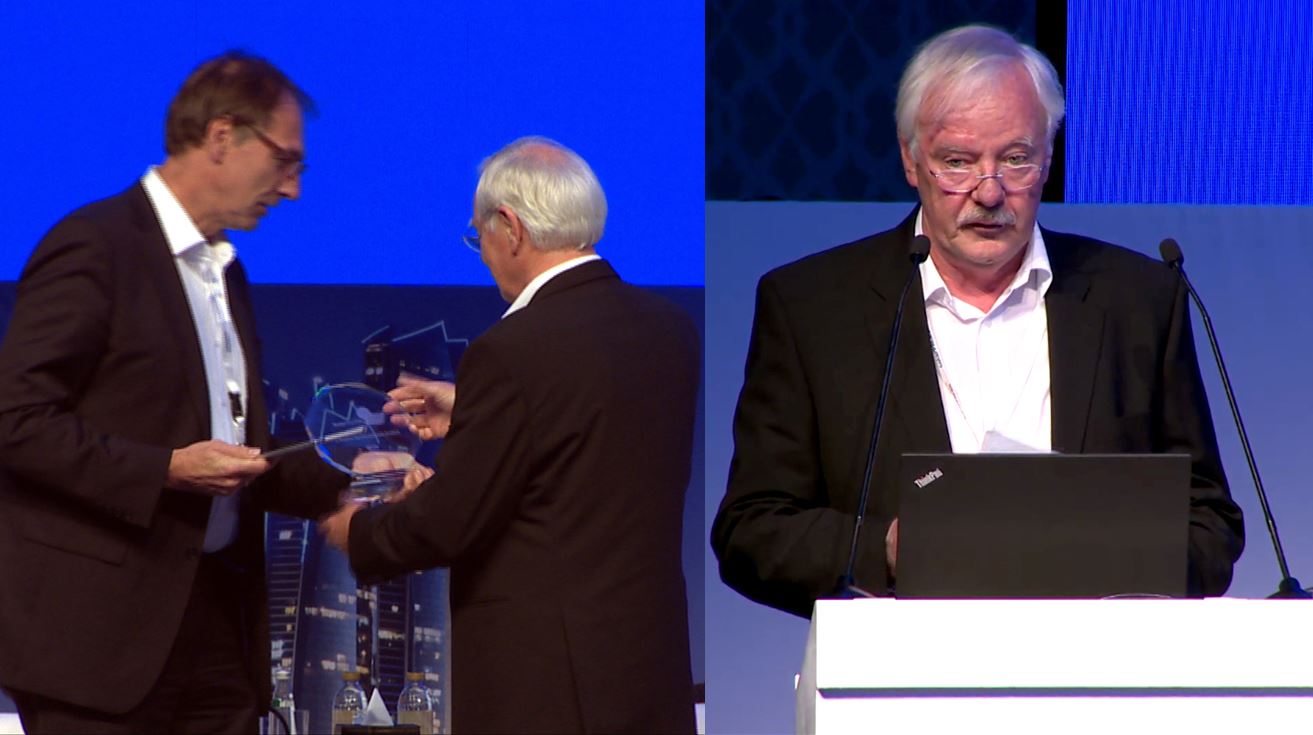 Winners of the 2015 SolarPACES Awards:

Technology Innovation Award: Stellio Consortium for the development of the Stellio heliostat 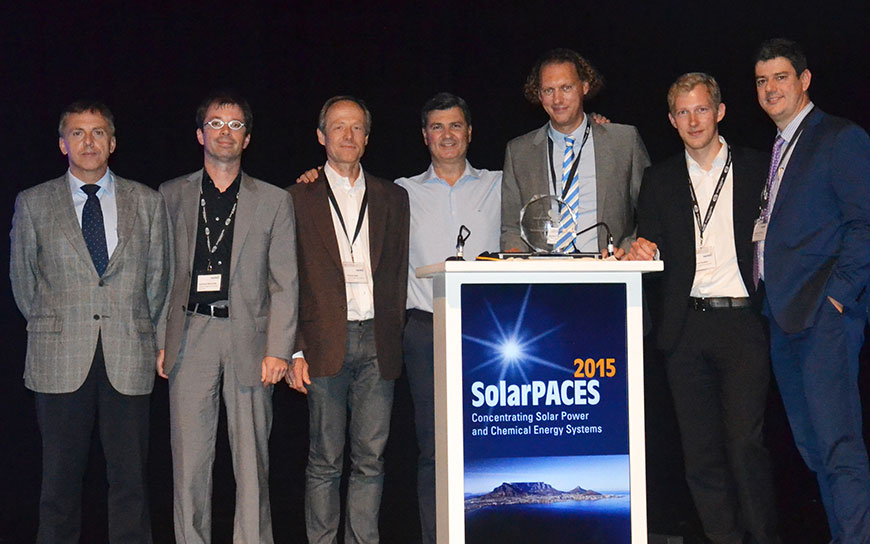 Winners of the 2014 SolarPACES Awards:

The SolarPACES Technology Innovation Award 2014 was given to Dr. Norbert Geuder from CSP Services (left) and Dr. Stefan Wilbert from DLR (right) for their work on Advanced Solar Resource Assessment with Rotating Shadowband Irradiometers (RSI). 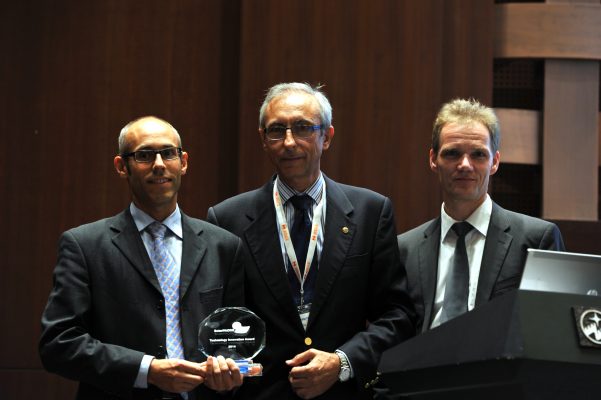 They were represented by Dr. Marc Röger from DLR and Dr. Eckhard Lüpfert from CSP Services who received the award from Dr. Eduardo Zarza (CIEMAT) during the ceremony held at the 20th SolarPACES conference in Beijing.

Winners of the 2013 SolarPACES Awards:

Technology Innovation Award: sbp and Flabeg for the Ultimate Trough 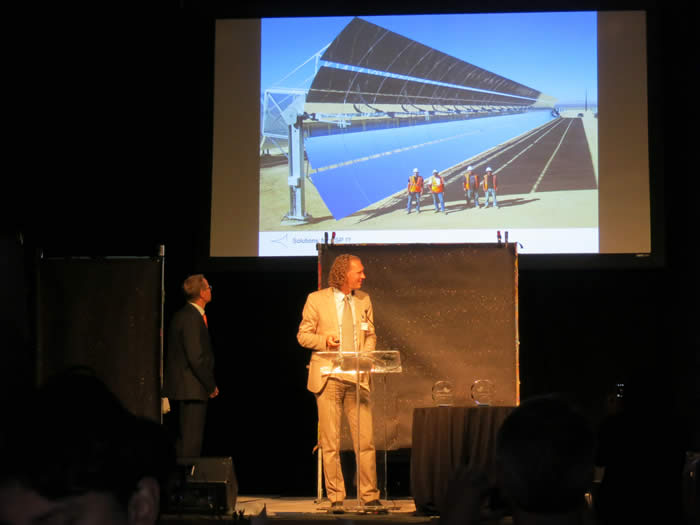 Schlaich bergermann und partner and Flabeg were awarded at the SolarPACES 2013 conference held in Las Vegas with the Technology Innovation Award for the development of the UltimateTrough®, the world’s largest parabolic trough collector. 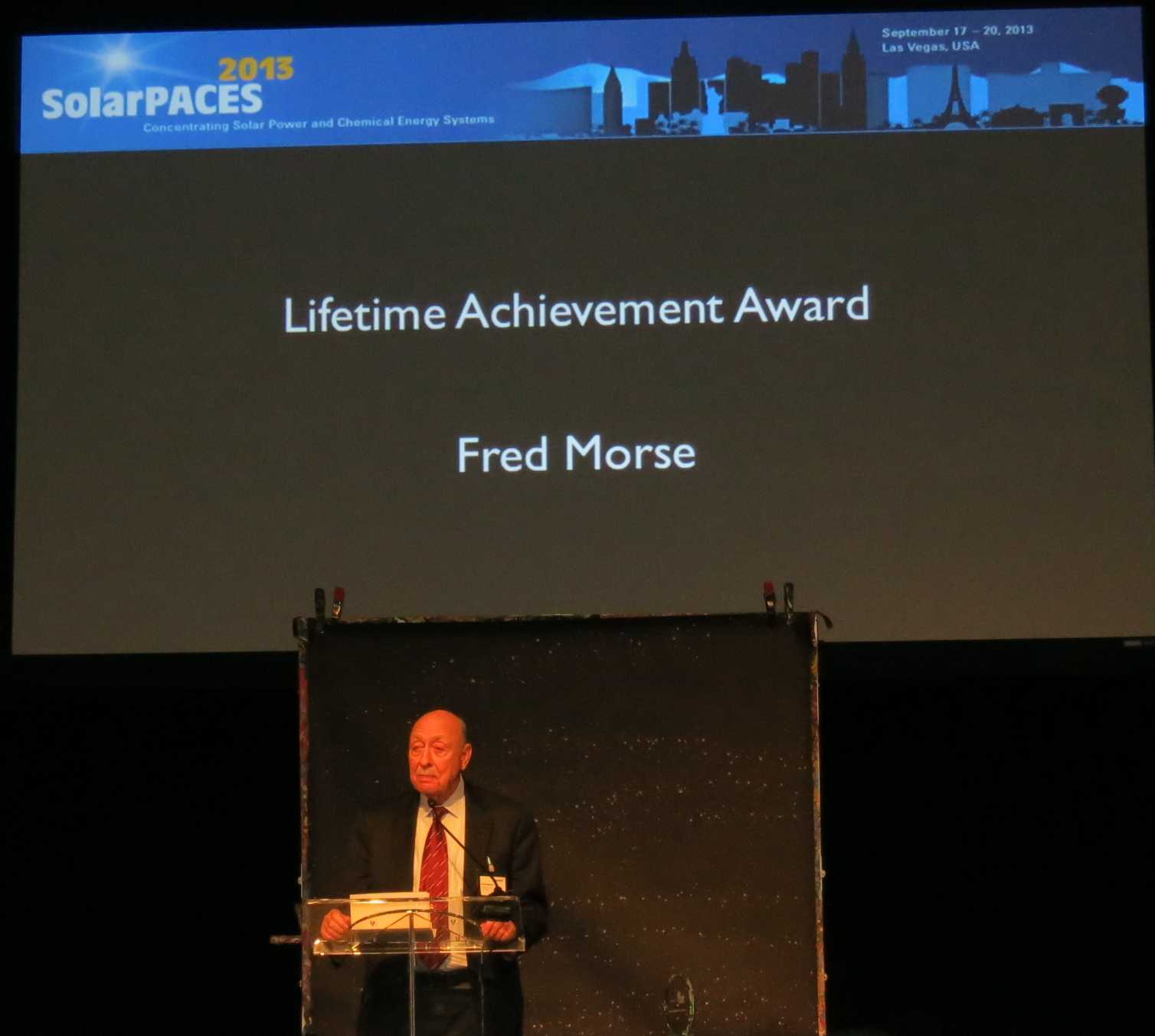 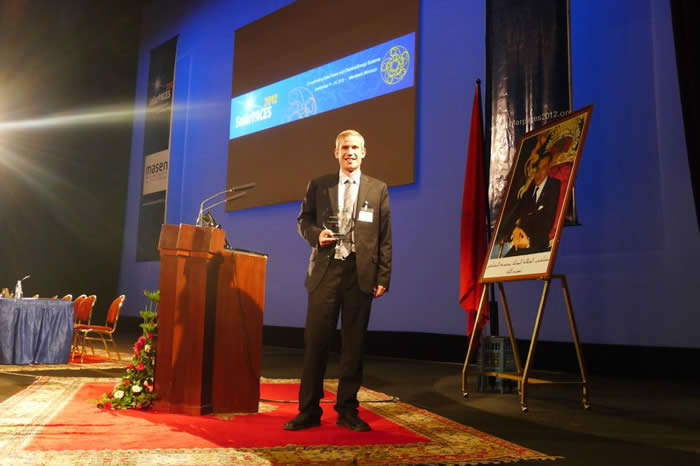 SkyFuel was awarded at the SolarPACES 2012 conference held in Marrakech with the Technology Innovation Award for the development of ReflecTech®PLUS, a high performance reflective film for solar applications incorporating abrasion resistance. 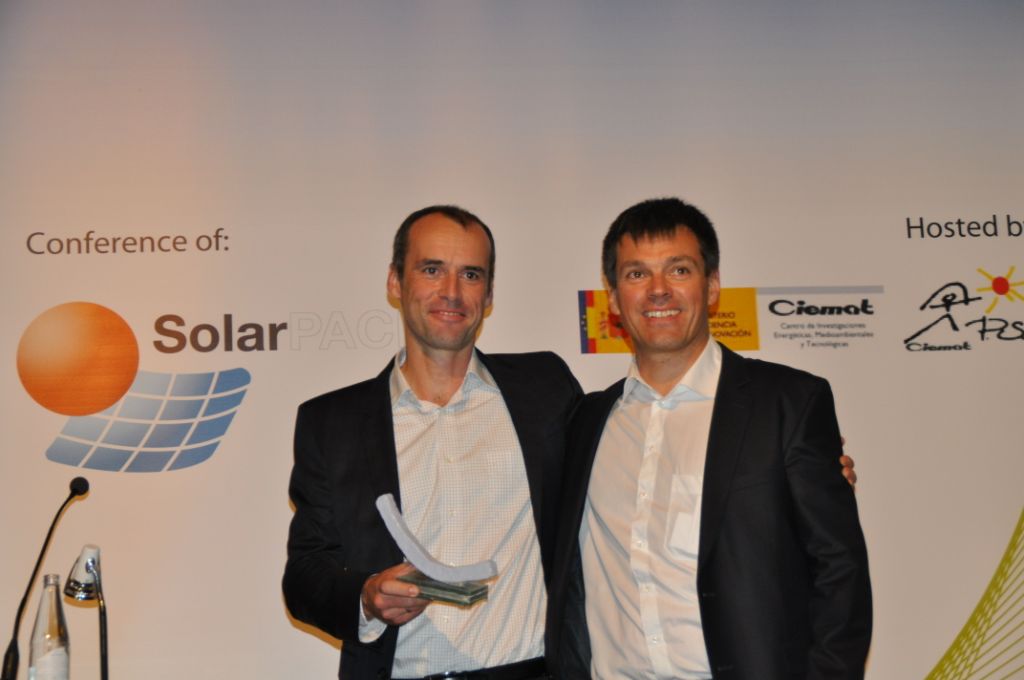 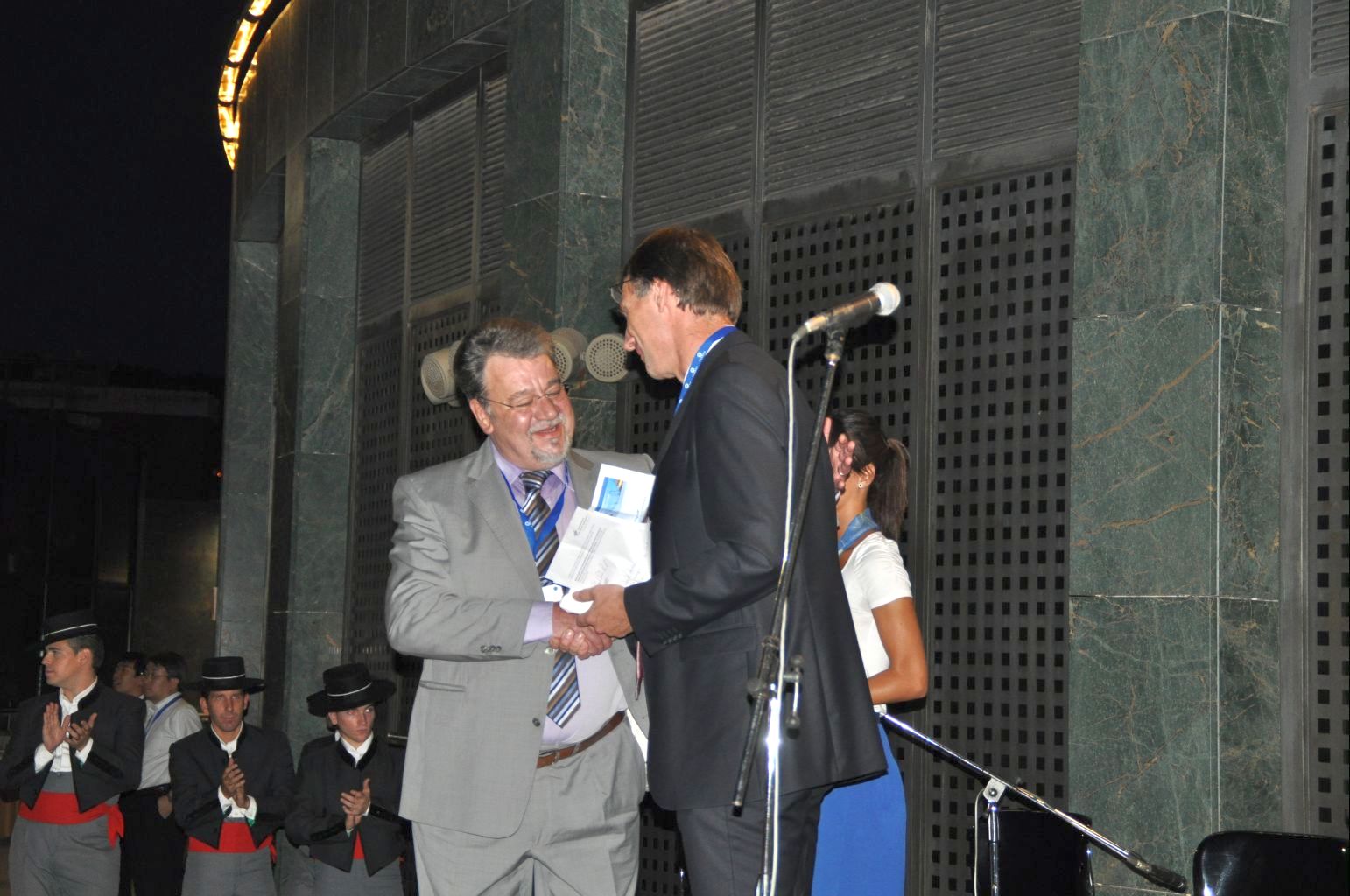 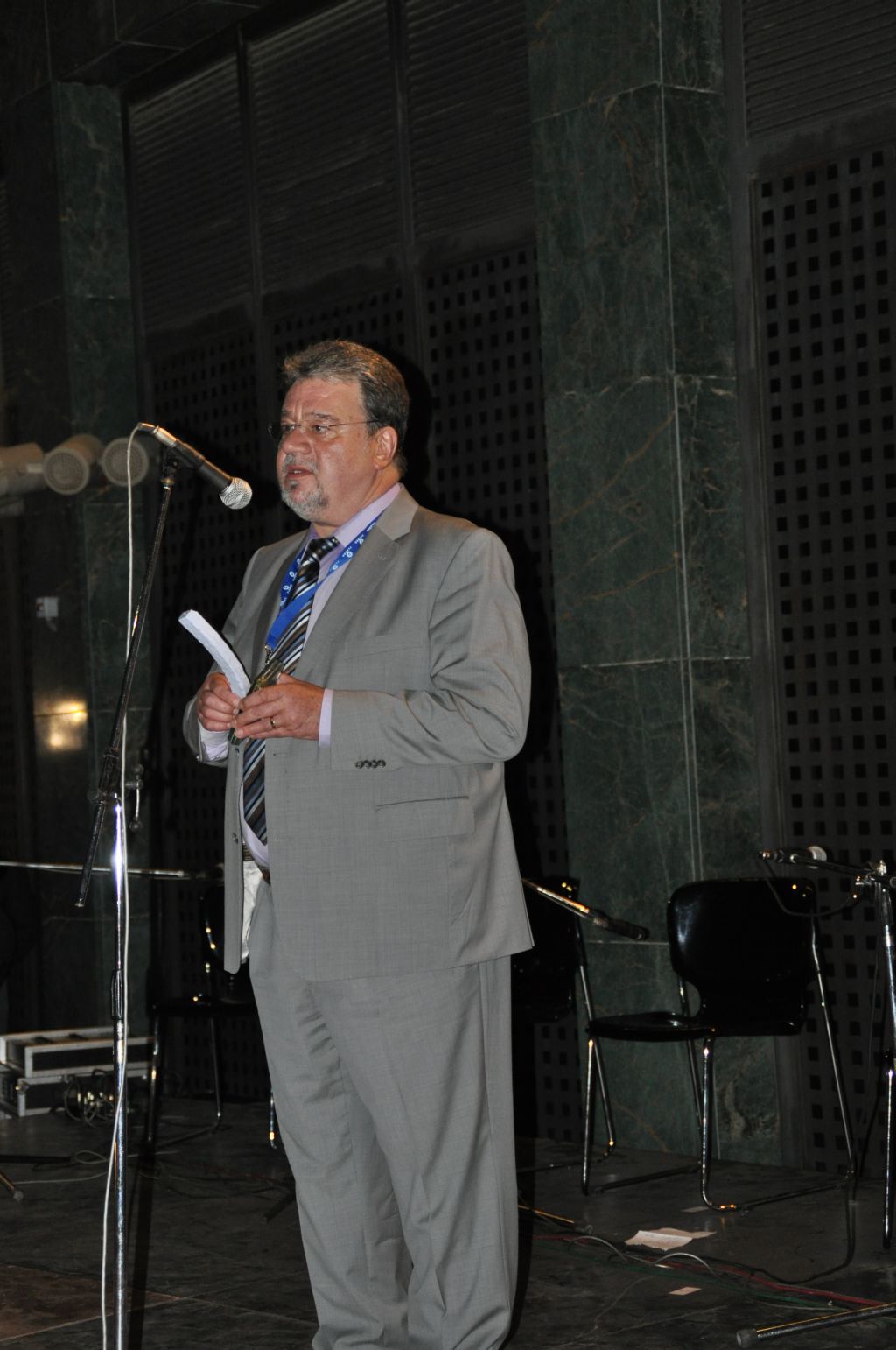 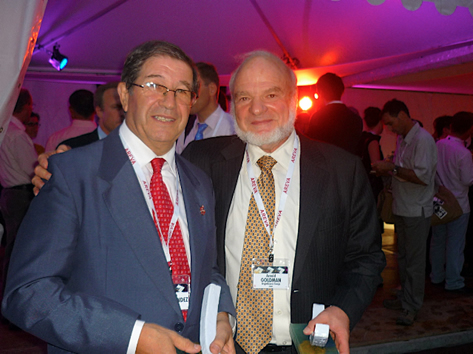 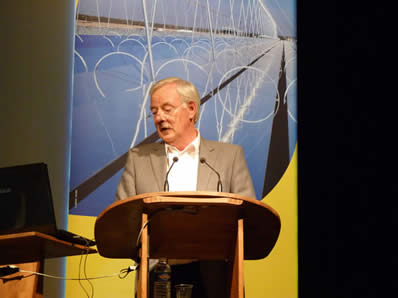 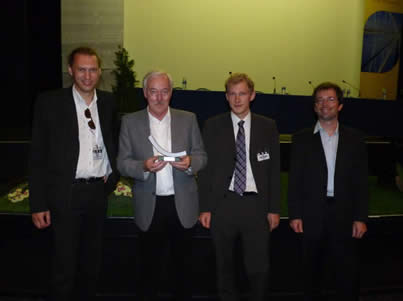 Winners of the 2009 SolarPACES Award: 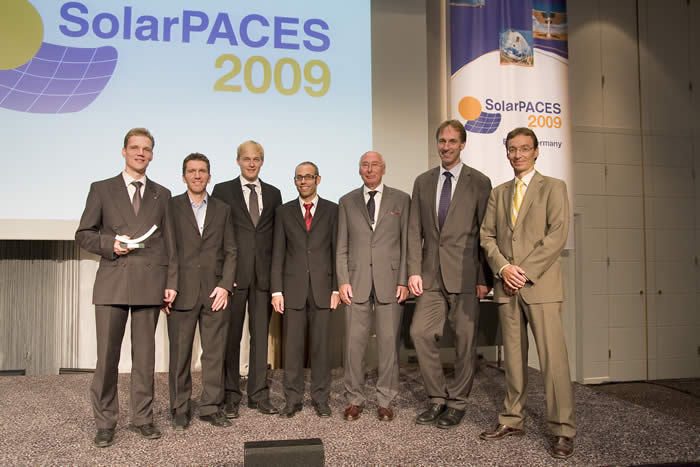 The 2009 Technology Innovation Award was given to the team Dr. Eckhard Lüpfert, Dr. Klaus Pottler, Dr. Steffen Ulmer, Dr. Marc Röger and Dr. Björn Schiricke, from the Solar Research department at the DLR Institute of Technical Thermodynamics for their work in the field of measurement and qualification methods for concentrating solar collectors.

The 2009 Lifetime Award winners in recognition of their decade long contributions to the development of CSP technology were Dr. Manfred Becker, formerly Head of the Energy Technology division at DLR, and Dr. Paul Kesselring, formerly Head of Laboratory for Energy and Process Technology at PSI.