Background:
Unpleasant odors released from sewage plants hinder the social acceptance of wastewater treatment facilities. These emissions contain among other fetid chemicals H2S, mercaptans and amines. However, the possible nuisance to the population is not the only problem associated with the gas pollutants produced in these plants. In fact, at the concentration usually found in the treatment stations, these substances are toxic for the workers and can produce corrosion in devices and building materials. Several treatments for the removal of these pollutants are commercially available but either its efficiency is reduced, or its cost is high.

Objectives:
In order to circumvent these limitations the present project proposes the following objectives: (i) Development of a photocatalytic reactor activated by sun light and UVA lamps capable of continuous operation under real process conditions; (ii) Development of an adsorption treatment system that allows retention of the pollutants present in the gas streams under normal process conditions; (iii) Based on the results of both systems, design and assemble a new coupled photocatalysis-adsorption device to exploit the synergy of both treatments. The achievement of these goals should lead to a drastic reduction in the volume of chemicals currently used to control these emissions, creating a safer environment for plant workers and the neighborhood area. 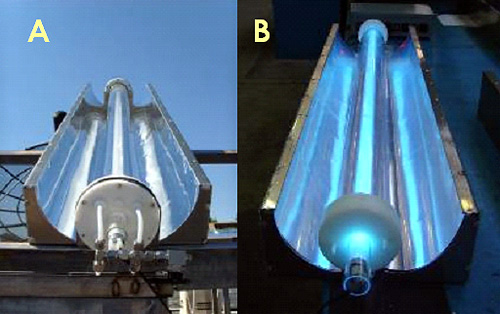 Picture of the prototype hybrid photoreactor for continuous operation, A) under sunlight and B) artificial illumination. Madrid, Spain.