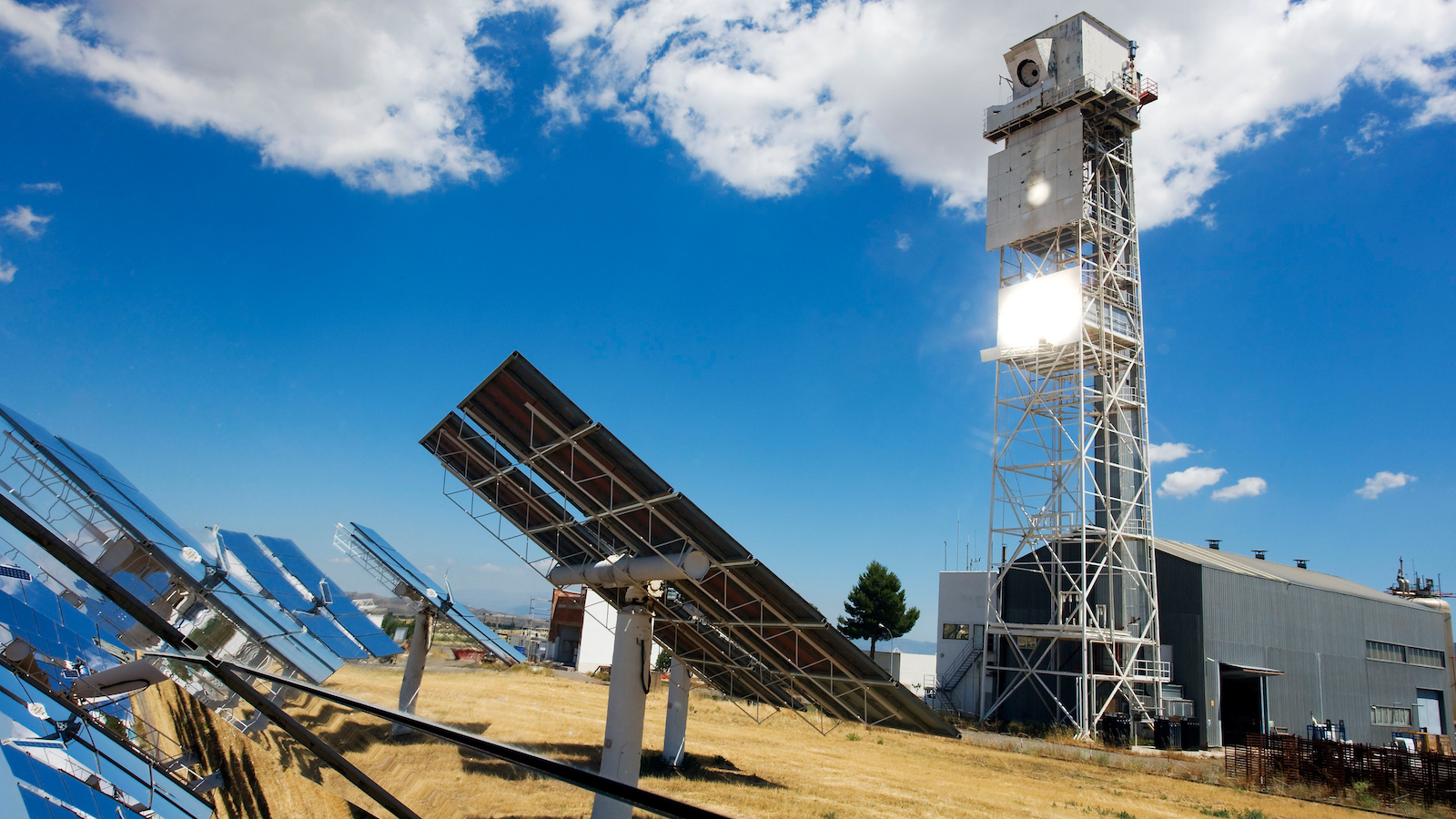 What part will solar thermochemistry play in building a future hydrogen economy?

For an overview, we interviewed a top solar hydrogen expert, Christian Sattler, who holds 18 patents and has authored 158 peer-reviewed papers on the technology.

SK: Why will today’s method of producing hydrogen change?

CS: Hydrogen is produced presently from natural gas in a chemical process at about 800°C to 900°C. You burn natural gas for heat for a steam reforming reaction, to react natural gas with water and get a syngas. This gets reacted a second time and produces hydrogen and carbon dioxide.

But the policy all over the world is to reduce emissions, to keep the temperature increase below 2°C. So it is no longer an option to use a carbonaceous fuel without getting rid of the carbon afterwards, which becomes very expensive.

In densely populated areas, there will be social and political resistance to CO2 storage. People will just say that we don’t want this in our backyard.

SK: Is there any efficiency advantage of solar thermochemistry over solar electrolysis?

CS: Our colleagues have calculated that probably the most efficient way to produce solar hydrogen leverages solar heat for a thermochemical reaction. There are overall efficiency advantages. When electrolysis is powered by solar photovoltaic an efficiency of only 12 percent to 14 percent is reported.

For the thermochemical water-splitting reaction, some solar reactor systems have efficiencies of over 60 percent. The two-step solar thermochemical conversion is still subject to research, but shows a long-term efficiency potential of up to 25 percent.

However, there are also market-driven, industry-driven reasons to use electrolysis. In Germany we have wind power at a time we can’t use. Big utilities operating these wind plants lose billions of euros every year, so we need to store that fluctuating energy.

Even if you have a less than efficient electrolyzer, and you can keep half of the electricity stored in your hydrogen to reuse for power when it is necessary, that is still cheaper than wasting it.

SK: How is solar thermal energy used to split water to make hydrogen?

CS: Heat drives many chemical reactions. Hydrogen is produced now by combustion of natural gas, to chemically pull hydrogen out of a hydrocarbon at a temperature of 800°C to 900°C. Both steps create carbon dioxide emissions.

But in solar thermal (heat) energy, thousands of “suns” can be concentrated by mirrors and focused into a solar reactor to produce temperatures up to 1,500°C. There are no carbon emissions when hydrogen is made by a thermochemical reaction splitting water using the heat of a solar reactor.

When hydrogen is made with solar energy instead of natural gas, the feedstock is water, not a fossil fuel. Solar heat at about 800 C makes the water (H2O) split into hydrogen (H2) and oxygen (O).

SK: Could today’s natural gas plants be converted in the future, to hydrogen?

CS: Yes. Converting from natural gas to hydrogen power stations is actually the major part of the 40-year Japanese hydrogen energy economy plan. The turbines are developed by the major companies in Japan, the USA and Germany. Mitsui’s Ayako Matsumoto has an excellent presentation on the Business Potential of Solar Hydrogen.

Because hydrogen has some special behaviors with metals, you need to pick a turbine that would withstand the hydrogen. So hub parts in the turbine where the hydrogen is fed in need to be coated with ceramic film or an oxide that is a protection layer so that no hydrates are formed, so the hydrogen is not degrading the metal.

Siemens and General Electric have a joint venture on that and their turbines will be about 100 MW. So it is not science fiction. The turbines are ready; the technology is about to be ready.

CS: Definitely. There is a first ship in Norway, a ferryboat with a 1,000 horsepower engine running on hydrogen due in 2020. Viking Cruises announced its first hydrogen ship in September. There’s also a joint venture between Shell and Kawasaki, they have already built several hydrogen tankers, different from LNG tankers, for transporting hydrogen. Japan is implementing a 40-year plan to get to a hydrogen economy, supporting Kawasaki in building the infrastructure, from ships to deliver it to power station turbines to run on hydrogen.

Hydrogen planes flew already in the 1980s, in Russia in the Soviet Union. There were other smaller test planes also operating and there was a design for a big Airbus with a large hydrogen tank on top of the cabin so it is possible.

From a safety point of view, people in the airline industry say hydrogen would be safer than liquid fuel that can ignite when something happens, while hydrogen is gone instantly. However, hydrogen is difficult over the next 20 or 30 years because of existing airport infrastructure and regulations. Carbon-based fuels for airplanes are difficult to replace in the next several decades.

Alternatively, we can make solar jet fuel, by splitting both H2O and CO2 in a solar reactor. In the SOLAR-JET project, Luftfahrt’s assessment confirmed that for any reasonable aviation fuel demand a small fraction of the world’s desert area would provide sufficient sunlight.

How Synhelion’s solar jet fuel started – an interview in 2017

CS: Experimentally, solar reactors range from 1 meter to 5 meters to demonstrate the concept or as pilot projects, depending a little on the technology.  For large-scale fuel production we foresee that a solar hydrogen plant will be much bigger, like a 100 MW solar tower. And like today, these large chemical plants will be a bit further away. They need to be protected. Like a refinery it will not be in your backyard.

At commercial scale most likely you would not build one big reaction chamber but have several smaller chambers close together, at about that size that we have today, at the top of the tower.

Probably you would have a steam generator. There is not much water that you need. You’d pump water through and evaporate it and get the steam into the reaction chamber and hydrogen comes out. You’d have a pretty good conversion, but some water left that would be recycled.

SK: How does hydrogen compare to batteries for storing renewable energy?

CS: Hydrogen is like other fuels, it doesn’t degrade like a battery. It stays hydrogen and does not change its energy content. Batteries have a limited lifetime: they degrade and lose their capacities over time.

Solar Fuels and Electricity by using Sunlight concentrating Systems
C Sattler – 2017 – elib.dlr.de
The production of electricity and fuels by concentrated solar radiation is an
option for efficient large scale processes. The radiation can either be used to replace fossil
fuels for heating established processes like steam or dry reforming of methane. Or at higher

Concentrated Solar Radiation–An Option for Large Scale Renewable Hydrogen Production
C Sattler – 2017 – elib.dlr.de
Converting solar energy efficiently into hydrogen is a key element to develop a
sustainable and affordable hydrogen economy. The presentation will give an insight in how
concentrated solar radiation can be coupled into hydrogen production processes. It will

Solar hydrogen production via sulphur based thermochemical water-splitting
C Sattler, M Roeb, C Agrafiotis, D Thomey – Solar Energy, 2017 – Elsevier
The first technical developments on thermochemical cycles for
hydrogen production are based on the use of sulphur as a redox material. After the oil crises
of the 1970s, high temperature (over 1200 K) heat from nuclear very high temperature