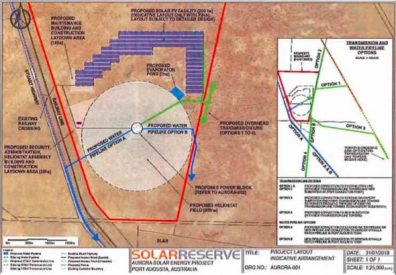 The plans for the additional solar PV are revealed in a development application to the South Australia Planning Commission, submitted in late April, and are designed to lower the costs for the project.

Aurora proposes a 150MW solar tower with eight hours of storage, the largest such facility in the world. The $750 million project is to get funding of $110 million from the federal government.

SolarReserve has also signed a contract with the South Australia government to provide electricity at no more than $78/MWh, after beating out competing tenders from gas plants. The new solar PV installation will help meet that target at lowest cost.

Analysts assumed that the solar tower’s storage facilities would allow it to sell electricity at peak times, helping to meet the low-priced contract with the government.

It would then buy electricity from the grid at other times when the price was low.

The addition of a solar PV facility reduces that arbitrage risk, as it locks in electricity supply – presumably at a lower price than $70/MWh, and can provide more electricity for the solar tower to store. And more that it can sell at peak times.

“Solar PV will supply the solar thermal power station’s electricity demand, which will enable the facility to supply more fully dispatchable elecrricity to the grid,” the submission says.

And it will “reduce the need to draw elecrricity from the grid for station power when the facility is not operating, and enhance the generation capacity of the project.”

A spokesman said a final decision on the solar PV installation had not yet been made, but the company wants to keep its options open.

The combination of solar towers with lower cost solar PV is not unsual. SolarReserve is using the same combination at its proposed facility in South Africa where the Lesedi and Jasper solar PV projects will combine with the Redstone 100MW solar tower.

Solar PV has sidelined many solar thermal projects in the past 5 years because of its plunge in cost – up to 90 per cent by some estimates.

But it is now seen as a means to lower the cost of solar thermal, which is now more valued by grid operators because of its ability to store energy cheaply for long periods.

SolarReserve says the solar tower facility will need electricity to power heliostat trackers, pumps, lighting and associated equipment, including when the soalr thermal power station is not supply electricity to the grid.

SolarReserve expects to lock in financing by the middle of the year and began construction of the project in 2018, for completion in late 2020.

It will have been relieved to see the federal government has retained the $110 million funding promised – on several occasions now – which will likely be used as an equity investment in the project.

SolarReserve recently unveiled plans to jointly fund a transmission line with Oz Minerals, in a move that could open up new mining projects in the state’s north, with renewables and solar in particular as the likely major energy supply.