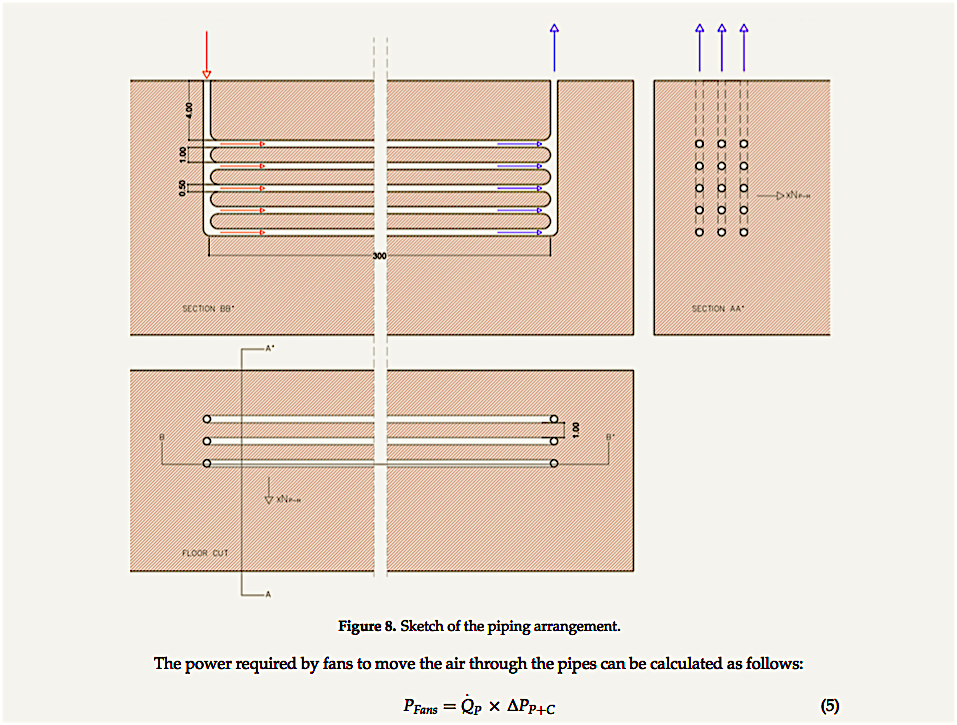 This first concept entails 99 hectares of PVC tubes with a diameter of a half meter, sunk 4 meters below ground, with air pumped through them at 1.5 meters per second. The solar thermal plant used in the study covers an area of about 195 hectares.

“The temperature underground is constant and that’s whether it’s under a desert or in cooler climates. So, we can use this constant temperature and the fact that it is not that far down, about 3 meters, to cool down the ambient air before we use it in a power plant for dry cooling,” explained Fontina Petrakopoulou, Professor of Thermal and Fluid Engineering at the University Carlos III of Madrid, author of the study along with PhD student Eduardo de la Rocha Camba.

The new technique would be a new form of dry cooling. Dry cooling would be especially valuable for Concentrated Solar Power (CSP) plants – the solar thermal form of power which generates electricity using the same steam cycle as coal, nuclear, geothermal and natural gas combined-cycle plants – because they are often located in places with water scarcity and because dry cooling is environmentally superior to wet cooling.

Wet cooling of thermal power plants is widely understood to be environmentally damaging, because it means warmer water is sent out into natural waterways, a thermal pollution that hurts fish. Regulations require that thermal plants must shut down if waterway temperatures rise too high as a result of this thermal pollution.

Their paper, published at Energies this month; Earth-Cooling Air Tunnels for Thermal Power Plants- Initial Design by CFD Modelling was inspired by the concern that in the future, water stress in already arid regions suitable for CSP will further impact the viability of wet cooling.

It cites the increasing numbers of thermal power plants being shut down as climate change itself raises existing water temperatures closer to those thermal pollution limits that harm fish: “because if the water temperature is high, plants cannot operate efficiently. In addition, because they are not allowed to exhaust the water at high temperatures, they may have to operate at part load or cease operation,” she noted.

What needs to change in dry-cooling technology

Petrakopoulou pointed out that the alternative to wet cooling, dry cooling, also has environmental problems.

“The environmental impact of the dry-cooling system is a very important issue that has been neglected,” she told SolarPACES in a call from Spain. “With dry cooling you use air as the cooling medium and then you expel that air at a higher temperature than the ambient temperature. So let’s say you bring it in at 35°C – you may return it at 45°C.”

This is especially pertinent for solar thermal energy in particular as surrounding ambient air tends to be already warmer in desert climates where CSP plants are most likely to be built. But because of the energy needed, dry cooling also has an efficiency cost.

“Two of the main drawbacks of existing dry-cooling systems are that they are less efficient than water cooling, and second that they are more expensive. Low efficiency in a fossil plant means more fuel and more emissions, but something similar goes for solar plants too. As they would need a larger surface area of heliostats to capture the solar radiation, they do not operate as efficiently as with wet cooling. Cooler air allows us to increase the efficiency of the plant to levels that are comparable to water-cooling systems. This is one thing that we are aiming for with the new system.”

A new approach to dry cooling

This new dry cooling solution draws on the shallow earth-air systems currently used to cool small-scale residential or industrial buildings by circulating air (or sometimes a fluid) in tubes from a few meters underground in a closed loop from where the temperature is cooler and circulating it in pipes throughout the building above. Temperatures below 3 meters underground are consistent worldwide, typically around 20°C.

“I have been thinking about this problem for several years, and then the specific design of this system was inspired by trying to figure out a way to increase the efficiency of dry cooling systems. Using air at ambient atmospheric temperatures means the steam coming out of the steam turbine cannot reach very low pressure. And that affects the efficiency of the plant,” said Petrakopoulou.

The study looks at first cooling ambient air underground by 10°C to counteract the ~10°C it gains doing the dry cooling. This is what sets it apart from existing dry cooling, which simply uses ambient air.

“In this specific example we are assuming the ambient air is 35°C. We will cool the 35°C air to 25°C underground, and we will put it into our plant at 25°C, so what enters the condenser is 10 degrees below ambient air. This way when the process heats it by 10°C it will come out at 35°C, the same as the ambient temperature,” she explained.

“That was our specific example. It doesn’t mean it’s always like that. The temperature of the air can be higher. It can get even higher than 40° C in desert regions. In that case the system would still work in the same way and reduce the air temperature. For example, it would go into the condenser at 30°C and come out at 40°C, but we would have to have a slightly different design.”

Petrakopoulou and de la Rocha Camba analyzed the viability of the idea using computational fluid dynamics (CFD) based on a hypothetical 20 MW CSP solar tower and underground temperature of the arid Iberian Peninsula. This first concept entails 99 hectares of PVC tubes with a diameter of a half meter, sunk 4 meters below ground, with air pumped through them at 1.5 meters per second. The solar thermal plant used in the study covers an area of about 195 hectares.

The researchers compared the trade-offs between efficiency and costs of fewer larger PVC pipes versus more smaller ones, with air pumped through it at different velocities, but note that the novelty of the concept leaves a lot open to future new research, including ideas for how to reduce land use and ways to increase surface contact between the pipes and the air.

The objective is not only to cool the air down to the desired temperature but to also achieve it with the minimum number of pipes through an optimal diameter and flow velocity, as well as an acceptable length and pressure drop.

“The design that we have proposed at this point is very simple, just say five parallel rows of tubes. We want to look at different designs and see how the heat transfer can be improved and, in this way, of course improve the economics and the surface area. What we wanted to do for this first step was to study the different parameters that play a role in the heat transfer and see if the system can work in a satisfactory way, and give realistic surface requirements,” she said.

The next step will be a detailed economic analysis, to see if the proposed system can compete when it comes to materials and investment costs; a thorough evaluation of the economic and environmental viability compared to existing wet and dry cooling systems, providing useful information for CSP developers as the value of water continues to increase with climate change.