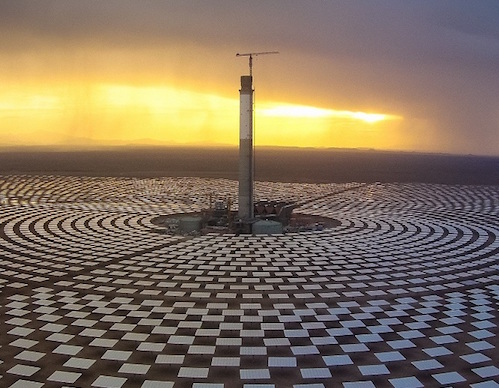 ACWA Power will use learnings from its Noor CSP project in Morocco which also uses tower and trough technology.

The project represents the fourth development phase of the Mohammed bin Rashid Al Maktoum (MBR) Solar Park which will host 1 GW of solar capacity by 2020, rising to 5 GW by 2030.

ACWA Power’s plant is expected to cost AED14.2 billion ($3.9 billion) and ACWA Power is to commit $750 million equity to the project. Consortium partners will include China’s Shanghai Electric and DEWA has also said it plans to invest in the plant.

The project represents the world’s largest single-site CSP plant based on the Independent Power Producer (IPP) model and will use a combination of central tower and parabolic trough technologies.

The tower will be 260 meters high, equivalent to the Emirates Towers skyscrapers in Dubai. The plant will use molten salt storage to produce power through the night and complement rising daytime PV capacity.

“Opex [Operational expenditure] savings can also be achieved using common infrastructure and operations and maintenance personnel in the UAE,” he said.

DEWA received 30 Expressions of Interest for the CSP project, represented by 34 regional and global companies. Six consortia were shortlisted for the Request for Proposal (RfP) phase.

Dubai had targeted a cost of $80/MWh but technology and efficiency gains in other countries had indicated lower costs were possible.

DEWA called for twin tower technology designs but said alternative designs could be submitted provided they fulfilled tender criteria. Plants had to be able to generate power from 4 pm to 10 am, requiring bidders to focus on cost-efficient storage designs.

ACWA Power’s tower system will provide fifteen hours of storage while the trough section will provide eleven hours. The combination of technologies will help to reduce the total cost of energy, Lovato said.

“Parabolic troughs are a more mature and low-risk technology while tower technology and energy storage help reduce costs,” he said.

While current installed CSP capacity is dominated by parabolic trough systems, data from the CSP Today Global Tracker shows that solar towers account for nearly half of global capacity under construction and 70% of projects under development. Recent growth in tower deployment is mainly driven by the ability to achieve higher temperatures than other CSP technologies, raising plant efficiencies and providing lower storage costs.

“Use of this [combination of] technology has allowed for increased storage capacity,” Lovato noted.

CSP plants under construction in the Middle East 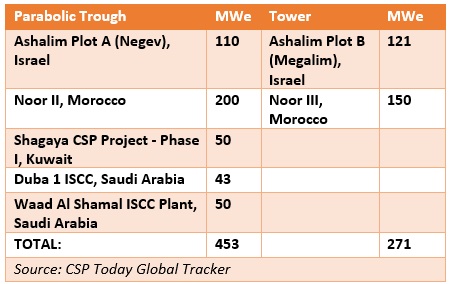 DEWA’s tender criteria did not enforce local content requirements and Shanghai Electric’s involvement in the engineering, procurement and construction of the project will help drive down costs.

Shanghai Electric is currently building CSP capacity in China as part of the country’s ambitious targets to complete 20 CSP projects of total capacity 1.3 GW by 2018. This first batch of Chinese projects is expected to accelerate deployment efficiencies and build out China’s CSP supply chain.

“In order to deliver reliable power at the lowest possible cost, ACWA Power looks to incorporate local content where possible, as well as work with our existing network of suppliers in the markets where we operate to achieve economies of scale and reduce cost,” Lovato said.

The creation of a domestic CSP industry in China will allow EPC contractors to export their expertise and this will further reduce costs, he said.

“This will please developers and offtakers in the MENA [Middle East and North Africa] region because it will cut prices dramatically,” Lara said.

The power purchase agreement (PPA) and financial closure of the project are expected to be finished “shortly,” DEWA said in a statement.

The record-low CSP price for the Dubai project comes as several other Middle East and North Africa countries look to take advantage of strong solar resources and diversify from hydrocarbons.

UAE and Morocco have been front-runners in solar power development but countries such as Saudi Arabia and Kuwait are accelerating deployment.