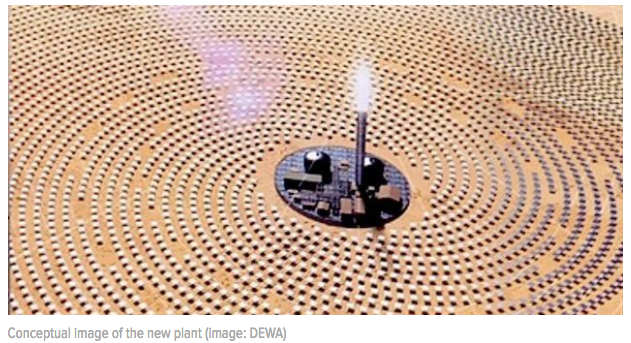 Saudi Arabia’s ACWA Power and China’s Shanghai Power have been selected as the winners in the Dubai Electricity and Water Authority (DEWA) competitive auction, for the world’s largest concentrated solar power (CSP) plant at 700 MW.

Sheikh Mohammed bin Rashid, Vice President of UAE and Ruler of Dubai, hailed the launch of the world’s largest plant, a milestone in the emirate’s ambition to generate 75 per cent of its energy needs from renewable sources by 2050.

DEWA said on Saturday that it had selected Saudi Arabia’s Acwa Power and China’s Shanghai Power to build a 700MW extension to the Mohammed bin Rashid Al Maktoum Solar Complex, providing more than three times the capacity of the initial plans for the extension.

Under the terms of the contract, the new plant will deliver energy at 7.3 US cents per kilowatt-hour (kWh). The project will have the world’s tallest solar tower, measuring 260 metres.

“The implementation of the largest CSP plant in the world demonstrates the UAE leadership’s commitment to the production of clean and renewable energy, and entrenches our place among the most advanced countries in this industry,” said Sheikh Mohammed on Saturday.

“We will continue to implement projects that serve comprehensive development directions in our state and advances the ambitious goals we have set for the future, which we will start implementing today.”

Dewa had previously accepted a bid in June for a 200MW extension to the solar park, offering electricity at 9.45 cents per kWh.

The new plant will come online in stages from 2020 and is expected to cost Dh14.2 billion to build. The power purchase agreement and the financial close of the deal are due to be finished shortly.

“Awarding this strategic project supports the vision of His Highness Sheikh Mohammed bin Rashid Al Maktoum, Vice President and Prime Minister of the UAE and Ruler of Dubai, to promote sustainability, and make Dubai a global centre for clean energy and a green economy,” said Saeed Al Tayer, the managing director and chief executive of Dewa.