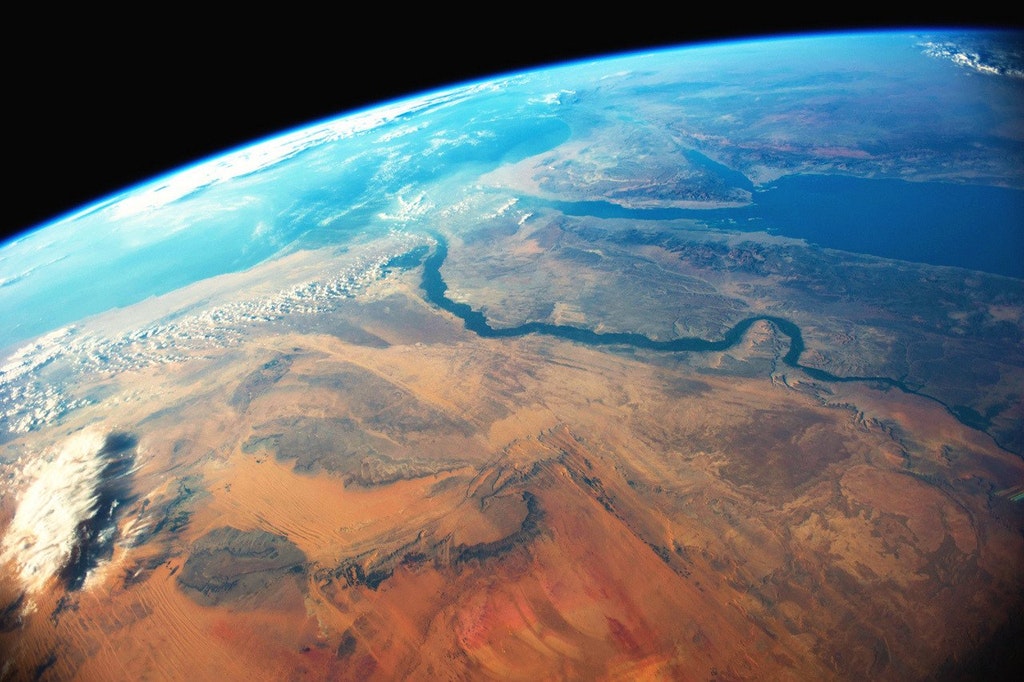 Many of the regions most in need of desalination could desalinate with solar, but which kind of solar? What about after dark? And which desalination technology? IMAGE@ International Space Station

But supplying an ever-increasing basic need with non-renewable fuels creates a growing threat, according to Dr. Diego-César Alarcón-Padilla, who heads the Solar Desalination Unit at Plataforma Solar de Almería (PSA) and is Operating Agent of Task VI of SolarPACES.

“Today there is no large capacity desalination plant that is working using renewables” said Dr. Alarcón-Padilla. “There is none.”

“With desalination we introduce a new consumer of energy. With climate change, and the increase of the human population, and the contamination of the current water resources, year after year we need more and more freshwater,” he said.

“Desalination needs energy. And today we are already in the limit in the use of fossil sources, just for recurring demand. If we are serious about meeting our Paris commitments keeping the temperature of the planet to the 2°C rise, we must desalinate with clean energy.”

It took legislation to first put new renewables like solar and wind onto electric grids. Regulators began requiring generators to include renewable energy in the early 21st century. Mandates and subsidies jumpstarted the transition.

To now develop renewable desalination, Dr. Alarcón-Padilla proposes the adoption of similar policies. “We need something like a premium per cubic meter of water produced by this solar desalination plant, or a guarantee from the state that they are going to purchase each cubic meter of “clean” water that is required by the public. Just like we had a feed in tariff for electricity produced by renewable energy plants here in Spain.”

At current prices, and depending on regional differences, he estimates that CSP could deliver fresh water from modern desalination at around 80 cents USD per cubic meter – about 30 cents more than fossil fueled desalination.

Once policy drove it, renewable projects were deployed and supply chains developed. Renewable prices dropped. Now, regulators in some cities, states, and countries are setting targets as high as 100% renewable electricity by 2050. What seemed risky initially turned out to be not so hard. In many regions, solar and wind is now the low price option.

Why desalination is a conservative industry

Desalination began first in the 1950s in the parched Middle East, with thermal desalination technologies driven by plentiful fossil energy.

He detailed the challenges and opportunities for a similar transition to 100% solar desalination.   “Saudi Arabia and Kuwait and Bahrain; all of their water comes from desalination. They only have water underneath for a few days, so they cannot afford to take any risks,” he explained.

“So you can imagine, this industry is very conservative, where water reserves are very low. The population grows year after year in the Arab countries. And the freshwater resource does not grow: they cannot have the luxury of failure in implementing a desalination plant.”

The Arabian Gulf is an enclosed sea, with no freshwater rivers feeding into it, and high temperatures increase evaporation, further increasing both salinity and temperature.

“There are some places where you can get around 45 or even 50 grams per litre (g/L) of salt. In addition, you can have oil spillage and algae blooms that could cause a failure in the pretreatment system of, for example, a reverse osmosis plant,” he said.

Thermal desalination is a proven technology well suited to the harsh conditions in the Gulf, but from an energetic viewpoint is quite inefficient compared to today’s more widespread reverse osmosis. But such “difficult” seawater can damage membranes, stopping a reverse osmosis plant:“So they’re not going to abandon thermal desalination technologies completely. They want to have both.”

Initially solar thermal energy was proposed as best suited to thermal desalination processes, which essentially use heat to evaporate water.

“And recently, a lot of research is being done in developing new heat exchange surfaces based on polymeric materials for thermal distillation plants. Such developments can substantially reduce the impact of the investment cost in the final cost of the fresh water.”

However, the heat for thermal desalination is necessarily located at the site of the desalination plant, which creates a challenge.

“There are two problems with CSP for desalination at the coast: salt air corrosion, and that the solar resource is not so good as inland. So there’s a penalty in electricity and fresh water costs,” he noted.  “With the current status of the technology, the best option is pairing a CSP plant inland, where it’s away from the saline ambient effects, with reverse osmosis desalination at the coast.”

This is because electricity to run reverse osmosis can always be transmitted from further inland, but the heat used by thermal desalination cannot be sent from elsewhere, it has to be where the desalination plant is.

The thermal option, where salt air and solar resource allows, is to tap waste heat at a steam turbine outlet of a CSP plant delivering electricity to the grid, and using the waste heat for desalination: for CSP Co-Generation.

For example, the waste heat that dry-cooled CSP plants produce water at in winter is about 50°C, and about 60°C in summer, which is close to the temperature needed by one thermal desalination technology, low-temperature multi-effect distillation (MED) which needs water temperature at the inlet to be around 70°C. So here the desalination utilizes waste heat, and this can be cost effective in some cases.

“The feasibility of this option versus the separated production of electricity and desalinated water – using part of that electricity – depends on two factors: the degree of penalty in power production introduced by establishing a higher pressure value for the steam at the outlet of the turbine (required by the thermal distillation plant) and the specific investment cost of the distillation unit.”said Dr. Alarcón-Padilla. 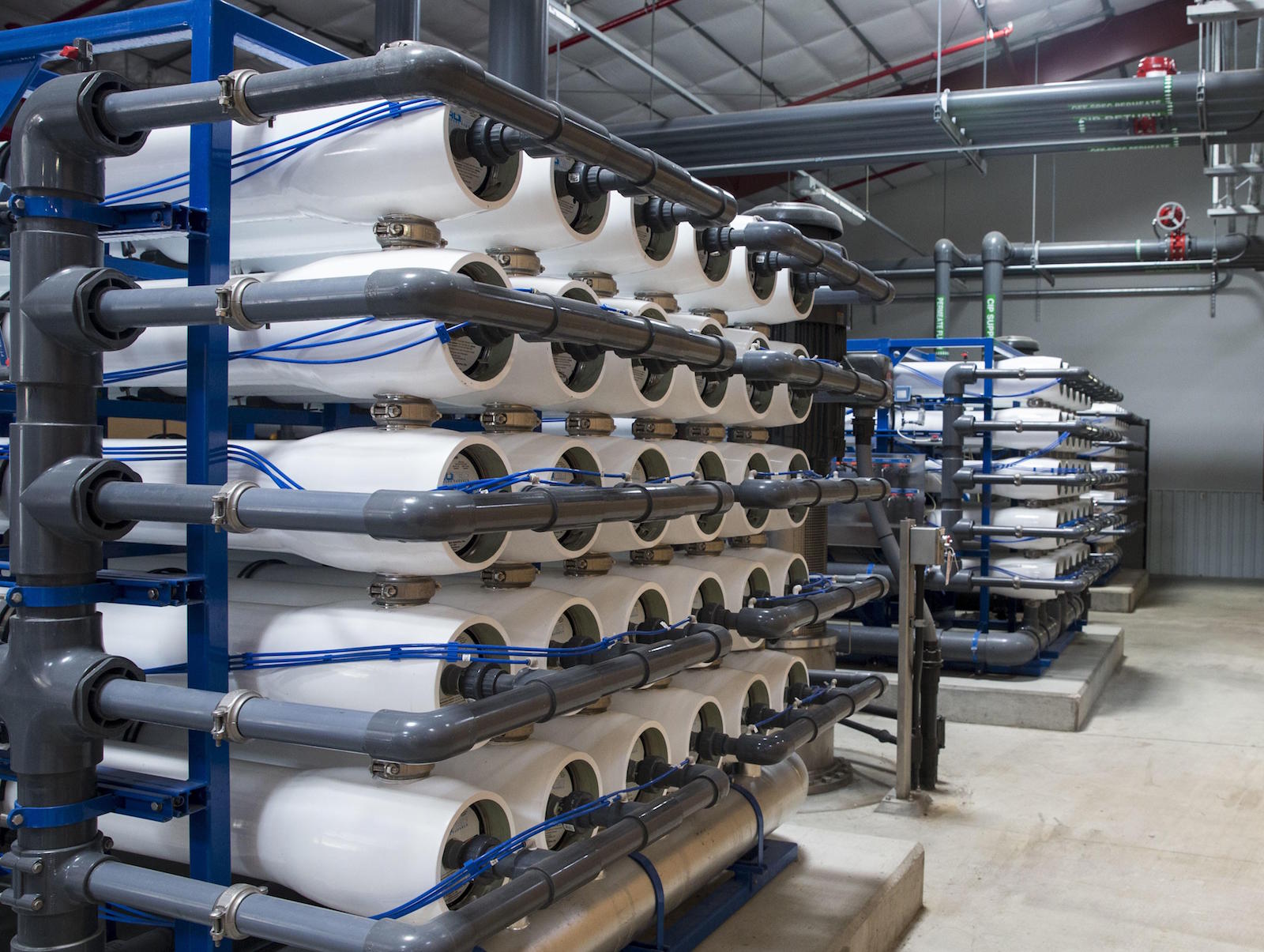 Why CSP is better paired with reverse osmosis (RO)

Today’s predominant desalination technology uses a process where only electricity is used, sending power round the clock to pump water through a series of membranes to extract the fresh water through reverse osmosis (RO).

“In most of the world, for desalination applications at industrial scale, a CSP plant coupled to an RO plant which uses electricity for the power plant would be a better option than coupling it with thermal desalination,” he noted.

“But the Middle East with higher salinity, 40 to 45 g/L, has higher electricity consumption, because you need a higher pressure, so typically they need up to 4.5 kWh per cubic meter.”

Alarcón-Padilla contends that the only truly 100% solar desalination is with CSP, due to its ability to supply firm energy for long durations with thermal energy storage (TES).

Citing the recently announced Metito plant in Saudi Arabia, reportedly powered by solar PV, he noted that when night falls, the plant will switch to grid power. “For me this is not solar desalination,” he said. “True solar desalination is when you face the challenge of dealing with a variable source of energy like solar. CSP can deliver a very flat profile. It has an advantage due to its dispatchability.”

“In principle PV looks cheaper, but you have the problem of no dispatchability. The energy delivery is not flat. It is variable along the day. In addition PV doesn’t have cheap storage available for large capacity.”

Desalination cannot be turned off when clouds pass. If the plant stops, the salt becomes crisp and forms a crust on the membrane.“You can have scaling problems in the membrane if you keep turning it on and off,” he pointed out.

As a result, when PV is proposed, it must be backed up to the grid, resulting in much less than 100% solar desalination: “When this “solar” desalination plant is taking electricity from the grid, for me this is just a PV plant that puts electricity into the grid”

The same issue applies to CSP with no storage, of course. At sundown, without stored energy, CSP would also switch to grid power. Storage also helps financially: “You want to keep the RO plant working the maximum number of hours to reduce the impact of the investment cost and the final cost of the water.”

But there’s more than one way to store solar. In addition to CSP’s thermal storage, both solar technologies can simply store any of their surplus “spilled solar” in fresh water, increasing a plant’s profitability.

“Storing energy is very expensive but storing water – just in a normal water tank – is very cheap,” Alarcon-Padilla noted. “When electricity demand is low you can put the desalination modules in operation in order to produce more freshwater.”