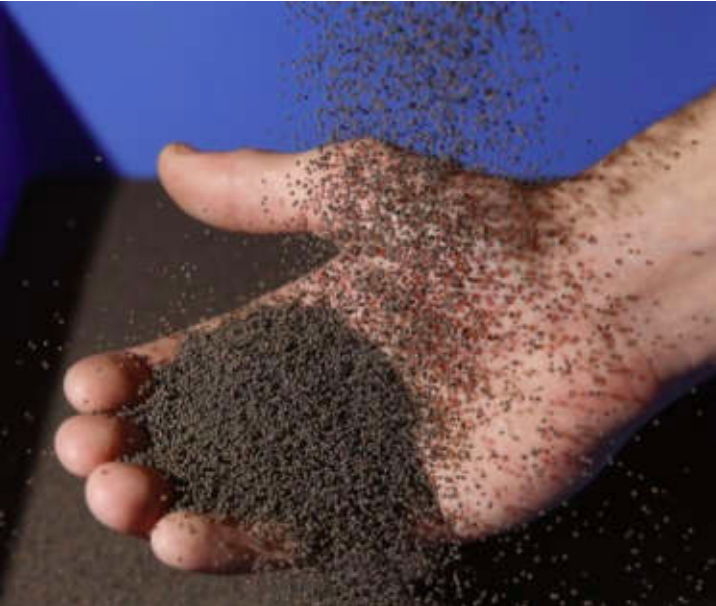 Three teams of research institutes and supply chains initially competed in a three-year competition funded by the US Department of Energy to develop a next-gen high temperature CSP with long duration storage; able to cut cost to 5 cents per kWh and run at 700°C to pair with a high temperature Brayton sCO2 power cycle.

The team led by Sandia won the $25 million dollar prize that has now enabled them to build a pilot plant to demonstrate at scale that they meet the DOE cost and performance goals with their design, laid out in Overview and Design Basis for the Gen 3 Particle Pilot Plant (G3P3).

The Sandia team’s novel aspect is that it will transfer and store the sun’s heat in particles, not liquids. Particle technology marks a 3rd generation of CSP. The first rounds of CSP projects had liquid-based thermal energy transfer, either in steam, hot oil or molten salts with a maximum temperature of ~600 °C.

Globally, solar engineers including at Sandia have been developing a new way of utilizing the sun’s heat. The solar energy is instead carried and stored in particles, which get heated by solar irradiation in various ways, such as being rotated in a “cement mixer” type of receiver, or while falling in an open receiver as the Sandia team is doing. A solar field of mirrors concentrates reflected sunlight up to a receiver atop a tower to heat the particles that carry the heat to storage tanks and on to a thermal power block to generate power. 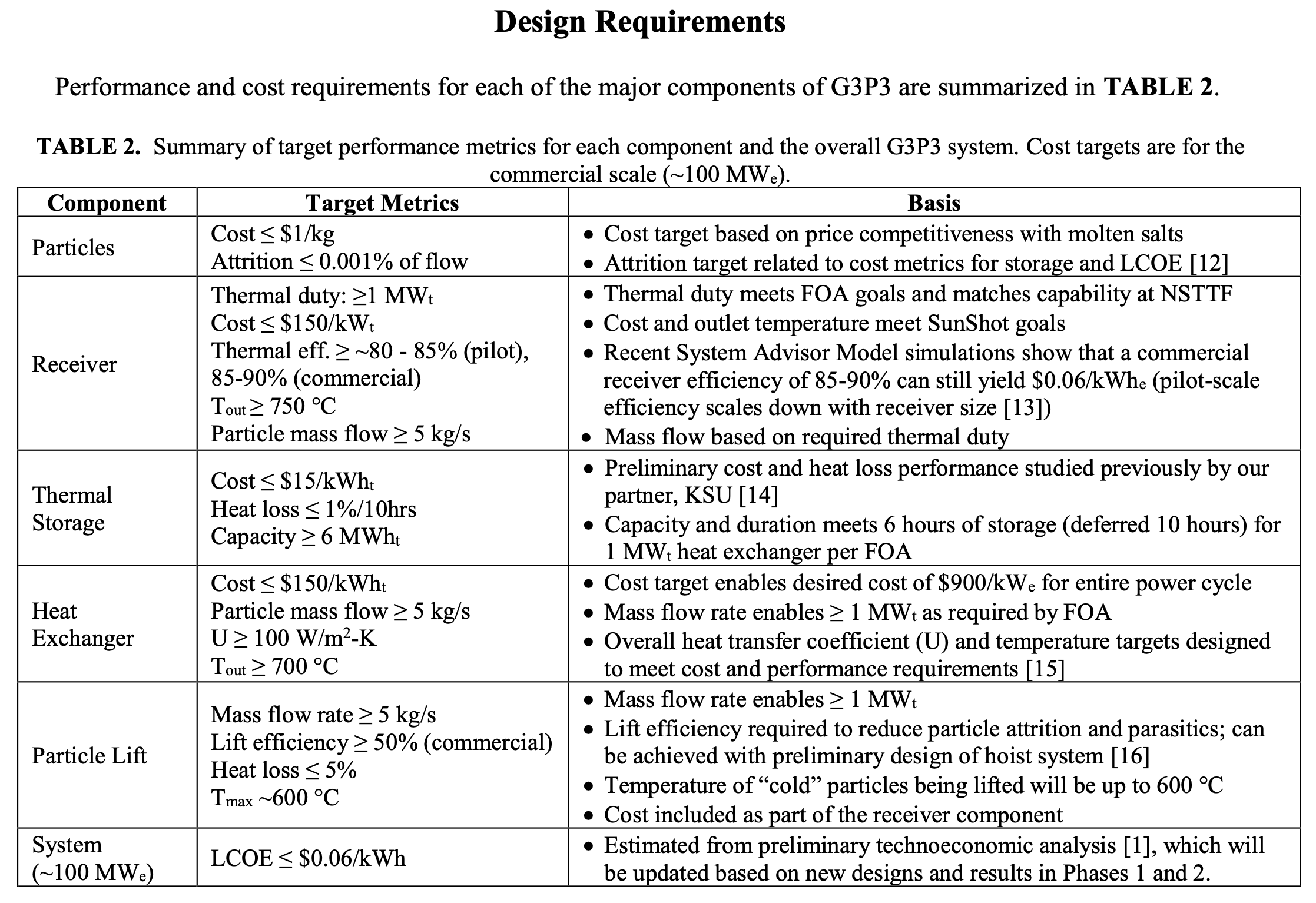 During the first three years of the competition, Sandia modeled a techno-economic analysis of the integrated designs for a 1 MWt high-temperature falling particle receiver system and showed that even in a small drop height of one to two meters and falling speed of between one and seven kilograms per second, the direct irradiance permits very high particle heating rates, and could achieve particle temperatures over 700°C.

With the award, they now have the opportunity to resolve engineering issues at scale by building the system and and operating it over thousands of hours to prove the design, while finding and fixing the issues that show up over time. The tower will be built at the existing test site at Sandia that has an existing 6 MWt solar field of heliostats.

“The objective of the Gen 3 pilot plant with the particles is to further de-risk some of the key areas that we haven’t been able to test in an integrated fashion,” said Cliff Ho, Sandia lead investigator in solar thermal research. “The number one thing is integrating everything, including the heating of the particles in the receiver and storing the heat in an actual storage bin with at least 6 MWh of storage, and getting the heat out of the particles and then recirculating those particles up the tower again. So we’ll be demonstrating that in an actual operating environment with thousands of hours of testing. That’s the big goal.”

While literally dirt-cheap and just as durable as liquids, the particle-based technology has the same thermal energy storage advantage as molten salts over batteries. Like the earlier generation of liquid storage, particle-based CSP can store heat cost-effectively and discharge it over many decades of daily cycling. 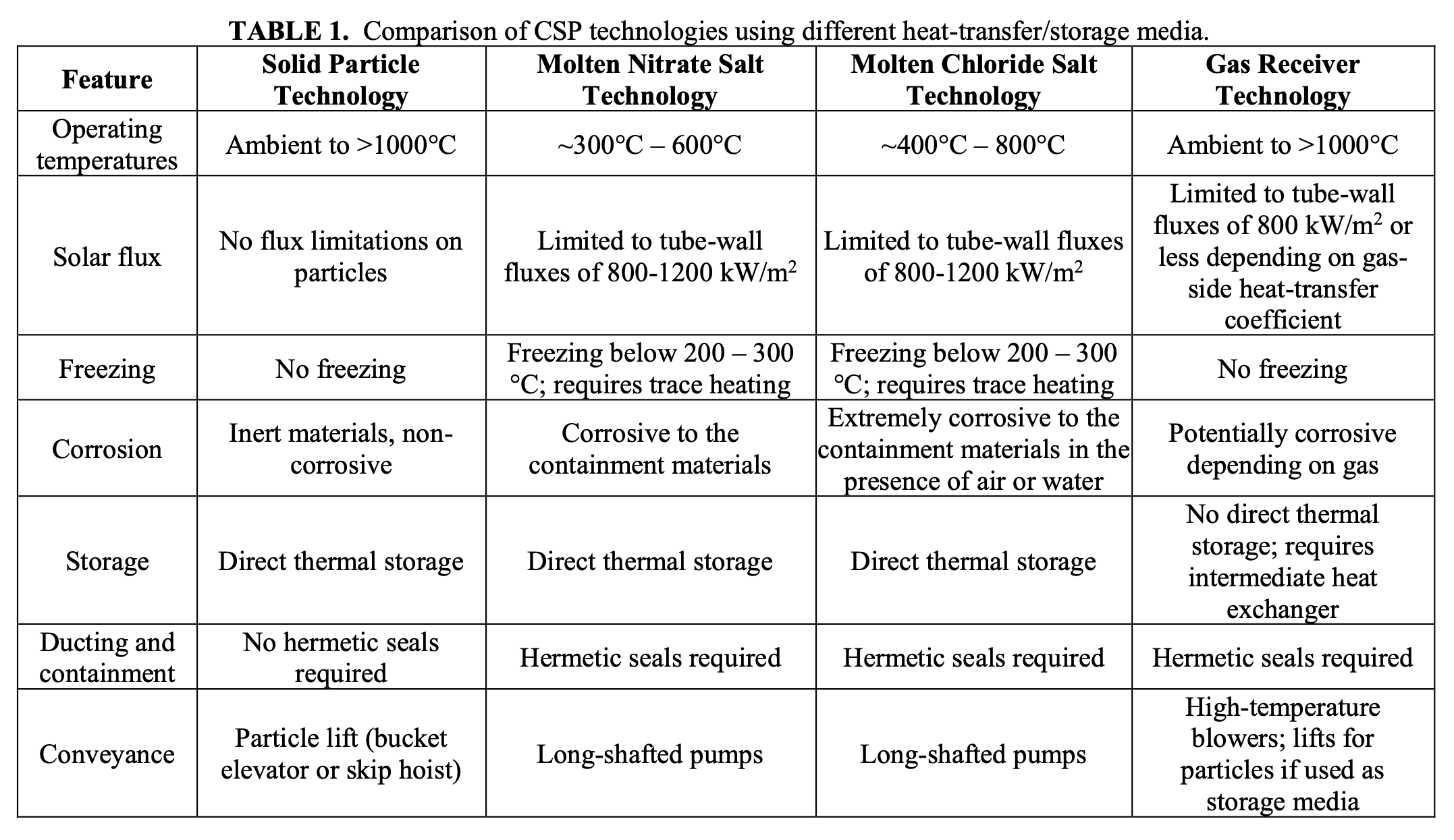 But the new technology promises many advantages over liquids due to its stability at much higher temperatures that will enable the long duration energy storage needs of a future grid of over 80% intermittent renewables.

Why particles are ideal for higher temperature long duration CSP

The particles the Sandia team proposed are bauxite sand, widely used commercially in the oil industry.

“You could store and hold the heat in those particles for days, if not weeks, if you needed to,” he said, but observed that likely most CSP plants would probably discharge energy every night to produce energy for revenue. Unlike molten salts, particles remain stable at high temperatures up to 1000°C, enabling them to be used in solar industrial processes that require high temperatures.

“CSP operating temperatures have been governed by the molten nitrate salts temperature limits. They become unstable as they decompose at about 600°C so typically they are only heated to 565°C,” he said.

Molten salts must also be prevented from “freezing” solid at 290°C, so they have a narrower operating range. In addition, the receivers in molten salt systems can burnout when too-concentrated sunlight creates hot spots in the metal tubing through which the liquid flows.

“But one of the great advantages of the particle receiver is that we aren’t using expensive metal tubular receivers,” Ho noted. “We’re literally dropping particles inside of a cavity made up of refractory insulating walls, that can be replaced cheaply if needed. Our receiver is a box with an opening through which the concentrated sunlight comes in. If we do overheat the back wall or the front aperture – which we’ve done in the test – it can be easily replaced.” (Paper: Receiver Design and On-Sun Testing for G3P3-USA)

Similarly, there is no need to insulate piping and tanks against freezing or corrosion and leaks. Storing these bauxite particles is straightforward, they simply fall into a pile in the tank like in a grain silo. An industrial grain hopper will be used to hoist them back up to the top of the tower for reheating in the receiver. They don’t need expensive trace-heating to prevent freezing overnight.

“They are going to work as soon as you open up in the morning, they’re still hot,” he said. “The beauty of particles is that they are self insulating, the thermal conductivity of particles is very low. We’re anticipating the temperature loss overnight can be limited to less than a percent or two. Maybe a few degrees drop in the bulk particle temperature in a large storage system.”

The team has tested and published papers describing how by controlling the instantaneous mass flow rate change in the receiver, they are able to make nearly instantaneous temperature changes, because the particles are being illuminated directly by the sunlight.

“Above the receiver we have a slide gate that controls the amount of particles flowing into the receiver from a particle feed hopper. .This slide gate is actuated so when the radiance is high—let’s say you have your full power from the heliostat field—you can have a large particle mass flow rate to absorb the amount of energy that increases the temperature to your design point, say 800°C,” he explained. 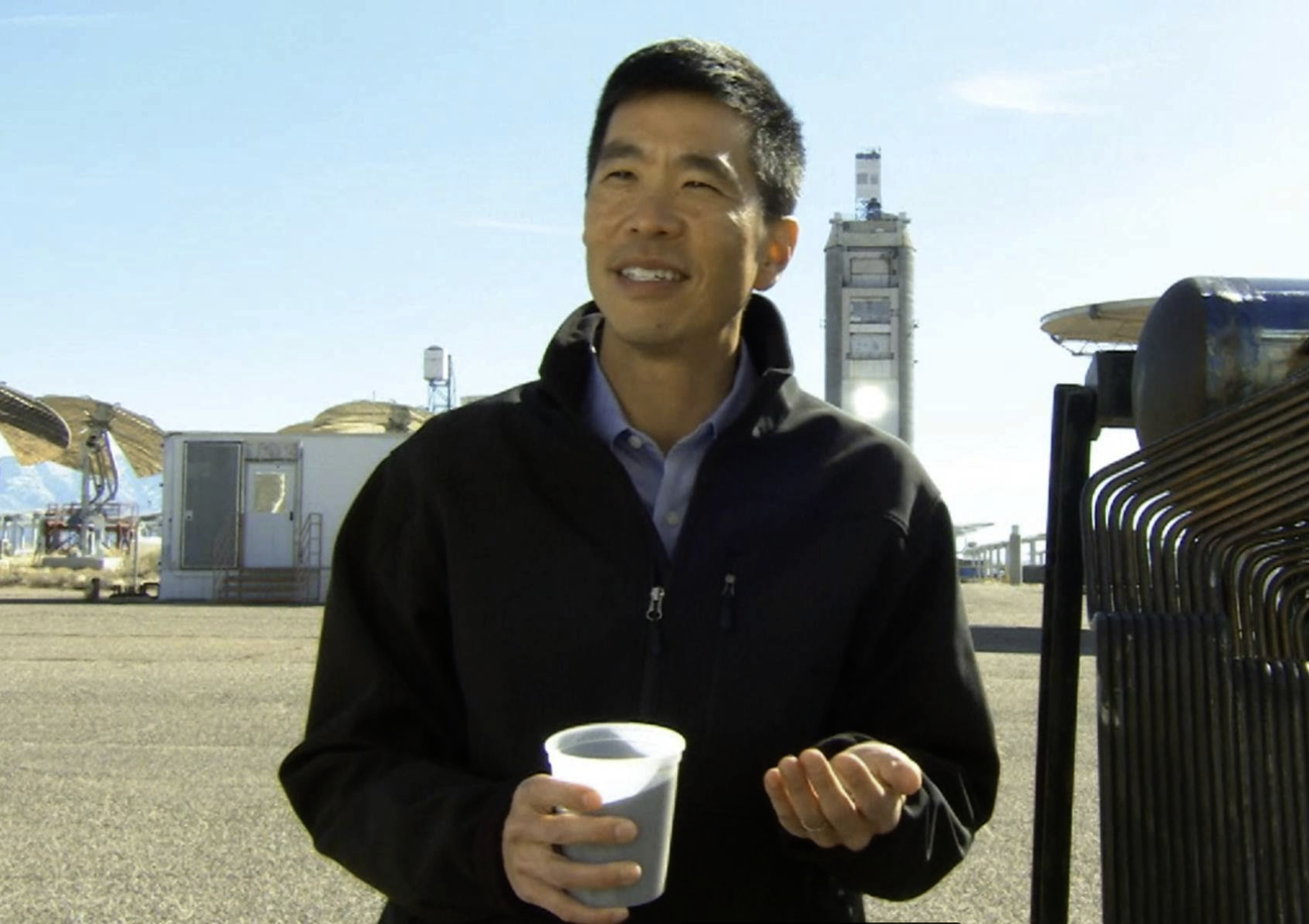 Ho takes the long view on commercialization. He believes that this new generation of CSP storing its thermal energy in particles for long duration energy dispatch will be commercially available within ten years, well before it will be needed to round out a grid of 80% intermittent renewables and short term batteries.

“Once we have the particle-based system de-risked and demonstrated, in the next five years or so, by that time, five to 10 years, it can be married with a commercial CO2 cycle as well,” Ho noted.

The DOE award is designed to pair the new CSP technology with an sCO2 power block being simultaneously developed by another team. In the sCO2 Brayton cycle, CO2 is run above its critical temperature of 31°C and pressure of 7.39 MPa (1,072 psi) inside a closed loop for a cheaper, simpler and more efficient high temperature power block, a large and costly portion of any thermal plant. The nuclear industry is also interested in this power cycle.

But even if this sCO2 cycle is not yet commercially available at that time, the Sandia team’s higher temperature CSP can still pair with a steam power block.

“Even though you’ve got the potential to get to 1000°C, you could still heat steam up to around 600°C using particles, just like in a conventional molten salt CSP plant.”