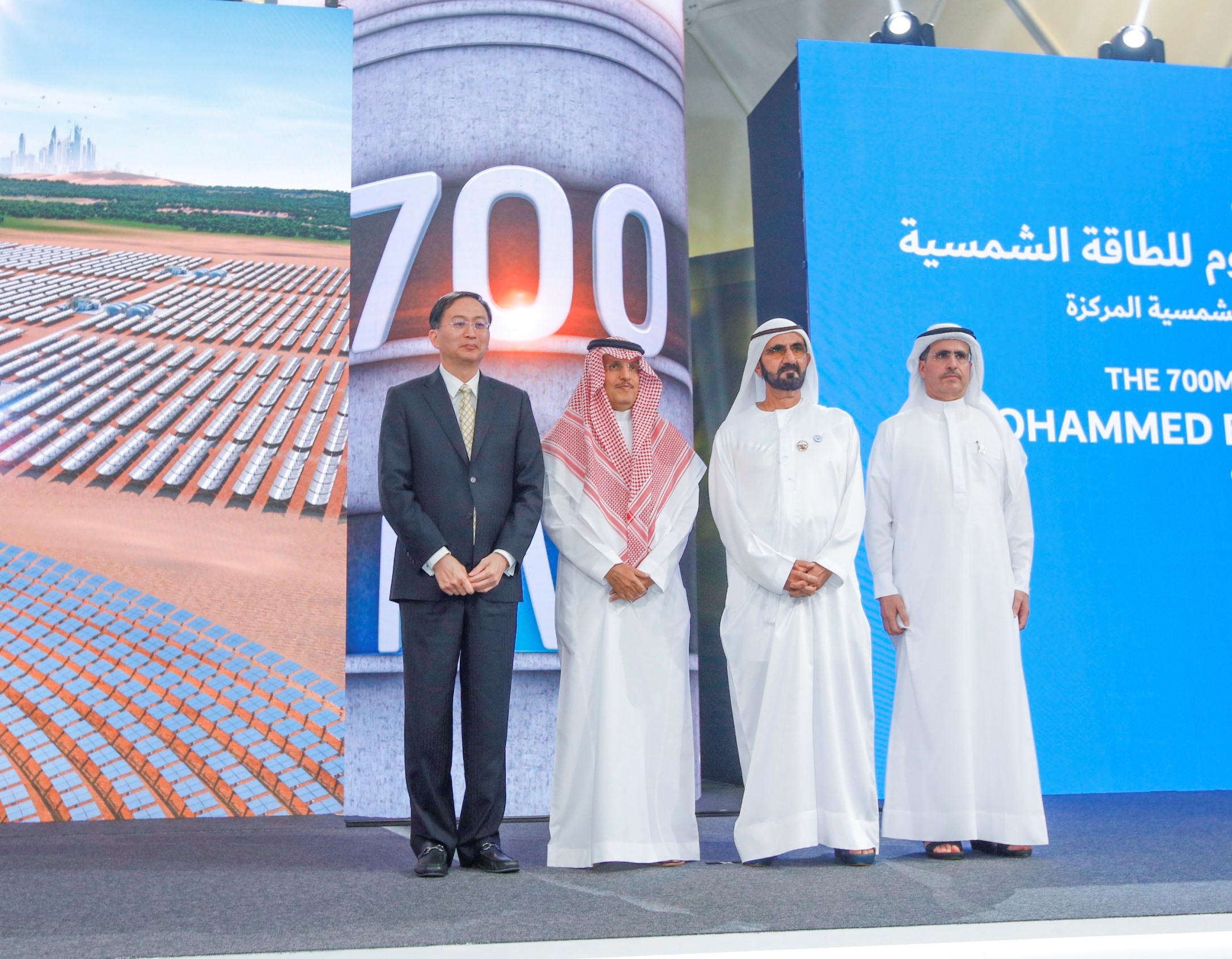 The Engineering, Procurement and Construction (EPC) agreement with Shanghai Electric Generation Group (SEGC) for the DEWA (Dubai Electricity and Water Authority) 700MW CSP project in Dubai was signed at a ceremony in China. As EPC, Shanghai Electric selected US-based Brightsource Energy to supply the heliostat field and tower for the 100MW power tower CSP portion of the project, in a joint partnership Shanghai Electric Brightsource (SEBS). The 600MW parabolic trough section will be supplied by the Spanish CSP firm Abengoa. The CSP portion includes 15 hours of thermal energy storage.

The project is the 4th phase of the Mohamed bin Rashid Solar Park, the largest thermo-solar power plant in the world. The agreement was signed in Shanghai in presence of representatives from the Chinese government, the embassies of the United Arab Emirates, and the Kingdom of Saudi Arabia as well as senior officials from DEWA, ACWA Power, the Silk Road Fund, Industrial and Commercial Bank of China (ICBC), Bank of China, Agricultural Bank of China and China Minsheng Bank.

80% Chinese finance is under way

The project is in the process of concluding the financing package announced by ACWA Power at the end of March. China’s ICBC (Industrial and Commercial Bank of China) is acting as the mandated lead arranger and targeting to approve USD 1.5 billion senior loan. This project is a flagship project for ICBC in supporting the three major Chinese power equipment suppliers, namely Shanghai Electric, Dongfang Electric and Harbin Electric, to ‘go abroad’ and break through the sophisticated and established power market. ICBC, Bank of China and Agricultural Bank of China will play an important role in the financing of the project, providing almost 80% of senior debt.

The EPC agreement pushes forward the development of the project, which represents a 14.2 Billion AED (USD 3.87 Billion) investment. The project, which comes with a record low tariff of just USD 7.3 cents per kilowatt hour (kW/h), will feature a combination of a tower and parabolic troughs, which will collect heat and store it in molten salt to supply electricity on demand during the day and through the night. The CSP tower to be built at the site will the world’s tallest CSP Tower, at 260m.

“I am pleased to be here in Shanghai to attend the signing of the Engineering, Procurement and Construction Agreement for the completion of the fourth phase of the Mohammed Bin Rashid Al Maktoum Solar Energy Complex,” said DEWA MD & CEO of DEWA, HE Saeed Mohammed Al Tayer. “This agreement builds on the strong ties between our two countries, which were formed by our common values ​​and the commercial and economic interests that unite us.”

“By signing this agreement, we have taken a significant step towards starting the engineering and construction works. We are committed to supporting Dubai’s Clean Energy Strategy through this project, which extends our portfolio in the energy sector in Dubai,” said ACWA Power Chairman, Mohammad Abunayyan.

ACWA Power President & CEO, Paddy Padmanathan added: “Thanks to the Dubai Electricity and Water Authority, this project proves the success and effectiveness of implementing projects based on a public-private partnership model. We are confident that signing the EPC agreement with Shanghai Electric will secure the delivery of required work at the highest standards.”

Chairman of SEGC, Mr. Zheng Jianhua, said: “This project presents an opportunity for China, UAE and KSA to cooperate, promote and benefit in energy and infrastructure development based on each parties’ advantage in equipment manufacturing, engineering, construction & infrastructure, financing, project development and project management.”

The fourth phase of the Mohammed Bin Rashid Solar Park is set to save 2.4 million tons of CO2 and half a million tons of natural gas per year, eliminating the need to use foreign currency to import this gas by substituting it with clean and renewable energy.

ACWA Power is a developer, investor and operator of a portfolio of power generation and desalinated water production plants currently with presence in 11 countries including in the Middle East and North Africa, Southern Africa and South East Asia regions. ACWA Power’s portfolio, with an investment value in excess of USD 30 billion, can generate 22+ GW of power and produce 2.5 million m 3 /day of desalinated water to be mostly delivered on a bulk basis to state utilities and industrial majors on long term off-take contracts under Public-Private-Partnership, Concession and Utility Services Outsourcing models.

ACWA Power, registered and head-quartered in the Kingdom of Saudi Arabia, is owned by seven Saudi conglomerates, Sanabil Direct Investment Company (owned by the Public Investment Fund of Saudi Arabia), the Saudi Public Pensions Agency and the International Finance Corporation (a member of the World Bank Group).

ACWA Power pursues a mission to reliably deliver electricity and desalinated water at low cost, thereby contributing to the social and economic development of the communities and countries it invests in and serves. ACWA Power strives to achieve success by adhering to the values of Safety, People and Performance in operating its business.

Concentrated solar power systems generate solar power by using mirrors or lenses to focus a large area of sunlight onto a small area – unlike PV, which generates power through the photovoltaic effect. Electricity is generated when the concentrated light is converted to heat, which drives a steam turbine connected to an electrical power generator.