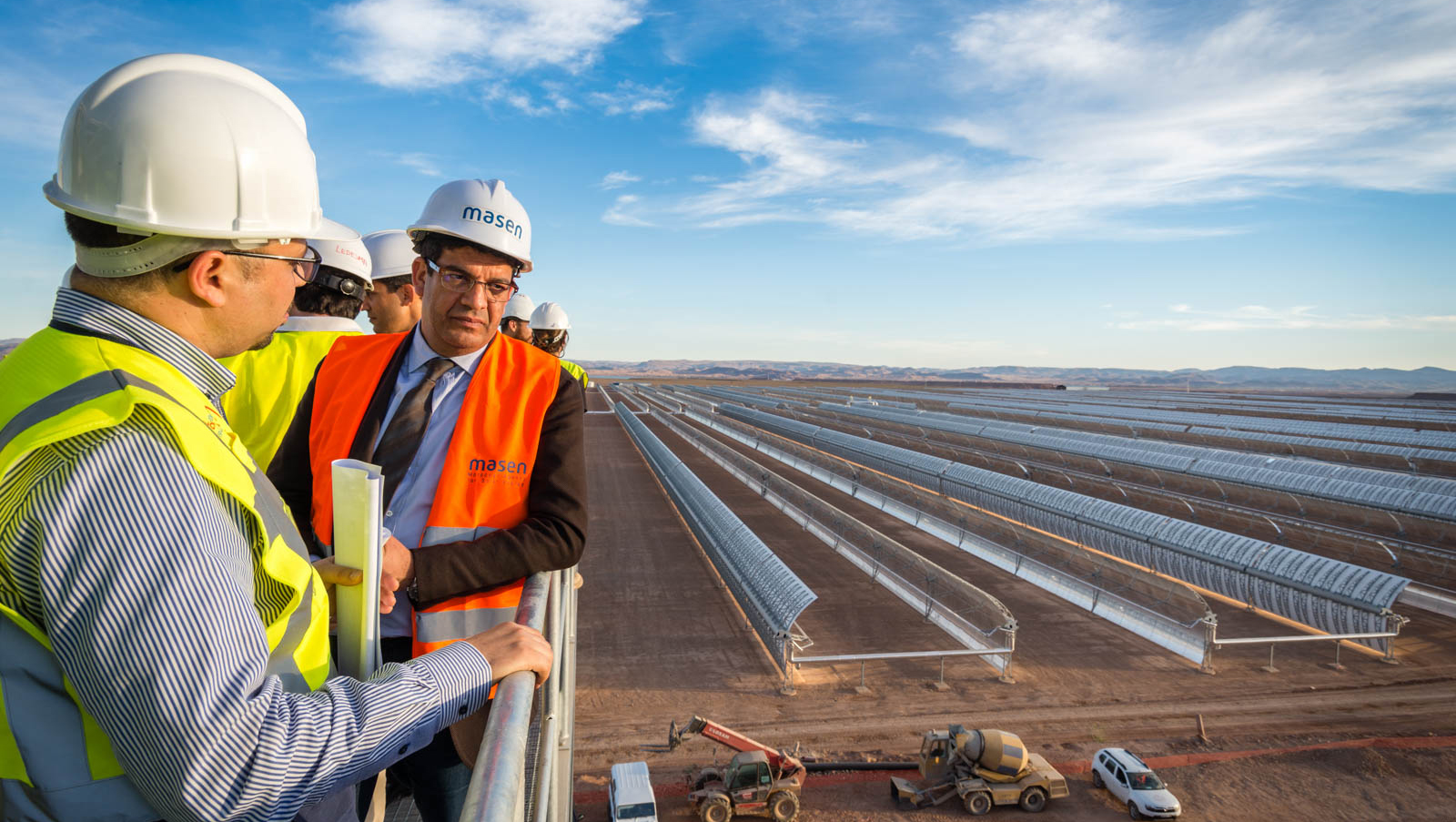 At the 2015 Paris Agreement, King Mohammed VI announced Morocco’s policy to get 52% of its electric installed capacity from renewables by 2030. MASEN is in charge of getting 2 gigawatts (GW) of solar installed between PV and  CSP along with about 2 GW of wind power to achieve this ambitious objective for its population of 35 million. With the completion of NOOR III, Morocco has reached it’s first half-gigawatt of CSP (NOOR I, II and III).

SolarPACES reporter Susan Kraemer spoke with Hicham Bouzekri, who is Director of R&D and Industrial Integration at MASEN to find out why Morocco’s climate plan for renewable development works so well.

SK: Not only are Morocco’s renewable energy plans really ambitious, but they are being achieved. There are no roadblocks. How do you manage to do that?

In Morocco the renewable energy capacity coming online is not competing or trying to replace existing capacity but is needed because Morocco is a net importer of electricity from our neighboring countries. So as renewable energy comes online, we see a decrease in energy from abroad. All the solar projects that have been developed and are being developed supply a particular demand.

So the technology choice Morocco has made is in line with market needs. Morocco’s economy is in growth. Electricity demand grows by 5 to 7% every year so there is a window of opportunity for renewable energy to meet that excess demand. This situation is pretty unique to Morocco. So the market dynamics allows the development strategy to succeed. The grid owner in Morocco has specified a particular need for grid energy to supply the demand after the sunset.

SK: So did Morocco choose CSP for its energy storage; because with all the PV you are adding for days, you will need night solar, and CSP can store solar for night?

HB: You are familiar with the duck curve in California, where so much electricity is PV peaking in midday, whereas the evening peak has no renewable generation to match it. Morocco opted for CSP technology as it has the most competitive storage option of renewable energy technology for the time being.

As technology becomes more competitive, we could see batteries entering into the market; who knows what the next two or three years of battery prices will be. But currently batteries are not cheaper.

SK: But what exactly is Morocco doing differently so that renewable development is actually getting built according to plan? In CSP alone, just with Noor, MASEN has nearly half the CSP the DOE got through during the Obama years; 1.3 GW. ARENA hasn’t capitalized on Australia’s CSP potential. California saw nearly all the CSP the BLM approved drop out. What’s your secret?

HB: The examples that you have given as equivalent of MASEN in other countries; they are not complete, in that the DOE or BLM in the US and ARENA in Australia are regulating agencies. MASEN is an operating entity in Morocco that takes care of everything. Having a “one-stop shop” allows you to lift many of these roadblocks that have appeared in other countries.

The electricity company commits to pay for that electricity even if they don’t take it. Morocco benefits from increasing demand in electricity, so we still have a margin by which we can guarantee that the electricity will be needed.

There is always a risk in new energy development, that has to be shouldered by all stakeholders. MASEN has set a goal to make green electricity as competitive as possible. You can only do that by lowering the risk perception from stakeholders.

And lastly, MASEN is a shareholder in each project, which guarantees to all stakeholders that the project will get built and last for all 20 years that the funding is required for.

SK: That is all very different! So MASEN’s “one stop shop” would be an effective climate policy model for other countries to follow.

HB: Yes. MASEN has been quite actually pleased to see a lot of interest from other African countries. It is always easy when you have a rich country that develops renewables. But that doesn’t create as much of a call to action as when African countries are succeeding, like we are.

We just put out a map of the other African countries that we have signed a pending memorandum of agreement with, and we are helping shape their renewable energy agenda.

Some of the partnerships have gone faster into actual projects that we are actually helping put together. MASEN’s success in renewable energy is creating inspiration in other African countries and this is an important role.

SK: If these other African countries could duplicate MASEN’s financial structuring, would they also be able to access these international sources of funding?

HB: That’s exactly the idea: to export our model of how you can mobilize international Green funds, and structure a project where it is a viable, sustainable model for developing renewable projects in your country. 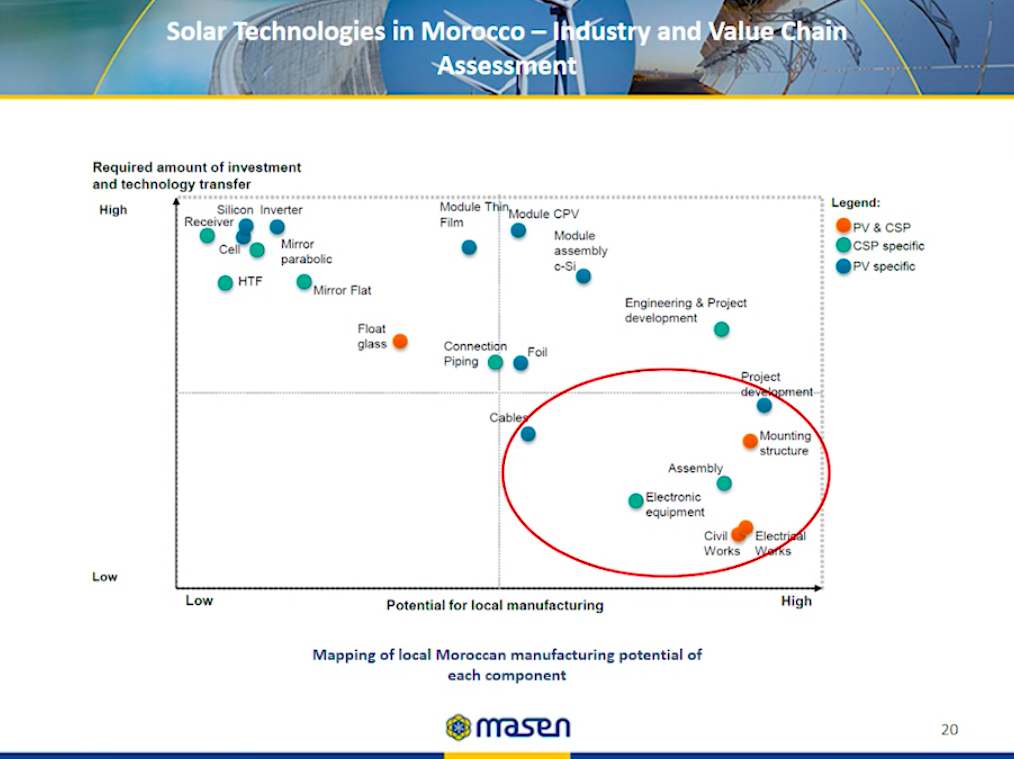 SK: What about the economic benefits?

By taking this holistic approach we believe that renewable energy is an opportunity for development in Morocco and to transfer too, as we collaborate with many African countries who are also looking into renewable energy as a means of job creation and to develop local industries.

SK:Are you interested in exporting power, too? Grid balancing renewables over a wider area?

So we need a very solid grid connection that allows you to transport this electricity cheaply, producing renewable energy where it is most competitive: putting it in places where you have the highest resource availability. Ultimately renewable energy has to compete on the existing markets. So competitiveness is the key to opening new markets.

The most promising market is to our South; sending renewable energy to where it’s really needed. The grid coverage in southern countries is not great. So Morocco is actually investing in bringing very high voltage grid connections to Mauritania and from there to the Western African nations. This is an ongoing project, not yet connected up. But we do foresee that happening in the coming few years.