Home >Latest In:>CSP News & Analysis>CSP to be Essential by 2050 …for Germany? 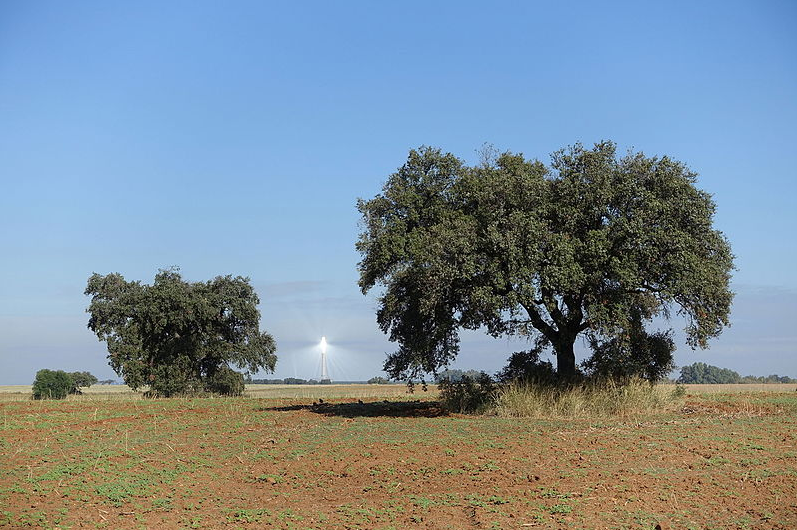 German plans for an almost entirely emissions-free grid by 2050 will include solar energy imports from CSP in Morocco and Spain.

Given Germany’s lack of desert sun, it might seem improbable that thermal solar would be a key component of its low-carbon grid planning under its Energiewende (energy transition). But several papers published in 2016 found that concentrated solar power (CSP) will be an essential component.

Germany is looking at the most cost-effective way to supply electricity on a grid that by 2050 is to be almost completely emissions-free. In 2011, Germany had set a very ambitious clean energy policy. Under this plan, the grid would go from the 30 percent clean grid of today to 90 percent emissions-free by 2050.

To perform the analysis, a new computational tool was developed by Aachen University in response to a request from the German Academy of Sciences’s project ESYS (Energiesysteme der Zukunft: Future Energy Systems) to determine which flexibility options would be best suited to cover residual load in a system with a very ambitious GHG emission reduction.

The result: Though CSP requires the direct normal irradiance (DNI) found in abundance in the world’s sunny high deserts, even importing generation from high-DNI deserts in Spain and Morocco, CSP with thermal energy storage could become an economically competitive option, due to its ability with storage to fill the gaps created by intermittent generation.Imports of thermal solar from Spain and Morocco would entail building HVDC (high Voltage Direct Current) lines, because direct current is the most effective way to transport large amounts of electricity long-distance.

So, included in the cost calculation is the cost of this imported dispatchable solar, plus the cost of building new transmission lines from these sunny regions to Germany.

The Aachen University computation was not focused on CSP in particular, but on future energy systems overall. In a future grid with a high percentage of intermittent, fluctuating generation, like wind and PV, controllable and dispatchable generation will have to play a much larger role in filling the gaps in the system, according to Research Associate Philipp Stöcker at Electrochemical Energy Conversion and Storage Systems – Institute for Power Electronics and Electrical Drives at RWTH Aachen University.

Stöcker’s focus is the design of computation tools to optimize and analyze energy systems, and he has co-authored several papers, including: Evaluating the value of concentrated solar power in electricity systems with fluctuating energy sources.

Stöcker explained: “The key idea in our tool is that you can’t adjust the load that much. You have the fluctuating generation, not controllable, like PV and wind. You’ve got the remaining load – and then you’ve got controllable generation or storage system that can balance this residual load.”

Batteries are uncompetitive for utility-scale storage

The Aachen study found that battery storage is unlikely to become competitive enough at grid scale to store wind or PV. By contrast, CSP with thermal energy storage (CSP-TES) already incorporates its own storage at much lower cost, making it the controllable form of solar.

The storage is possible because of the way CSP works differently than PV. CSP captures the heat of the sun using mirrors and can then store its heat in giant tanks of molten salts for use at any time, to supply the heat to run a traditional power block. Because this energy can be dispatched at any time it is needed; this form of solar with thermal energy storage directly competes with fossil fuels.

Stöcker said that the tool developed at Aachen is the first of its kind to input state-of-art CSP technology in the most-likely future state of deployment; which includes thermal energy storage.

“The key difference to our tool is that we appropriately consider storage systems. For future analysis, storage is an important part,” he said.

Pointing out that while initially, CSP was also a fluctuating renewable that lost out to cheaper PV and wind; Stöcker added that today CSP has the almost unique ability to provide firm capacity or controllable capacity with storage at an attractive cost. “The interesting question now was for us to see if CSP is competitive there – when changed in its situation for the system, from fluctuating renewable to controllable generation.”

Among the Aachen findings were that if PV and wind comprised over 70 percent of the grid, then CSP to supply the remaining load would become uncompetitive. Here’s why:

A crucial role for CSP-TES in a low carbon grid

CSP’s dispatchability turns out to be both good news and bad news, according to Stöcker. Because of its dispatchability; the model factored in CSP with thermal storage as equivalent to fossil-fueled non-fluctuating generation resources like coal or gas. But coal and natural gas are suffering reductions in capacity factor as more fuel-free generation gets added to the merit order effect.

In grid systems with merit order dispatch, the cheapest options to run go on the grid first, so it tends to favor high renewable penetration, with free fuel from sun or wind. With their utilization reduced, and thus their capacity factor lowered, coal and natural gas plants become more expensive to run, as Bloomberg reported in 2015. By 2016, one of Germany’s largest utilities, RWE lost 5.8 billion as a result of low electricity prices.

Of the free fuel options, PV; with no moving parts and fully automated operation, is the lowest-cost to run. Next is wind. But like coal or gas power plants – and hydro and geothermal – CSP runs a power block.

“In a CSP plant, you’ve got all the mechanics of the mirrors, a complicated hydraulic system, and effects like aging from heat tension on the receiver,” Stöcker explained. “All in all, this should drive an operator to go out of the market before PV and Wind would.”

As a result, the Aachen tool determined that if there would be over 70 percent intermittent generation like PV and wind on the grid, the utilization of CSP would be too low to be competitively priced.

“One of the important things we found was that if you increase the fluctuating renewables more and more, they slowly consume up the base loads or cut them in pieces; so they lower the full load hours of all the other technologies,” he explained.

So, the thermal solar with its low-cost thermal energy storage could supply more than 30 percent of a low-emissions grid at a competitive cost. But if utilized less than 30 percent, this storable form of solar might become too expensive; raising overall grid costs.