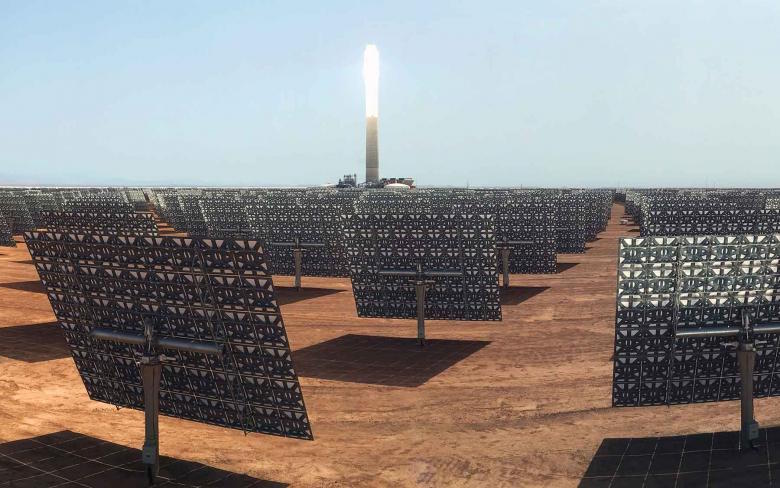 SENER is about to start the final tests at Noor Ouarzazate III, after completing the first synchronization of the 150 MW Concentrated Solar Power (CSP) plant to the Moroccan grid. With these milestones, SENER starts the last phase before the plant’s commercial operation and final delivery to the client.

This plant is the second unit designed and built by SENER using its own central receiver tower and molten salt heat storage technology, and one of the first ones in the world to apply this configuration on a commercial scale. The high performance of this technology – the molten salt reaches higher temperatures than other CSP technologies, which maximizes thermodynamic efficiency – allows to manage the solar energy in absence of solar radiation and respond to the grid’s demand. This is a unique characteristic of CSP that radically changes the role of renewable sources in the global power supply.

In the Noor Ouarzazate III thermal power plant, SENER has been responsible for the plant’s conceptual and basic engineering, detail engineering and supplying equipment for the thermal storage system, engineering and construction of the solar field and the molten salt receiver, as well as the commissioning of the entire plant, which is expected to be delivered to the client by the end of 2018.

Noor Ouarzazate III is composed of a solar field of 7,400 heliostats HE54 (designed and patented by SENER), that point the Sun radiation towards a receiver located on the top of the tower, at a height of 250 m, thanks to the company’s highly accurate tracking system known as ‘solar tracker’. SENER has also been responsible for the 600+ MW high-powered receiver design and construction, in collaboration with Moroccan companies. Noor Ouarzazate III is also equipped with a molten salt storage system that allows the plant to keep producing electricity 7.5 hours without solar radiation and guarantees the dispatchability of the power plant. Along with all these key components, SENER has fully developed the integrated control system of the receiver and solar field.

Anas Raisuni, SENER Regional Managing Director in Morocco, commented: “Noor Ouarzate III synchronization is the last milestone before delivering the plant to ACWA and MASEN. With its visionary investment in solar power, MASEN has secured a clean, sustainable and manageable power supply for Morocco, while developing the national industry in a cutting-edge sector as CSP. We are very proud to have worked for these two entities (ACWA and MASEN), designing and building one of the most advanced solar thermal power plants of the world. Once operational, it will mark a turning point in the CSP sector worldwide and will consolidate SENER as a leading engineering company and the most innovative one as a technology supplier for this sector.”