Solar thermal energy exceeded 5 TWh of electricity generation in 2019 in Spain, adding 5,166 GWh, representing an increase of 16.8% over 2018 and 3.8% compared to the average of the last 5 years. Its contribution to the electrical system was 2.1% on average, with timely contributions of 10%. Spain currently has 50 solar thermal power plants in operation.

“The thermosolar has strengthened during the past year its positioning as an essential technology to face the energy transition, thanks to the thermal storage that will be provided by all future power plants, which will be able to begin shipping from sunset replacing part of the photovoltaic production and reducing the need for fossil support during the night “, they affirm from the association of the sector in a statement.

Protermosolar highlights that the current solar thermal installations, some of them with more than a decade of operation, continue to operate without showing signs of degradation and incorporate operating experiences that make them more efficient. 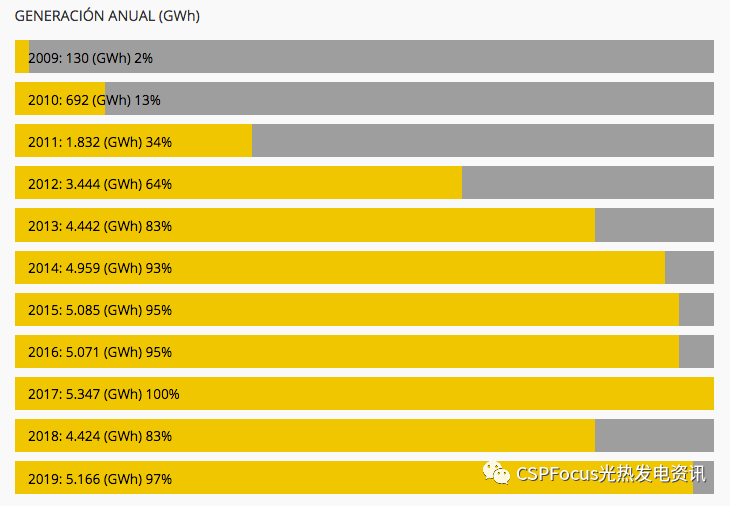 The availability of sites and capacity of its companies means that “Spain has, unlike other European countries, the possibility of deploying this renewable, manageable and storage technology, which will facilitate the achievement of the renewable and decarbonization objective envisaged in the PNIEC to 2030 “, the association continues. Something that would be reformed if “storage systems are implemented in those plants that currently do not have it or hybridize some plants with biomass.

Take advantage of the sun even better

Protermosolar also notes that “incorporating photovoltaic self-consumption into current plants would increase its synchronous and manageable production. Regarding the future fleet, its complementary photovoltaic office would contribute to the integration of renewable energy into the system, optimizing transmission infrastructure , existing and future, and contributing to the stability of the network “.

The employer explains that the new solar thermal power plants, provided with large storage systems and dispatching electricity from sunset, would alleviate the ramps that would cause the daily fall of photovoltaic production in the afternoon and would largely prevent emissions that otherwise, they would be associated with the combustion of gas in the combined cycles.

In addition, the storage tanks of the solar thermal power plants could be used to capture the discharges of wind and photovoltaic technologies, avoiding investments exceeding 20,000 million euros in battery systems or new pumping facilities. The solar thermal power plants could even act as a strategic reserve available to the system operator for times of maximum demand, since they can maintain an important part of their capacity for days, weeks or months, when required with absolute availability.

Spain currently has 50 solar thermal power plants in operation. This technology employs 5,200 people and contributes to GDP with about 1,500 million euros (data from 2018).