Besides continuous technical improvements of the plants it is of vital importance for a broad market introduction to predict the electricity outcome and thus the financial revenues in high quality. Both, the physical outcome of the plant and the cost/revenue balance are key to project finance. The SolarPACES Guideline for Bankable STE Yield Assessment provides guidance to the stakeholders involved in yield prediction of STE systems. The guideline addresses the project development process which is roughly described by the three phases

as illustrated in figure 1. The consecutive activities related to guarantee models and acceptance testing are not the focus of this document although strong links exist between the project development and the contractual phase. 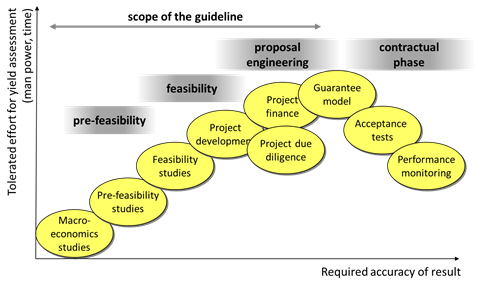 In December 2016, the first version of the guideline is released which consists of the main document, entitled “Guideline”, and an appendix that compiles an extensive list of distinct definitions required for STE yield analysis. Most chapters of the guideline are designed to be technology-independent. In the first version of the SolarPACES Guideline, the parabolic trough with oil and molten salt tower technologies are presented.

Apart from these SolarPACES reviewed documents a number of additional documents have been developed within the CSPBankability project. The material is published on the DLR website and will serve as draft for future extensions of the guideline. Interested users are invited to download and use also these documents. http://www.dlr.de/sf/en/desktopdefault.aspx/tabid-11126/19467_read-48251/

As a basis for tool development, tool comparison, and comparative studies a large number of meteorological data sets have been compiled by German company Suntrace. These data sets are free to use for scientific purposes. The respective files contain a text to be used in the Acknowledgements when using these data. For details, please refer to the documentation which is available for download.

An annual data set is available for all variations shown in the following table resulting in 4x4x4x2=128 individual data sets.

The four zip files with the meteo data sets are provided for download under the link:

A comprehensive documentation for the dataset is available : SolarPACES_Guideline_for_Bankable_STE_Yield_Assessment_-_Documentation_of_Meteo_Files

Draft material for an extension of the guideline is already available by the end of December 2016. However, this material needs to undergo a comprehensive review process in order to ensure high quality documents. It is foreseen to form a group of experienced experts from various R&D institutes world-wide that organizes the review process. The next steps in this working group will be:

The following activities are foreseen to promote the usage of the guideline throughout the STE community:

Some background on the guideline development process

In 2009, a group of SolarPACES experts started a mission under the headline “guiSmo-a guideline for standardized yield analysis of solar thermal power plants”. Several steps have been carried out in various workshops and meetings resulting in a compilation of relevant physical effects, a general modeling framework, a first compilation of important terminology, and handbook chapter structure. Due to funding limitations, the pace of developing the guideline slowed down dramatically. However, in 2014, national funding was obtained from the German government in order to relaunch the activities with the mission to work out a guideline proposal for discussion within the international expert group of SolarPACES. The first version of this guideline has passed an international review process within the SolarPACES Task I expert community. The guideline document and the Appendix T “Terminology” have been published in December 2016 as SolarPACES reports.

The guideline activity has been funded by SolarPACES and the German Federal Ministry for Economic Affairs and Energy as well as many contributions from experts world-wide. The main authors and contributors to the documents are mentioned in the documents.