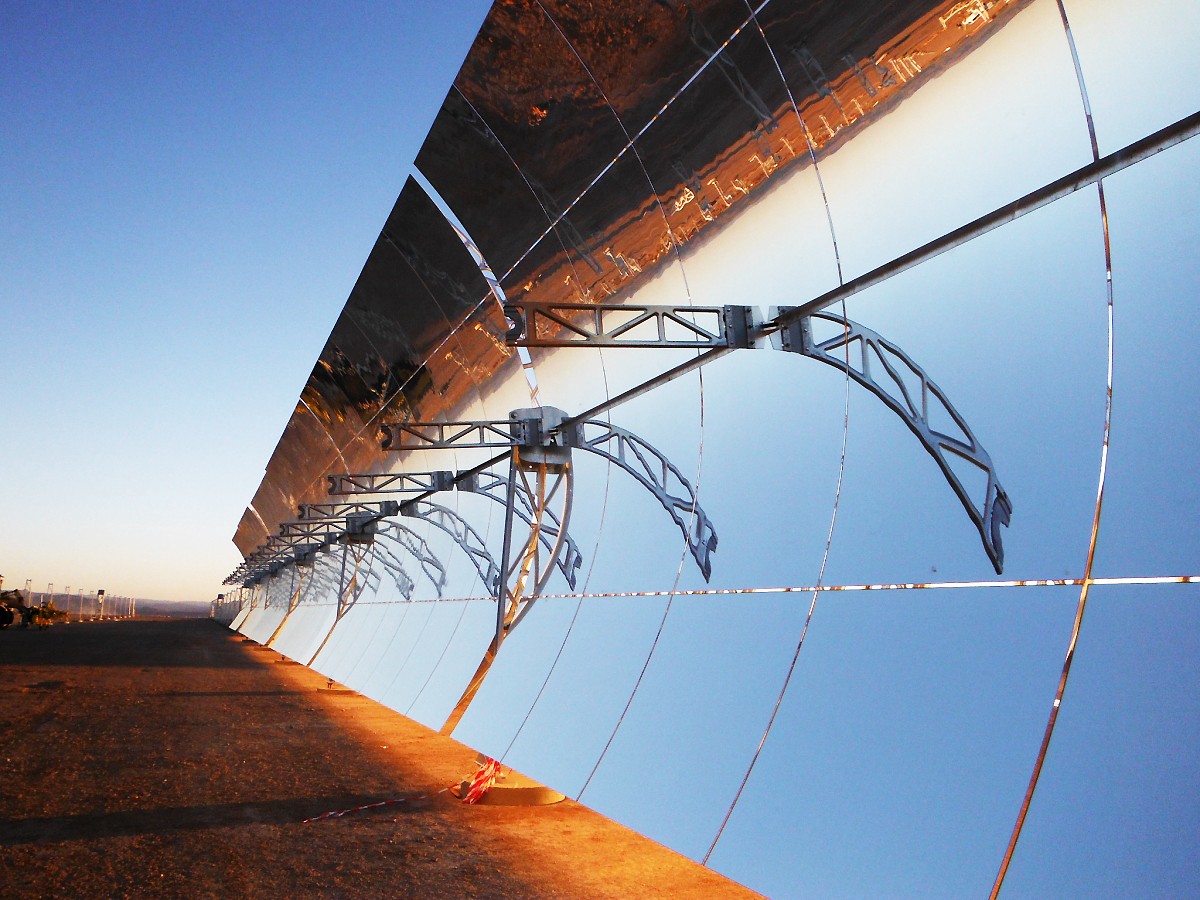 A solar field of parabolic troughs like these would provide the solar heat required for the chemical process described in a new paper from ORNL: Direct air capture of CO2 via aqueous-phase absorption and crystalline-phase release using concentrated solar power

Concentrated Solar Power (CSP) will play a key role in a decarbonized economy because it can produce heat without adding any carbon emissions.

Though for centuries we’ve produced heat for industrial uses by burning a fossil fuel like coal, or more recently oil and gas, in the future we could substitute heat for many of these industries simply through reflected and concentrated sunlight.

The IEA says that by the end of the century, CO2 will need to be removed to keep temperature rise to under 2 degrees. So, along with switching to renewable energy, we will need to remove carbon dioxide from the air.

Heat is required to perform the thermochemistry involved in CO2 air capture. As the heat-based form of solar energy, CSP is well positioned to play a key role in CO2 removal, to begin to rebalance the earths atmospheric chemistry.

Researchers at the US Department of Energy’s Oak Ridge National Laboratory (ORNL) find CO2 could be captured from air or flue gas and removed using a novel amino acid chemistry. Then, using heat at 120°C from concentrated solar thermal trough reflectors, CO2 is crystallized as carbonate with a guanidine compound, from which it can be released to be sent for geologic storage .

Air removal of CO2 is only just moving beyond pilot-scale.   One of just a handful of firms now pioneering it commercially is Climeworks. According to their communications manager, Louise Charles, in their direct air capture plant in Hinwil, their CO2 air capture machines are built on top of a waste incineration plant and use its even lower temperature waste heat at 80-100°C.

Another start-up, Carbon Engineering, uses heat at a much higher temperature, at 800°C, from burning natural gas. (To account for the additional carbon emissions, extra CO2 is removed.)

How the research came about

The research team’s discovery came by accident during their earlier work in removing environmental contaminants like phosphate from water.

They had been using a synthesized guanidine compound, which binds strongly to the contaminants and forms insoluble crystals that are easily removed from water.

They were surprised to notice that the guanidine was also capturing carbon dioxide just from the air in the lab and binding it in the crystals also, as carbonate, which is formed when carbon dioxide in air reacts with water.

Applying what they discovered to air capture of CO2 was a trial and error process.

“The first attempt took like days basically, to get the crystals,” explained lead author Radu Custelcean.

“The problem was that the chemistry was limited by the relatively small contact area between air and the liquid. And that’s how we came up with the humidifier solution and the amino acids; they sped it up. Before, we could capture only about 1 mg of CO2 in one week, and now we can capture 100,000 mg in 24 hrs.”

Custelcean and his ORNL team have now published the details of their new process in their paper at Nature Energy: Direct air capture of CO2 via aqueous-phase absorption and crystalline-phase release using concentrated solar power

They dissolve commercially available amino acids in water inside a humidifier tank, thereby increasing the contact area between air and the amino acid solution. This increases the rate of CO2 absorption. The CO2 is subsequently crystallized with the guanidine compound.

Heating the crystals then causes the carbon dioxide to separate out as a gas and regenerates the guanidine, which can be recycled multiple times.

As a chemist with 100 papers published to date, Custelcean is focused on the chemistry of the process. So to provide the solar heat for the lab-scale experiment – the ORNL team simply bought an off-the-shelf solar oven (GoSun) essentially a miniature trough-type CSP heliostat.

If it were to be operated at scale, there would be no need for a full CSP power block – like for generating electricity – because their CO2 removal process just uses low temperature direct heat.

(For electricity production CSP needs to heat to around 400°C for trough (see How CSP works; trough, tower, fresnel or dish) or 565°C for tower CSP, and to make solar fuels in a solar reactor such as hydrogen or net zero solar hydrocarbons, between 800° to 1500°C – but for this process, they only need 120°C.)

So air capture of CO2 using this method would require only a solar field of parabolic troughs to focus and concentrate sunlight for a steam-making-only industrial technology, similar to the solar-heat-for-steam-only process that Glasspoint uses to extract oil from oilfields or the district heating technology Aalborg uses.

How much energy to remove each ton of CO2?

Even though the temperature of the process is low, the energy required can be high.

“It is substantial; in the range of I think 5000-6000 kJ per kilogram of CO2. That’s why we think it’s important to use renewable energy, so that is what prompted us to consider concentrated solar power,” said Custelcean.

“We can measure the energy required on a lab-scale process. The pilot scale plant would be needed to assess the efficiency of the process under real-world conditions, and come up with a realistic cost analysis.”

Most of the energy is for the regeneration step, which uses thermal energy.

“There’s a much smaller electricity requirement; maybe 10% or in that range. you need electricity to operate the fans and the pumps. For example in the absorption stage you have to blow the air from the humidifier over the contactor. And then there is some other steps in the process where you have to use energy,” he added.

PV could be the cheapest option for this, Custelcean surmises, but hastened to add that the mechanical design is outside his expertize. (Such specialization is typical of advanced research that enables new technologies.)

Because the process is at a low temperature, an excellent solar resource is not necessary. Despite Scandinavia’s very poor Direct Normal Insolation (DNI), Aalborg in Denmark, for example, is able to operate low temperature CSP for district heating.

The air capture process would work better in humid regions with water access like the US Southeast, for example, than in arid regions with better DNI where CSP is more typically sited.

“You just need any source of water, not potable necessarily,” said Custelcean.