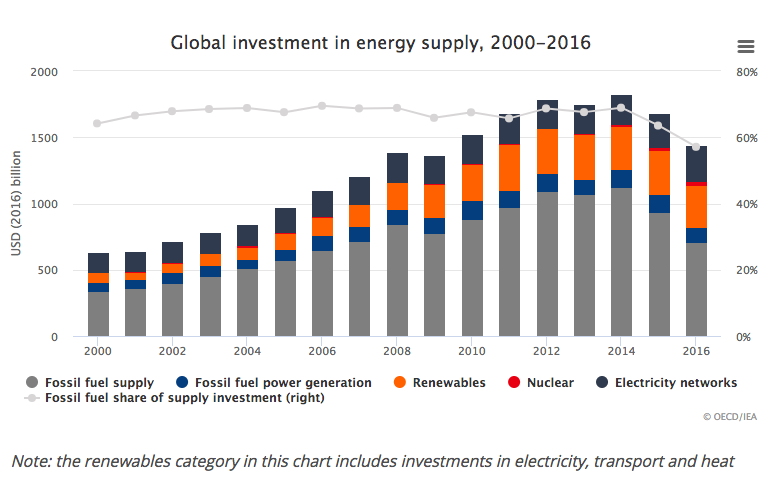 Some key points from the IEA’s World Energy Investment 2017:

For the first time ever, the electricity sector edged ahead of the oil and gas sector in 2016 to become the largest recipient of energy investment. However oil and gas still represent two-fifths of global energy supply investment, despite a fall of 38% in capital spending in that sector between 2014 and 2016.

Investment in coal-fired plants fell sharply, with nearly 20 gigawatts (GW) less commissioned, reflecting concerns about local air pollution and the emergence of overcapacity in some markets, notably China, though investment remained elevated in India. The investment decisions taken in 2016, totalling a mere 40 GW globally, signal a more dramatic slowdown ahead for coal power investment once the current wave of construction comes to an end.

Investment in new renewables-based power capacity, at $297 billion, remained the largest area of electricity spending, despite falling back by 3%. Renewables investment was 3% lower than five years ago, but capacity additions were 50% higher and expected output from this capacity about 35% higher, thanks to declines in unit costs and technology improvements in solar PV and wind.

Nearly 40% of utility-scale renewable investment took place in markets where prices for power purchase were set by auctions, contracts with corporate buyers and other competitive mechanisms, up from under 30% in 2011. In wholesale markets, funding new thermal generation increasingly depends on capacity payments or other revenues beyond wholesale markets.

Because of the drop in fossil fuel spending, total energy investment worldwide in 2016 was just over $1.7 trillion, accounting for 2.2% of global GDP. Investment was down by 12% compared to IEA’s revised 2015 energy investment estimate of $1.9 trillion.

A video summarizing the new IEA report provides a quick overview of a dramatic drop in fossil fuel investment which accounted for virtually all of the global spending decrease since 2014.