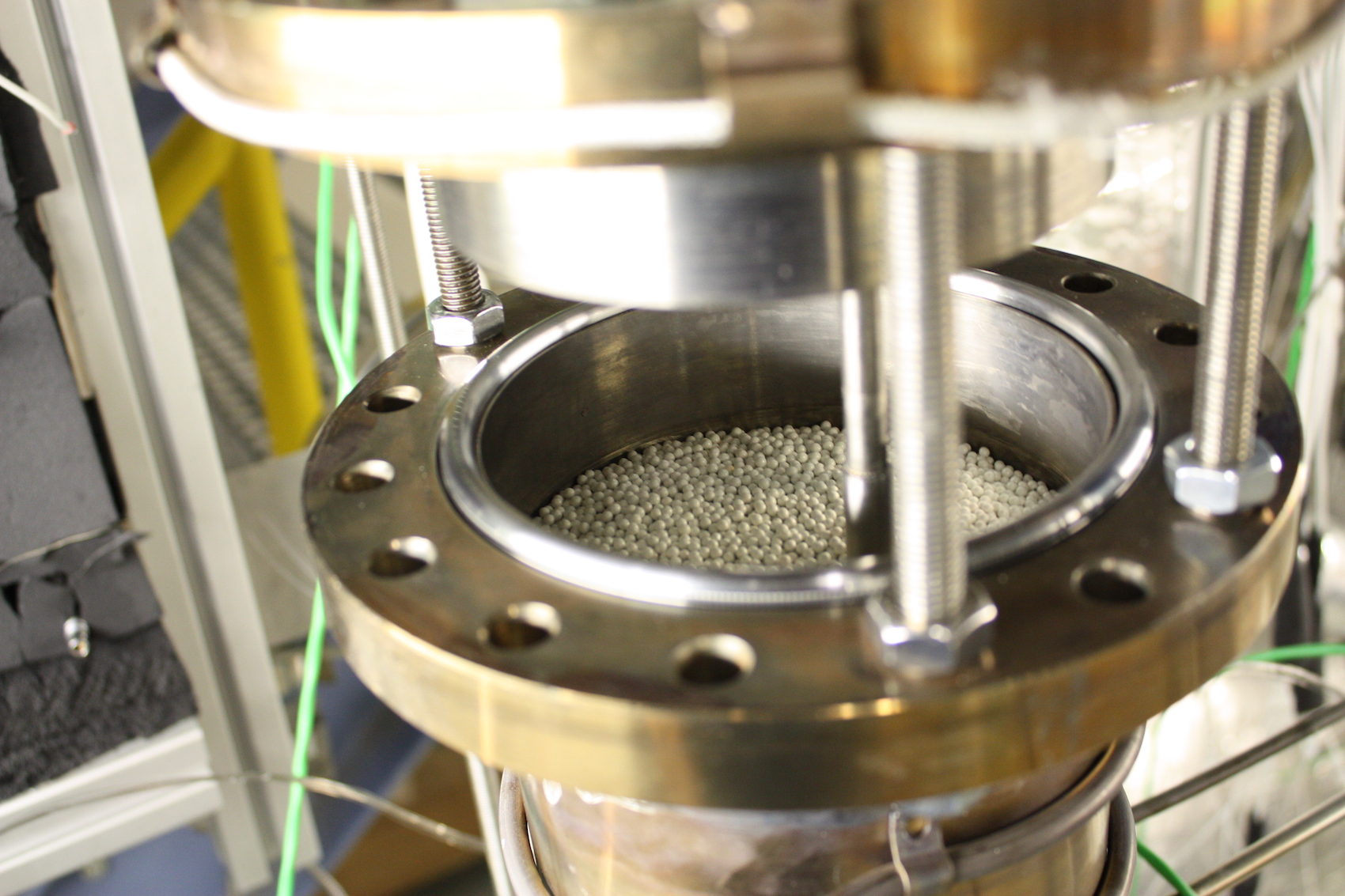 One of the ways to cut costs in thermal energy storage, whether standalone or as part of tower Concentrated Solar Power (CSP) is to use heat transfer fluids able to reach higher temperatures, and with a wider working range between hot and cold than today’s molten salts with their working range between “cold” at 290°C and hot at 565°C.

As a result, liquid metals are being researched as transfer fluids because they can attain heat above 1000°C and have a low melting temperature of about 150 °C, giving them a much wider working range of 150°C to 1000°C. But could liquid metals also be used in thermal energy storage?

In currently commercial tower CSP the thermal storage is in two tanks, hot and cold, but another promising technology to lower thermal storage costs that is increasingly being investigated is single tank – thermocline – storage, in which both hot and cold phase are present in one tank. (Thermocline refers to the mixed temperature region between the warm upper layer and the colder under layer in a liquid – for example in ocean water).

Lead author of the study Theoretical and Experimental Studies of Dual-Media Thermal Energy Storage with Liquid Metal, presented at the 2020SolarPACES Conference, Klarissa Niedermeier explained the advantages in a call from Germany.

“We’re working with liquid metals as heat transfer fluids because they have a very high thermal conductivity,” said Niedermeier. “Depending on what metal you use it’s about 30 to 100 times higher than molten salts. This is why liquid sodium has been used in receivers in concentrating solar power plants, as they can take high heat loads which are present in those thermal receivers.”

Her working group in the Karlsruhe Liquid Metal Laboratory, which investigates liquid metals in their dedicated lab, is doing a first-of-its-kind experiment; using liquid metal for both heat transfer and energy storage in a single-tank thermocline system at the Karlsruhe Institute of Technology (KIT).

“In a single tank you don’t have the empty volume. So you need less tank material,” she explained. “ Whereas in a two-tank configuration – When you have the hot and cold tank – you need tanks twice the size you actually need for the fluid because you’ll always have a huge part of the tank empty.”

So what are the challenges in using liquid metal in a thermocline thermal energy storage system?

Liquid metals are ideal for heat transfer, but have a low energy density. Their high thermal conductivity leads to an efficient heat transfer to pebble-like fillers sitting in the tank yet is disadvantageous for the separation of the hot and cold phase. The team is looking for the best candidates for a liquid metal and filler to pair with it to transfer the heat the most efficiently into the filler.

Which filler to store heat

Ideally, a filler material should have very high heat capacity combined with a very high density, both in terms of the atoms inside the material being closer together and also not having too much space between each one sitting in the tank, because the more dense the material, the more energy it can store.

To determine which filler candidates are best able to withstand liquid metals at high temperatures the team had previously screened various natural stones like quartz and filter gravel, borosilicate and soda-lime glasses, and alumina, zirconia, zirconium silicate and steatite ceramics.
After immersion for several weeks at 500°C they evaluated any damage with scanning electron macroscopy (SEM) and found that ceramics had the best performance, and selected a zirconium silicate ceramic which showed no interaction.

“So for our first test, we wanted to have a bed that consists of only one kind of filler that is well defined with known properties,” Niedermeier explained. “We can validate our simulations and do a lot of scientific work with it. There might be cheaper alternatives.” 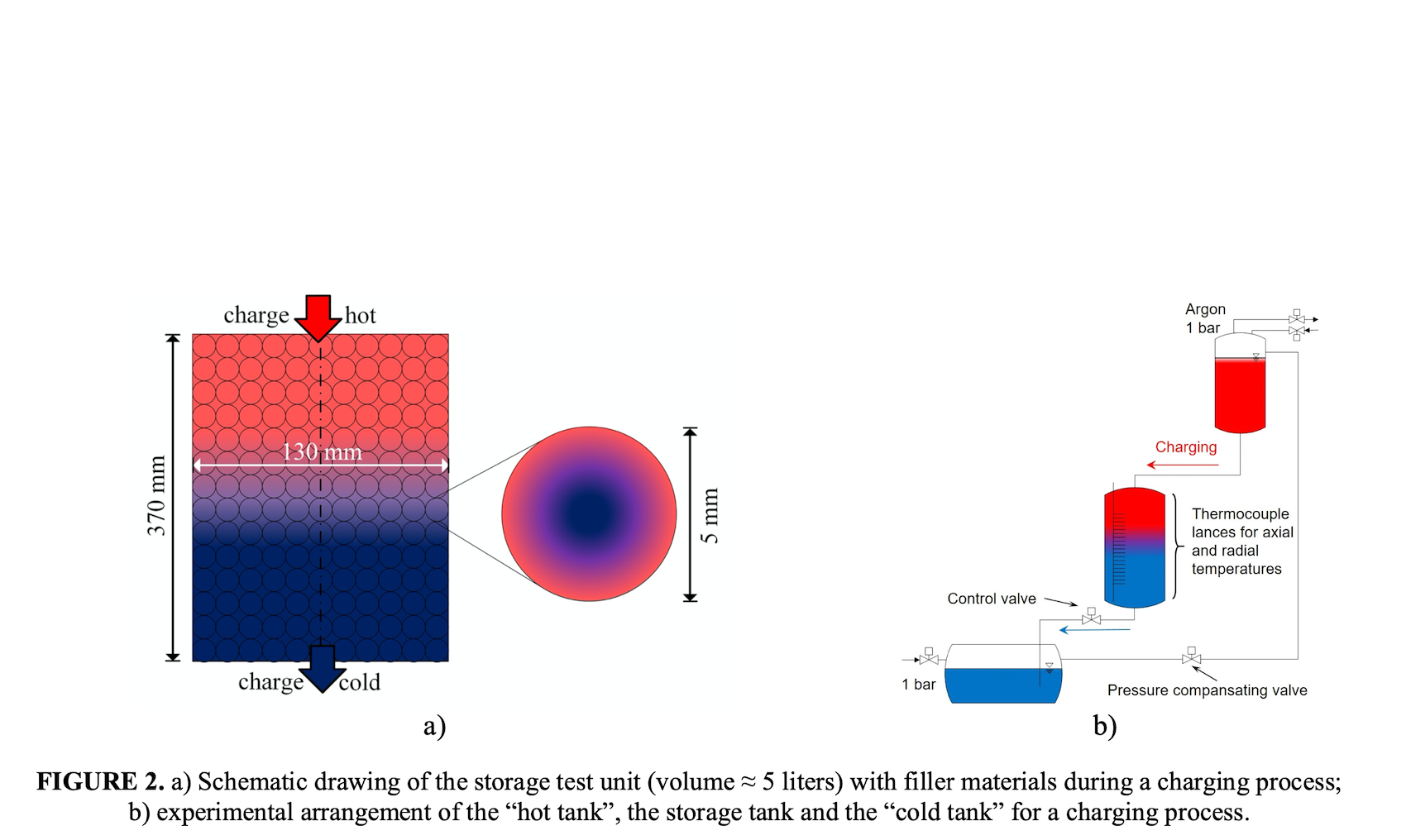 Initially, the team tested just the liquid metal alone, without the ceramic filler to have data to validate against their simulations. The ideal liquid metal would be the one that creates the least amount of mixed temperature at the thermocline point between hot and cold. Thermocline storage relies on the hot fluid on top staying hot, and the cold fluid under it staying cold despite being in one tank.

So ideally what is needed is a liquid metal that actually doesn’t mix (transfer its heat) quite so easily, said Niedermeier: “The perfect thermocline would be where the hot and the cold fluid would be sitting on each other without interacting, so there would be no thermocline degradation. You must minimize the heat transfer between hot and cold to not get a large area in between that is warmish. In the worst case the whole tank would be the thermocline. This is why low conducting filler material is used which stores the heat mainly and buffers the expansion of the thermocline.”

On the same background, an alloy of lead and bismuth, lead-bismuth eutectic (LBE), which at above its melting point of 124 °C proved to be superior to liquid sodium for thermocline storage in simulations.

In the first step they tested this small scale system in the lab’s testing liquid metal loop up to 380°C. Currently they are starting the next round with the filler material inside. Then the second step would be a 100 kWh pilot scale system, at up to 500°C and then, at up to 700°C. So there are additional steps before commercialization and they are not at the last one yet.