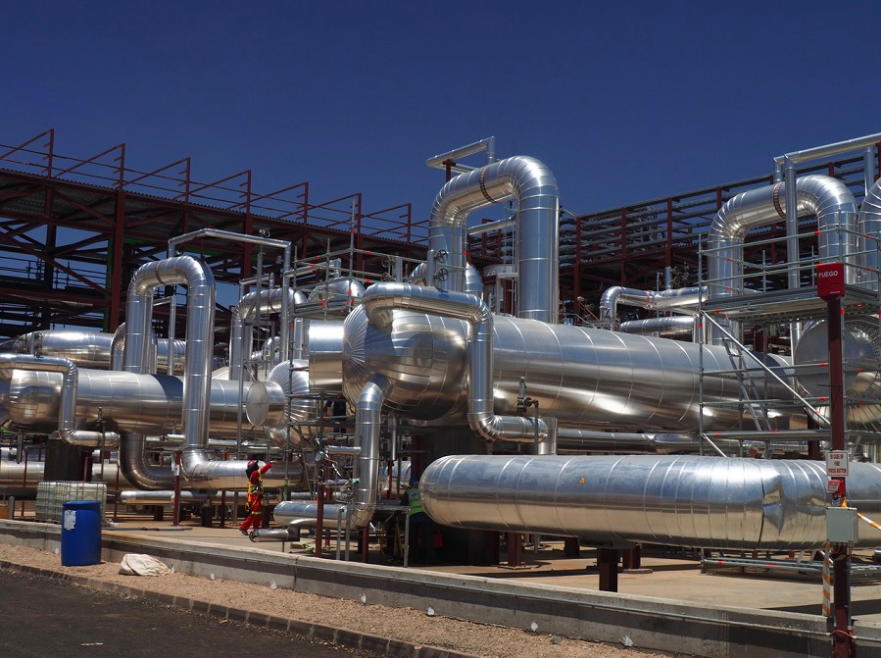 On Wednesday, Abengoa’s KaXu Solar One concentrated solar power (CSP) project, in South Africa’s Northern Cape, was presented with a Momentum of Change award by the UN Framework Convention on Climate Change. The award was presented at 23rd UN Climate Change Conference, under way in Bonn, Germany.

KaXu is a 100MW plant constructed on a 1,100ha site near Pofadder. It was recognised under the Financing for Climate Friendly Investment category as one of 19 “Lighthouse Activity of the Year” projects receiving an award this year.

KaXu is one of the first batch of 28 renewable energy projects unveiled by the Department of Energy in 2011. It is also the first CSP plant in SA to use parabolic trough technology. This entails the use of parabolic mirrors to reflect and concentrate the sun’s rays to produce heat, which then generates steam that powers turbines and produces electricity.

Energy storage allows the plant to produce firm, base-load electricity even when the sun is not shining, offering a remarkable low-carbon solution.

The project was officially opened in March 2015 and supplies clean energy to the equivalent of 80,000 homes while offsetting 315,000 tonnes of carbon dioxide emissions a year.

SA has set a goal of generating up to 17,800MW of renewable energy by 2030 to reduce its dependence on oil and natural gas resources. The country’s reliance of coal-driven power stations is the main reason why it is the 12th highest contributor to greenhouse gas emissions in the world.

KaXu is jointly owned by Abengoa Solar (51%), the Industrial Development Corporation (29%), and a community trust (20%).

The project, which created 4,500 temporary and 80 permanent jobs, is structured on a fully commercial basis. All the power is sold to Eskom under a power purchase agreement. Its uniqueness lies in its ability to supply base-load power, something that wind farms or solar photovoltaic (PV) plants cannot do and which has a significant economic value to the grid.

Each year, the Momentum for Change award recognises innovation and game-changing projects that address climate change and wider economic, social and environmental challenges.

Mafalda Duarte, head of the $8bn Climate Investment Funds (CIF), highlighted what the award means for SA: “The recognition underscores how concerted actions by a government can enable significant mobilisation of private-sector financial flows towards renewable energy technologies, including critically important base-load components of the energy systems.”

Funding for KaXu was co-ordinated by the International Finance Corporation (IFC), a member of the World Bank Group, which provided direct financing of R1.25bn ($143m) for two CSP projects in SA — including KaXu Solar One — and the 50MW Khi Solar One project, the first solar tower plant on the continent. The IFC also arranged $264m of parallel loans for the construction of these two projects.

The lenders co-ordinated by IFC for the KaXu project were the CIF’s Clean Technology Fund, the Development Bank of Southern Africa, FirstRand Bank, Investor Direct Capital and Nedbank.

“This financial innovation was instrumental in unlocking the concentrated solar power market in SA, attracting financiers, and driving down the costs, and leading to the first operational private-sector project of its kind in SA and the developing world,” said Duarte.

Other areas of focus for the convention’s Lighthouse Activities are Women for Results, Momentum for Change ICT Solutions, Planetary Health, and Climate Neutral Now. The work being done by the award recipients reflects how COP23’s Global Climate Action has been accelerating in the two years since the Paris Agreement was universally adopted in support of the UN’s Sustainable Development Goals.