Home >Latest In:>CSP News & Analysis>Making Solar Hydrogen with a Side of Carbon Nanotubes 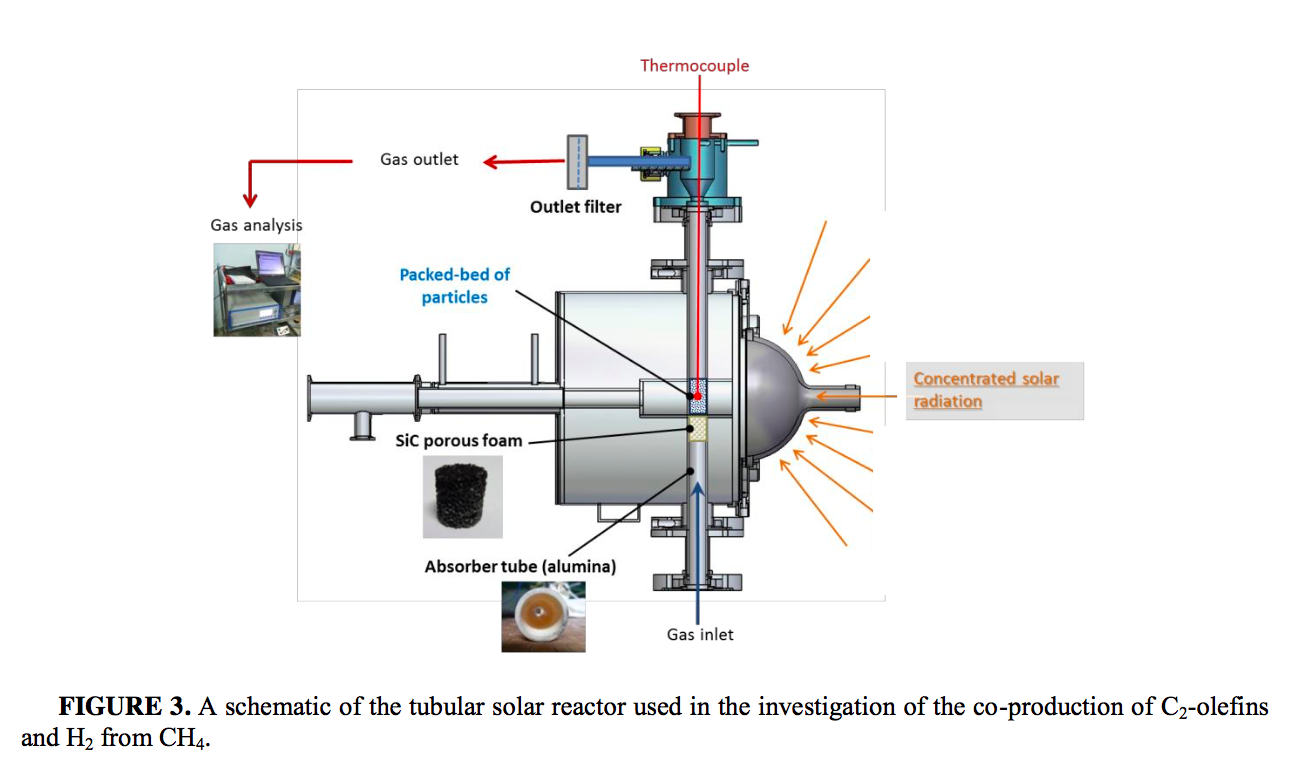 Two teams of solar researchers have developed a novel solar reactor and thermochemical process for making solar hydrogen that can generate in addition carbon black and graphite as well as carbon nanotubes. Working over a six-year period, the teams first developed the specific solar reactor, and then subsequently, the thermochemistry for the (patent pending) novel methane splitting solar hydrogen process.

Research thermo-chemists Hiroyuki Kimura and Satoshi Seo at the Heat & Fluid Dynamics Research Department at the IHI Corporation in Japan collaborated with the French solar themo-chemistry research team headed by Stéphane Abanades at the French National Centre for Scientific Research (PROMES-CNRS) in developing the prototype and the process in the Odeillo solar furnace.

The firm grew as a manufacturer of gas turbines, jet engines, boilers and turbochargers, and is well positioned to manufacture the machinery for clean energy such as solar thermochemical reactors used to make solar hydrogen.

“The Japanese government’s policy for future hydrogen society has been very influential to our company’s strategy on the development of technology and business for contributing to the realization of social sustainability by investing in our research to open up a new business opportunity to contribute to society’s long-term sustainability,” said Kimura.

The idea of the Hydrogen Society is to produce solar hydrogen in the world’s large sunny regions like Australia with solar thermochemical reactors, and to ship the zero emissions solar fuel to Japan and globally.

“Australia has large resources of both solar and natural gas. And also other countries from MENA (Middle East and North Africa) are possible. However small decentralized systems can be installed in many other places where solar DNI is adequate,” he said.

With the process validated at the research level, Kimura’s team plans to develop a small-scale two-step solar reactor prototype and launch it onto the market so customers can try it and offer feedback to help refine and improve both the solar reactor and the process. “At this point, we are looking for such customers as partners,” Kimura said.

He said that his firm would manufacture the solar reactor to make solar hydrogen once the team can find a way to make it cost effective. This market-driven approach informs their research.

“So, we need to propose and develop a cost-effective business which can produce not only hydrogen as a fuel but also high-value marketable carbons as industrial materials with solar thermal reactor,” he noted.

Compared to today’s fossil fuel hydrogen, solar hydrogen is still mostly at the R&D stage and remains more expensive. But one way to offset the cost of its production is to deliver valuable byproducts in addition to the solar hydrogen. This is the approach that Kimura and Abanades take.

“The cost for the two-step process will be more expensive than the standard solar reforming,” explained Kimura.

“However, this two-step process has an advantage. That is to produce high-value carbon materials such as carbon nanotubes as byproducts instead of CO2 that the reforming process produces. We have estimated that the carbon materials can outweigh such extra cost.”

Carbon fiber nanotubes reduce fuel consumption in transport because by weight this material is much stronger and stiffer than metal. Carbon nanotubes are also used in the electrodes of fuel cells. Carbon black is used in tires, inks, rubbers, and carbon graphite to make artificial diamonds.

He conceded that – at least in today’s market – the demand for carbon materials is a few orders of magnitude lower than for hydrogen. But as the world moves towards reducing carbon emissions over the next decades this market is likely to increase as more trains, trucks, ships and planes are constructed from lighter and stronger carbon fiber. 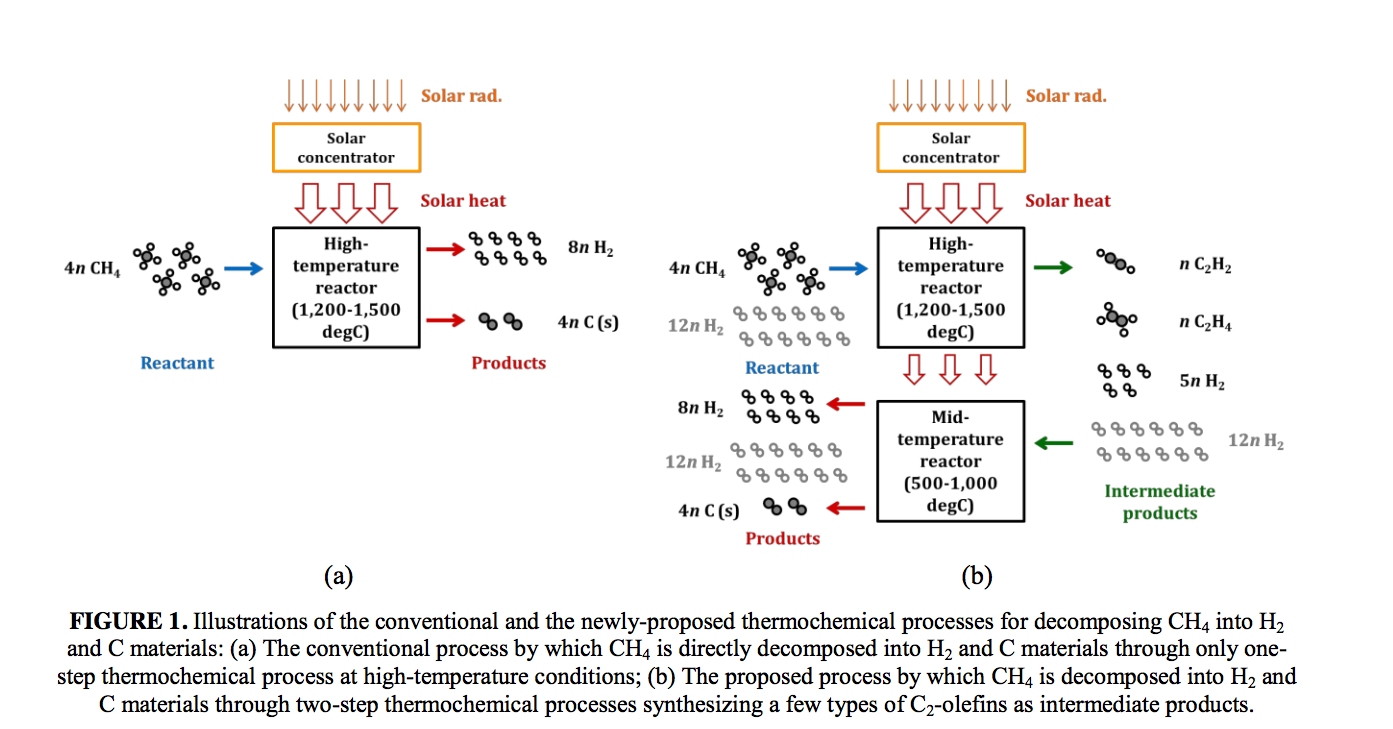 “When we conducted the solar experiments to investigate the conventional thermal decomposition of methane at the temperatures from 1,300 °C to 1,500 °C in 2013 and 2014, we noticed that very small amounts of acetylene, ethylene, and ethane were produced in addition to hydrogen and carbon as the products of thermal decomposition of methane. This finding from such experiences in the past solar experiments became a key – an opportunity to devise, propose, and try the new idea,” Kimura said.

In the first step, the solar field is used to directly heat a thermochemical and a thermo-catalytic conversion process in their solar reactor to decompose methane (CH4) into hydrogen (H2), acetylene (C2H2) and ethylene (C2H4).

In the second step, carbon nanotubes are formed by decomposing both produced acetylene and ethylene and remained methane at a lower temperature of under 1,000 °C, on the surface of iron, nickel or palladium catalysts. The yield of carbon nanotubes is increased by using this unsaturated acetylene and ethylene from the first step as additional carbon sources.

“One advantage of the two-step process is to be able to enlarge the yield of nanotubes, which can be improved by using acetylene and ethylene as additional carbon sources in addition to the methane as the primary carbon source,” said Kimura.

Problems avoided, and challenges ahead

There are two ways the process is novel, the particular two-step thermochemistry itself, and the rapid heating and rapid cooling of methane in the tube, which enhances the production of carbon black, graphite and carbon nanotubes.

“We combine two conventional elemental processes for producing hydrogen and various carbon materials from methane without producing carbon dioxide, for the purpose of avoiding a few technological problems of the conventional process of direct thermal decomposition of methane,” said Kimura.

The most important of these avoided technological problems is that at the high temperatures (of over 1,300 °C typically used in solar hydrogen thermochemistry) carbon deposits can adhere to the reactor walls; reducing efficient operation of a solar reactor.

Kimura and co-authors Seo and Abanades devised a process that operates at a lower temperature in the second step, below 1,000 °C, so the carbon adheres to the catalyst instead. The intermediate formation of gaseous C2-hyodrocarbons (C2H2 and C2H4) helps inhibit the obstruction of the reactor tube.

“The carbon deposits only on the surface of the catalyst at the mid-temperature (less than 1,000 °C) in the second step. No thermal decomposition of methane, acetylene, and ethylene occurs at such temperature, but catalytic decomposition occurs,” Kimura explained.

The process is not without its challenges: Because of the additional injection of hydrogen recycled in the process, the amount of solar energy required to reach the temperatures is slightly increased and the solar reactor design has added complexity.
___________________
Additional reading: