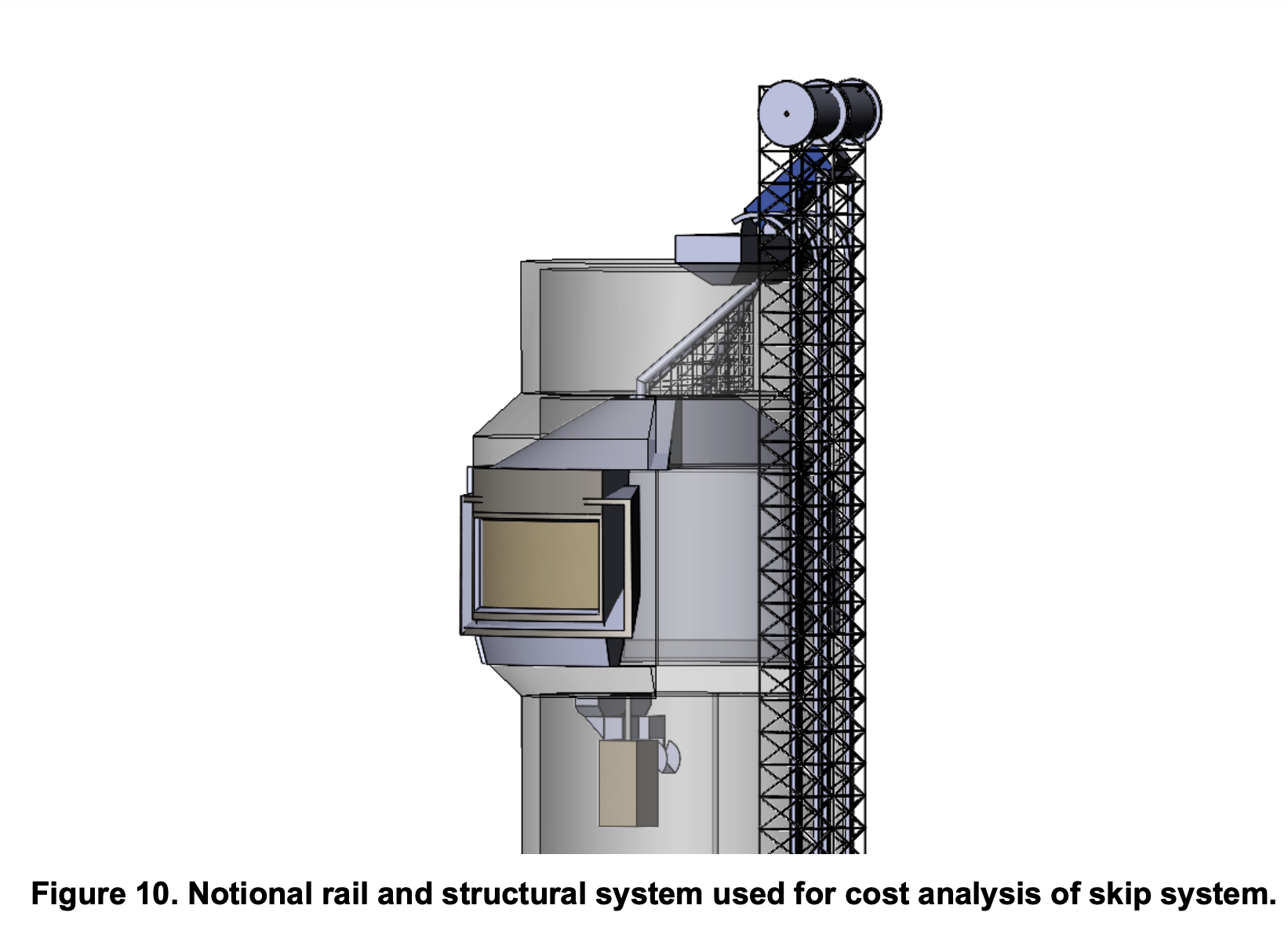 At any one time, almost 3 tons of hot sand would be in free fall for about 5 seconds hitting the pile beneath at 60 meters a second….  IMAGE@Jeremy Sment  (Kenzo Repole consulted on skip hoist design) Design and Technoeconomic Analysis of High-Temperature Particle Conveyance Components for a 100 MWe Concentrating Solar Power Plant

A Sandia study has taken a first glance at costing out conveyance systems for a cutting edge form of Concentrated Solar Power (CSP) tower technology – using particles of a sand such as bauxite to transfer heat at up to 1500 °C.

The study is one of the first to take a comprehensive look at integrating component systems such as skip-hoists and conveyors for transporting the sand. It finds that moving very large amounts hot particles is feasible, but these costs alone could amount to as much as 1 cent/kWh towards total system LCOE if more than one hoist or conveyor line is needed.

Design and Technoeconomic Analysis of High-Temperature Particle Conveyance Components for a 100 MWe Concentrating Solar Power Plant, proposes that system designers use gravity-based methods wherever possible to meet the overall 5 cents/kWh LCOE by 2030 goal set by the US DOE.

For a new generation of tower CSP, sand particles are being investigated for capturing and transferring solar heat. Because of the much higher temperatures most ceramics can hold, up to 1500 °C, this enables not only more efficient electricity production, but also direct solar replacement for fossil fuels in hard-to-decarbonize industries. These industries, like cement and steel production typically require high temperatures, making this technology uniquely important to meeting overall CO2 emissions targets.

In this technology, sand particles fall through an open receiver atop a tower where they are heated by the concentrated sunlight reflected from thousands of mirrors in a solar field. Utilizing gravity, the sand particles fall through the receiver to a hot energy storage bin and through a heat exchanger to a cold storage bin at the bottom, and are returned up the tower for reheating to resume the cycle.

However, carrying this much sand presents engineering challenges, not just in lifting sand 260 m back up the tower but then conveying it horizontally across to where it can be dropped.

So one of the key considerations is how to move so much sand. At approximately the 100 – 150 MWe scale that this solar technology would be used in replacing fossil fuel heat commercially, this will involve more than 50,000 tons of sand in continuous circulation. At any one time, almost 3 tons of sand would be in free fall for about 5 seconds hitting the pile beneath at 60 meters a second.

Borrowing from the mining industry

“We looked at the horizontal conveyance,” noted lead author Jeremy Sment. “What does it cost to move particles horizontally to the next component? What is it really going to cost to hold 50 million kilograms of particles at this temperature and to lift them to the top of a 250 meter tower. I’ve worked with skip-hoist experts, conveyor manufacturers, and silo design engineers and we’ve come to the conclusion that it is possible and is consistent with SETO’s electricity cost goals.” 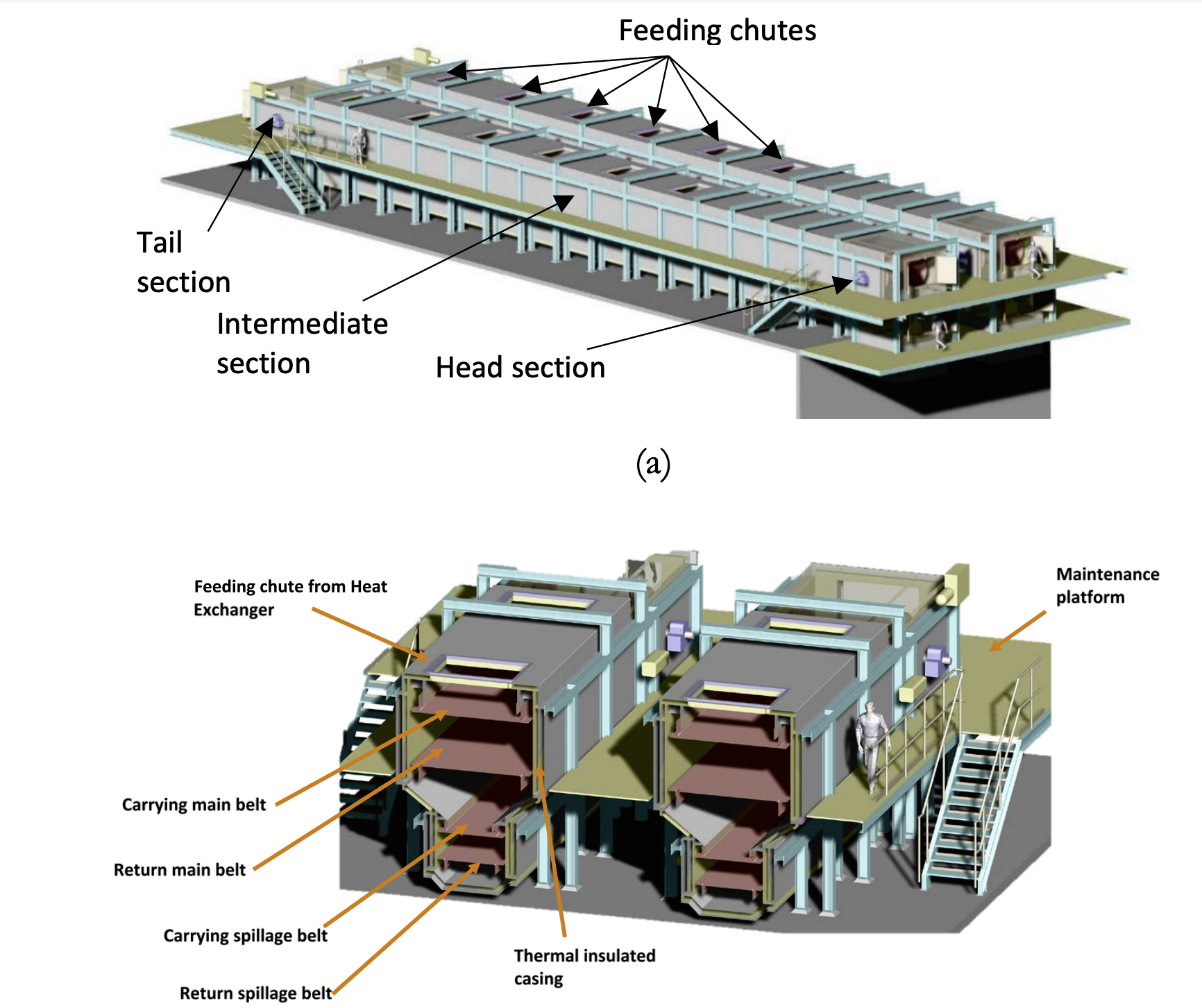 He added: “We also looked at tower-integrated systems that move particles by force of gravity, bypass conveyance machinery otherwise needed to move particles between components. We’ve developed a model for tower-integrated storage that will tell us how much more material is required in the tower walls to hold those particles up. Rough estimates suggest this might be on the order of 9 to 13 million dollars of extra concrete, extra reinforcing steel etcetera for the vertically integrated system”

This design promises to have a lower LCOE; however, solar towers with large amounts of storage have never been built before and more work is needed to quantify the extra reinforcement needed to support the entire weight of the particles that would be contained inside the tower.

A work in progress

While simple chutes might intuitively seem to be the cheapest option for offloading the sand, relying as they do just on gravity, Sment’s findings held some surprises. If adding extra height to the tower is required to support a chute from the skip to the receiver, the additional tower costs might actually make it the least attractive option.

“The receiver tower for a particle system may need to be higher in order to accommodate the overturning radius of the skips, the discharge bins, sloped ductwork to the receivers, and additional height for a particle heap wide enough to cover the width of the receiver,” the paper states.

“You have to raise the roof enough to get a hopper on top of the receiver that can flow particles into the receiver,” Sment said. “That’s costly steel work in there. So as soon as these inclines get so high that the tower walls have to be extended, mechanical conveyors start to become the lower cost option for particle handling.” 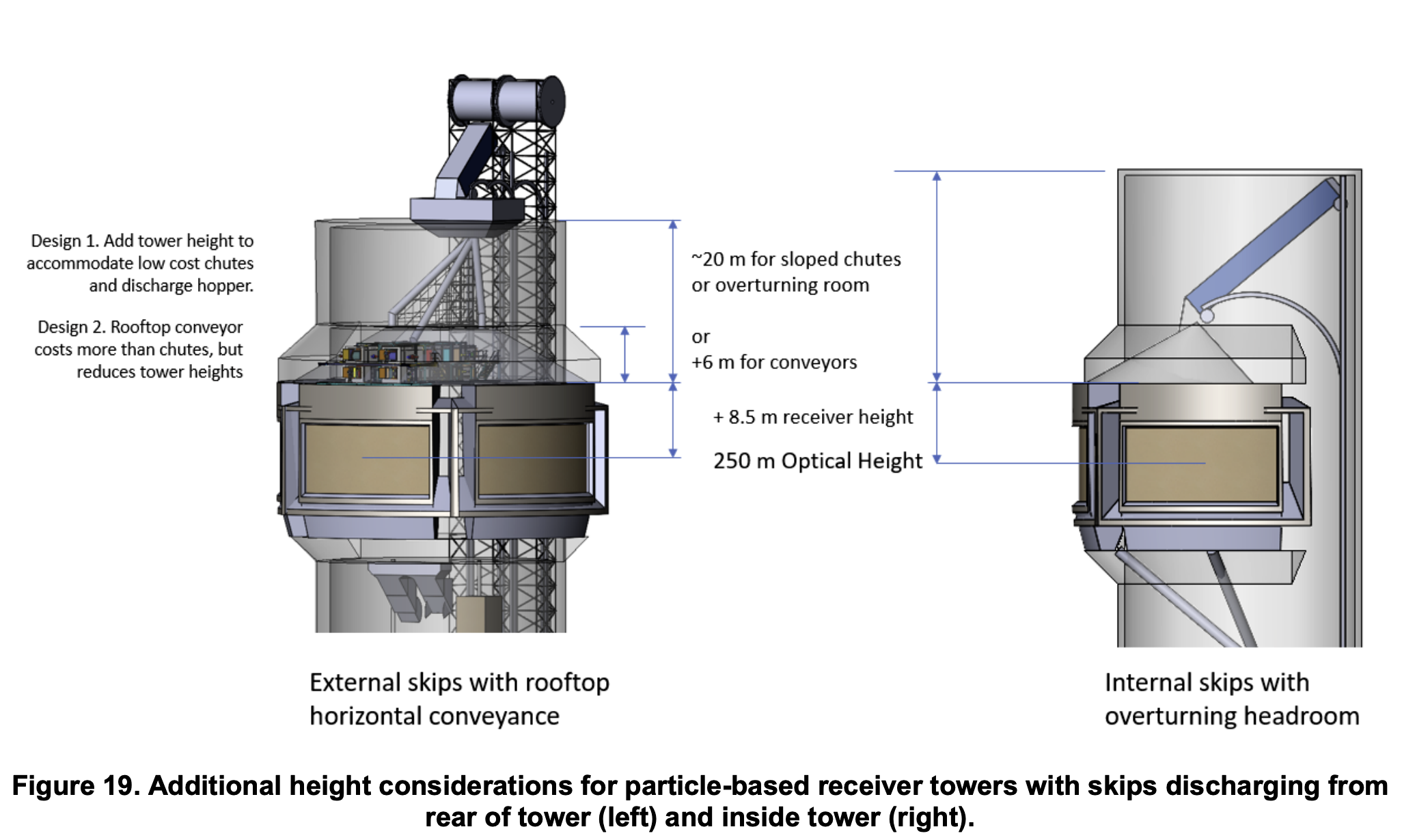 “The results of the earlier publication were kind of dismal,” he admitted. “We had to recalculate with some different ideas that did not rely so much on increasing the tower height that I think are much more appropriate for a six cent to 5-cent goal.”

A better approach might be to have a skip inside the tower dump its load of sand directly into a box above the receiver.

“We don’t need horizontal conveyance if we’re inside the tower as the skip can be designed to just discharge directly into the receiver,” he explained. “I don’t know if we’re going to use chutes. I don’t know if we’ll use the conveyor. But tower costs need to be well-understood to really make that decision.”

Similar investigation of commercial options determined that the hot storage bin must be above the heat exchanger.

“We’ve looked at elevating the storage above the heat exchangers,” Sment explained. “Because right now it’s too hot to move 800 to 1,000 °C particles. Anything over 640 °C is probably prohibitive without expensive metal alloys because we don’t want conveyor cooling systems or open air ventilation to take heat from the particles so they are limited by the softening point of steel. By elevating the storage bin, you can now discharge it directly into the heat exchanger which reduces the heated particles to about 500 °C where they can be safely moved in a particle conveyor.” 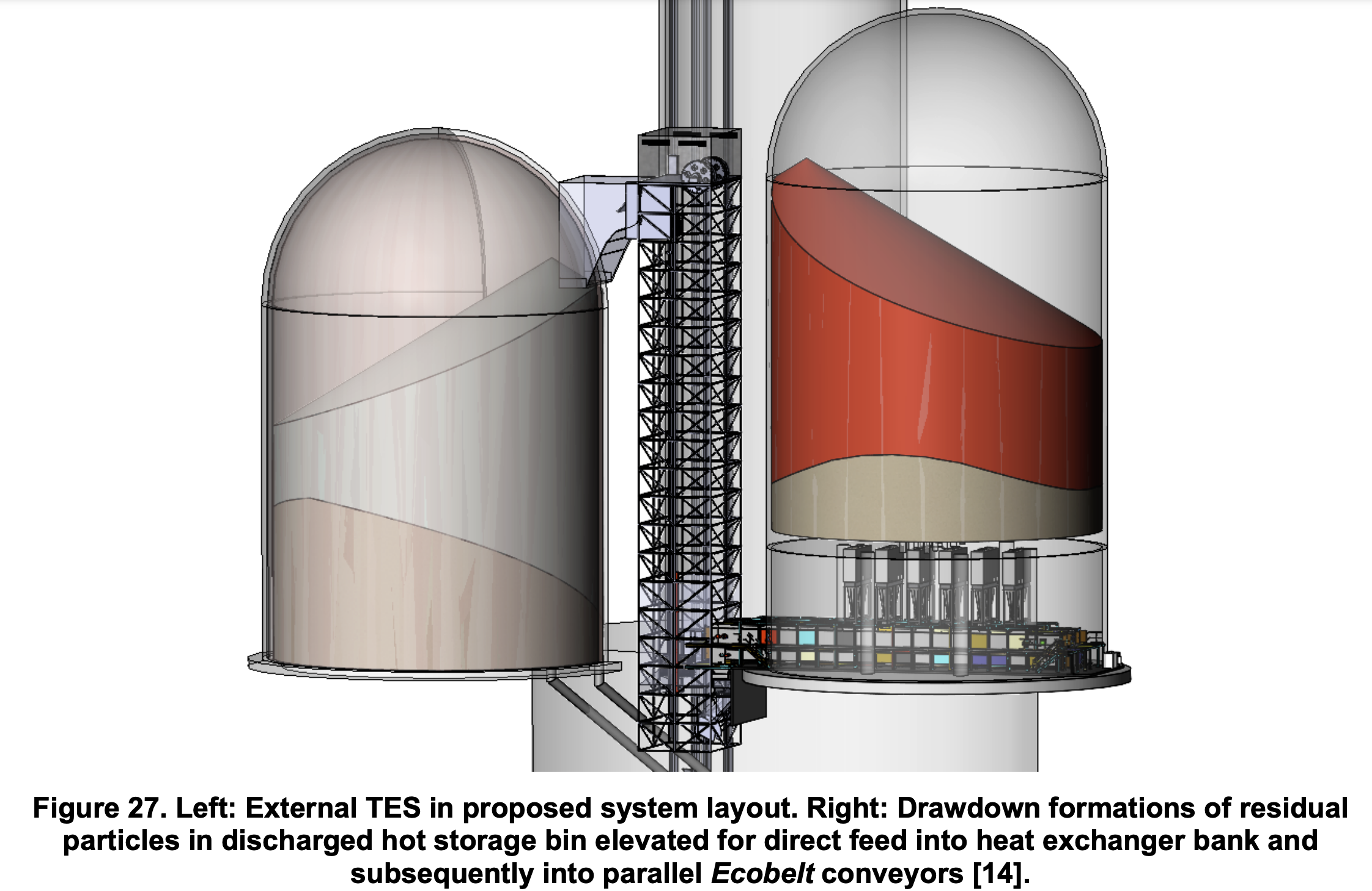 To do this horizontal conveyance at the bottom of the tower after the particles are cooled, one firm in Italy, Magaldi, with a trademarked Eco Belt would be able to handle particles at about 640 °C, at capacities up to 1800 tons an hour.

“And we would number those up in parallel, to get to the capacities we need. And for something on the order of $7 million dollars, we could use 2 conveyors to move 1000 kg/s of particles out from under the heat exchangers to the cold storage bin,” he noted.

Sment emphasized that this techno-economic comparison of real-world costs is a work in progress. As one example, using two skip-hoists to lift sand would exceed DOE cost targets. But a single skip-hoist would be approaching the weight limits of what has precedent in the mining industry.

In addition to numbering up the conveyance systems, there are also system design factors that can affect flow rates; this includes particle type, particle temperatures, and thermal energy storage capacity. These changes may impact the choice of receiver or heat exchanger, or could create engineering rework in related components, that might impact optimal performance so more systems analysis is needed.

There are many uncertainties, and more research and development is required, but this gives particle-based CSP developers a sense of the costs and limits of the particle circulatory system.