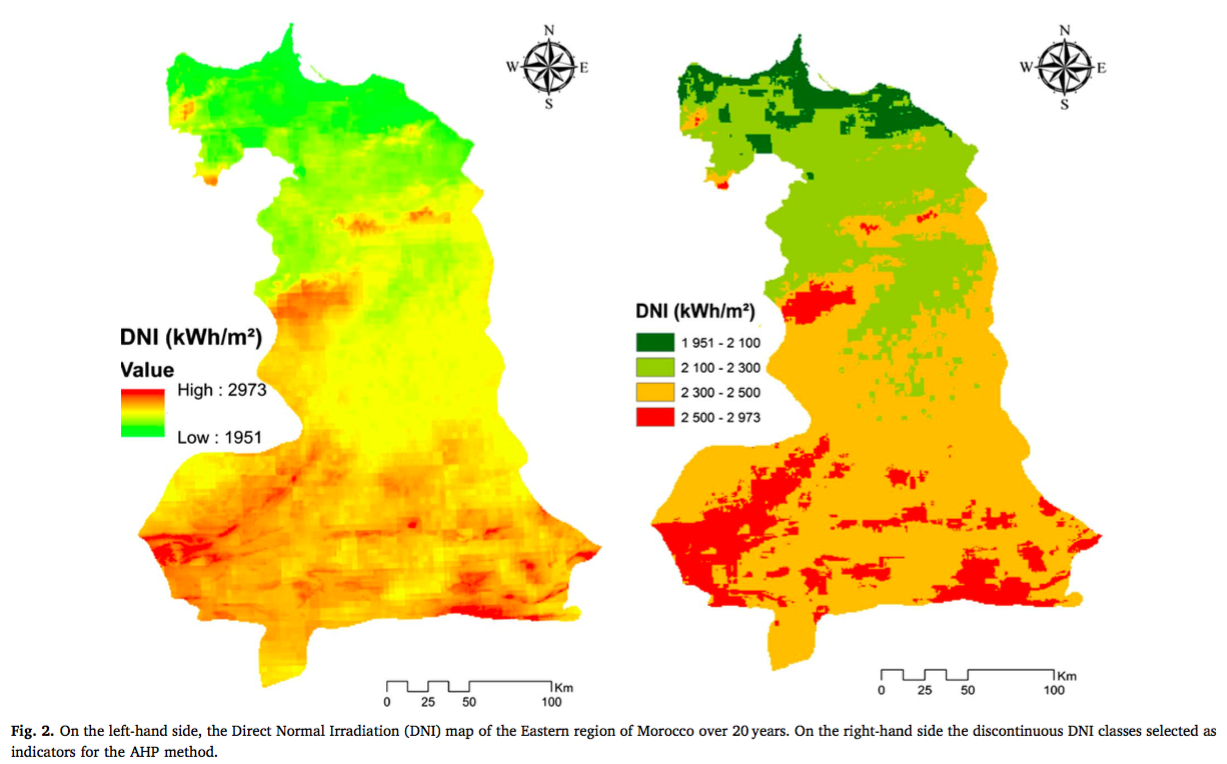 Dr. Ahmed Alami Merrouni, who heads up research on Meteorology and Solar Materials Degradation at Institut de Recherche en Energie Solaire et Energies Nouvelles (IRESEN), and his team determined which parts of Eastern Morocco could support CSP with wet cooling and where only dry cooled CSP would be appropriate.

In A GIS-AHP combination for the sites assessment of large-scale CSP plants with dry and wet cooling systems. Case study: Eastern Morocco the researchers provide a detailed and granular exploration of possible sites for new CSP in the Eastern Morocco province, a rural region of Morocco to the East and north of the Noor I,II,III CSP site at Ourazazate and the proposed new Noor site at Midelt. The study is relevant because the next phase of the Moroccan Solar Plan could include the construction of an additional 400 MW of CSP in Eastern Morocco. 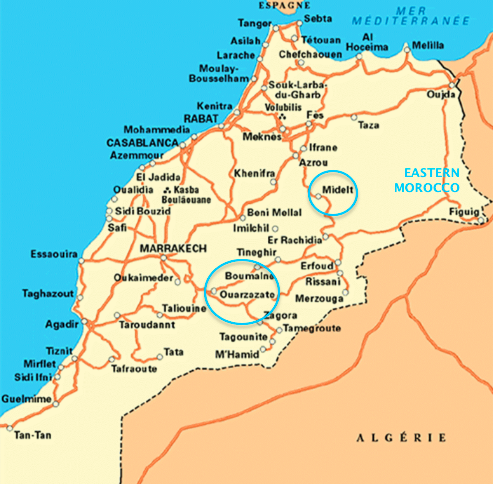 Eastern Morocco is a rural region of Morocco northeast of the Noor I,II,III CSP site at Ourazazite and the proposed new Noor site at Midelt

They started with the best map to date of Eastern Morocco’s Direct Normal Irradiation (DNI) – the solar resource used by CSP – a high-quality satellite solar map with the closest-ever spatial resolution: 1 X 1 km per pixel, and with twenty years of DNI data. This DNI solar map of Eastern Morocco was developed by the MINES ParisTech, the German Aerospace center (DLR) and ARMINES, in the framework of Solar-Med Atlas project.

On top of this comprehensive DNI map, the researchers then placed additional overlays from government data showing transmission lines, roads and rail lines. Then they included land suitability (no forests, hills or rivers) and availability (no ecologically protected regions, farms, industrial complexes, towns or cities) and placed an additional 2-5 km buffer zone respectively around each town and city to allow for expansion.

All of this combined information was then analyzed using the AHP process in order to determine exactly which areas could host dry cooled CSP (5.5% of the area studied), and which could support CSP with wet cooling (11.7% of the region). 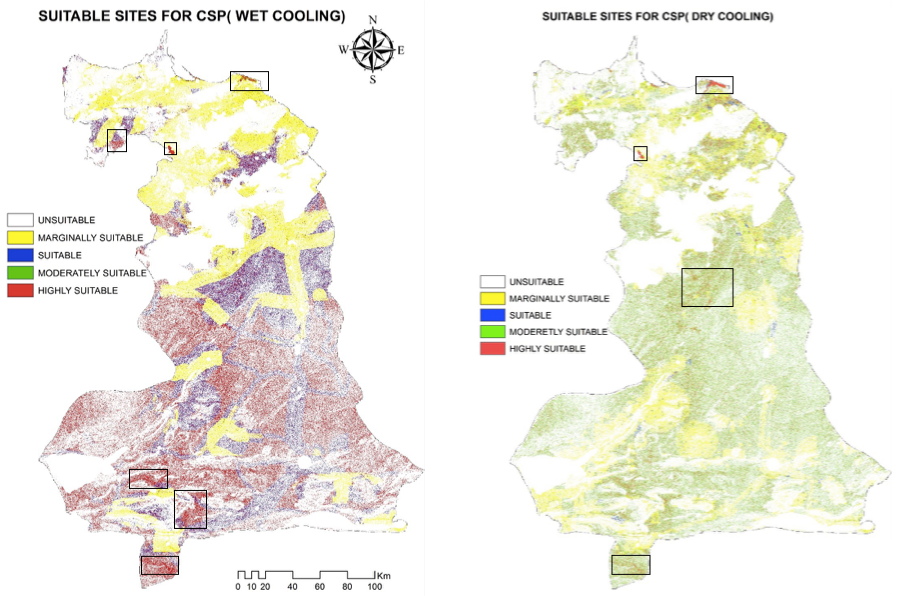 Why it matters: the Moroccan Solar Plan

Morocco pioneered solar targets early (it was in 2010 that it announced its 42% renewable target for 2020), and policymakers showed foresight in an early understanding of the value of CSP’s dispatchability for countering the intermittency of a renewable-rich grid.

By carving out CSP requirements so that wind, photovoltaic solar and CSP could combine in a stable grid system, Morocco is now headed for firm renewable power with much less intermittency than one that simply added photovoltaic (PV) solar and wind. CSP is a form of solar energy that can store its solar energy thermally for dispatch later when needed, whether day or night.

Morocco stands out also in meeting its targets with a steady pipeline of renewable installations coming online. In CSP alone, by the end of 2018, Morocco will have almost half as much as the entire United States with its 1,700 MW CSP fleet. That is because with the completion of Noor III, the 510 MW Noor CSP complex is expected to be online by October, resulting in a total of 535 MW of CSP in operation along with four smaller projects.

Eastern Morocco was originally under consideration for the site of the second NOOR project until Midelt was selected instead. “There was no study yet showing the importance of this region of Eastern Morocco,” Dr. Alami Merrouni noted.

The research is intended to remedy this paucity of data. The results are of interest not only to policymakers in Morocco and at MASEN, but also to international investors.

“We believe and hope that our findings will give an idea about the region’s capacity to host CSP and motivate people to invest in this region,” he said, adding that Morocco has recently adopted a new regulation allowing private companies to build large renewable energy power plants and inject the electricity produced into the national grid.

Morocco’s first commercial CSP project was in Eastern Morocco at Ain Beni Mathar, a 20 MW trough project as part of a larger 450 MW gas-fired power station that has been in operation since 2010. The owner and off-taker of that project is Office National De L’electricite Et De L’eau Potable (ONEE).

The Casablanca-based 50-year-old firm produces and delivers electricity throughout Morocco. But a revised law now allows private developers to build larger renewable projects if they have an offtaker like ONEE to take all the power generated.

“The new law liberates the investments in renewable energy power plants with a capacity above 50 MW,”Dr. Alami Merrouni commented. “I think that this region will be very attractive in the near future for investors, especially with the adoption of the new regionalization law. And of course, this will increase the population and the energy demand as well, and motivate people to invest in this region.”

The team investigated site suitability for dry cooled as well as wet-cooled CSP. “Locations with high DNI values are generally located in deserts, which is linked to lack of water and dust. Therefore, water consumption is an issue,” Dr. Alami Merrouni said.

“In some studies, they found that during operation, 90% of CSP water consumption went to the cooling of the power block and 10% to clean the mirrors surface. Consequently, the use of dry cooling is a good option in those locations, even though the efficiency of the plant will decrease a little. So in our study, we wanted to be open to both cooling techniques and provide information about the region’s capacity to host plants with both techniques.”

Dr. Alami Merrouni is the author of several papers on water issues and at the SolarPACES Conference China2014, he presented a paper on heliostat soiling: Reflected Solar Irradiance for CSP Plants Simulation – Impact and Importance for Solar Resource Assessment. 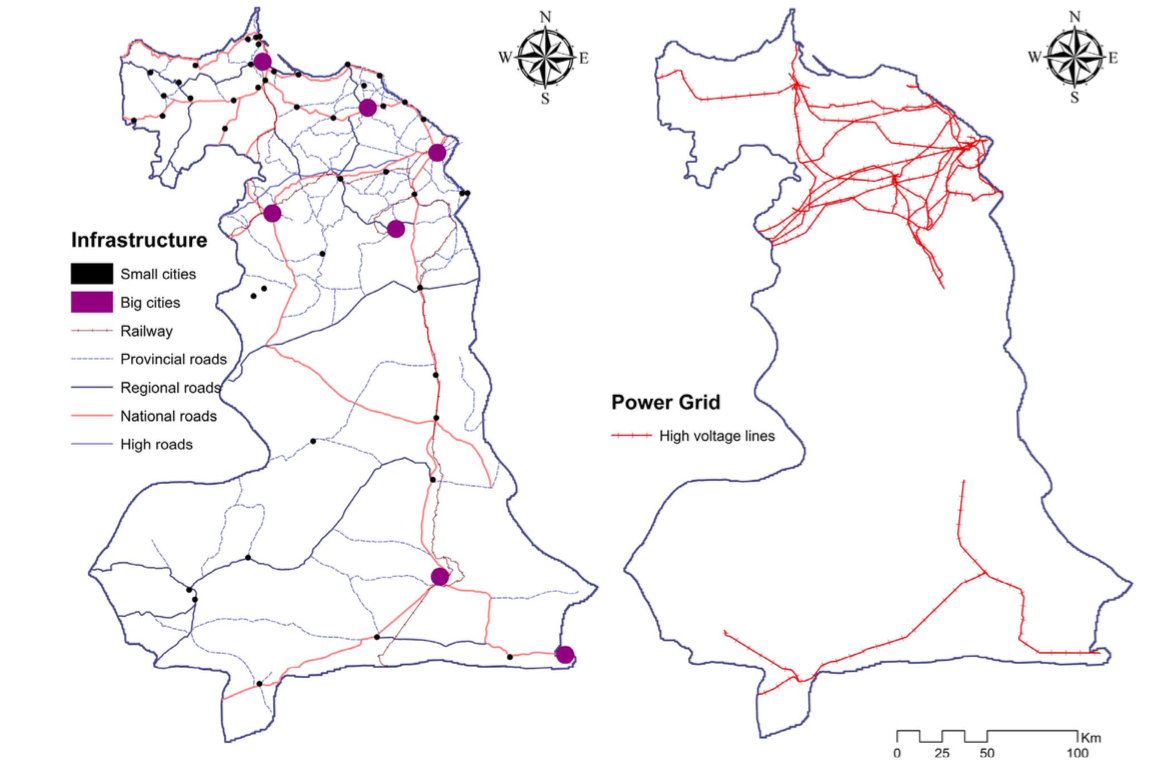 The findings reveal that some of the best regions are far from the HVDC lines, but the paper gives relatively little weight to transmission proximity (at 1% and 2%) because in Morocco transmission is relatively straightforward to coordinate. Transmission permits are handled by one entity, not by multiple jurisdictions the lines would travel through.

“We have one governmental office which is in charge of the grid. So, if you answer their specifications and requirements you will get the OK to build a transmission line,” Dr. Allami Merrouni commented. While conceding that this increases costs, he added: “In CSP site selection other factors have more importance; like the DNI. If a site is well irradiated and flat, the transmission line can be built and considered as investment costs.”

Measurement, comparison and monitoring of solar mirror’s specular reflectivity using two different Reflectometers
AA Merrouni, A Mezrhab, A Ghennioui, Z Naimi – Energy Procedia, 2017 – Elsevier
Abstract: Soiling and the resulting specular reflectivity are two of the most important factors influencing the efficiency of the concentrating solar power (CSP) plants. For this reason, and in order to schedule efficient cleaning cycles, it’s crucial for the operation and maintenance …

Investigation of Soiling Effect on Different Solar Mirror Materials under Moroccan Climate
AA Merrouni, F Wolfertstetter, A Mezrhab, S Wilbert… – Energy Procedia, 2015 – Elsevier
Abstract: This paper presents some first results of the effect of dust on different solar mirror materials in Morocco. For this purpose, thirteen glass and aluminum mirrors were exposed at the University of Oujda (Eastern Morocco) for a period of three months (from April to June) …

Electricity yield analysis of a 50 MW solar tower plant under Moroccan climate
HAL Ouali, AA Merrouni… – Electrical and …, 2015 – ieeexplore.ieee.org
This paper presents the simulation results of a 50 MWe solar thermal tower plant under the climate of Oujda, a city located at North-east of Morocco. For this purpose, one year of meteorological data with one minute step has been collected via a high precision …