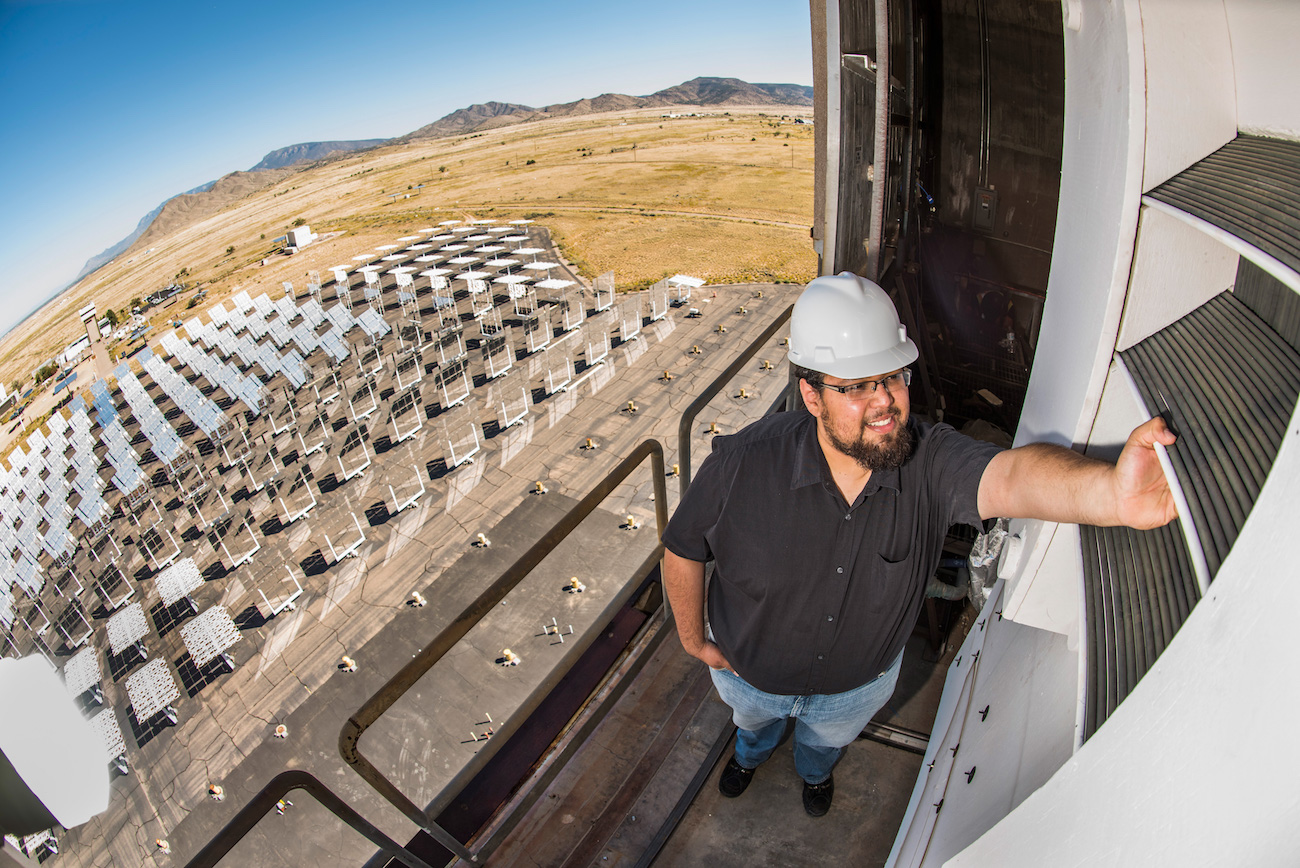 ALBUQUERQUE, N.M. — Sandia National Laboratories engineers have developed new fractal-like, concentrating solar power receivers for small- to medium-scale use that are up to 20 percent more effective at absorbing sunlight than current technology.

The receivers were designed and studied as part of a Laboratory Directed Research and Development project and are also being applied to Sandia’s work for the Solar Energy Research Institute for India and the United States, or SERIIUS.

SERIIUS is a five-year project co-led by the Indian Institute of Science and the National Renewable Energy Laboratory, sponsored by the U.S. Department of Energy and the government of India, that aims to develop and improve cost effective solar technology for both countries by addressing the barriers and challenges of each market. Sandia has led the group’s research in concentrating solar power, focusing on scalable systems.

While most concentrating solar power facilities throughout the world are large, Sandia engineer Cliff Ho says India is interested in developing 1 megawatt or smaller facilities that could provide the appropriate amount of power for a small village or community. Improving the efficiency of these smaller receiver designs is a key step toward making that goal a reality.

Sandia engineers developed and tested the new receivers at the National Solar Thermal Testing Facility, studying their ability to withstand high temperatures and pressures while absorbing sunlight as heat that can be stored or transferred to a power cycle to generate electricity. At Sandia’s facility, rows of mirror-like heliostats are aimed at a tall building with a central receiver installed at the top. The heliostats reflect and concentrate the sunlight on the receiver, which absorbs the sunlight’s heat and transfers it to gas flowing through the receiver’s paneling. The gas can then be used in a conventional power plant cycle to produce electricity or used with a storage system to be saved for on-demand electricity production when the sun is not shining.

Conventional receiver designs usually feature a flat panel of tubes or tubes arranged in a cylinder. These designs can absorb about 80 to 90 percent of the concentrated sunlight directed at them when considering reflections and heat loss, but Ho said design improvements to make the receivers even more efficient are needed to help reduce the cost of concentrating solar power and improve scalability.

“When light is reflected off of a flat surface, it’s gone,” said Ho. “On a flat receiver design, 5 percent or more of the concentrated sunlight reflects away. So we configured the panels of tubes in a radial or louvered pattern that traps the light at different scales. We wanted the light to reflect, and then reflect again toward the interior of the receiver and get absorbed, sort of like the walls of a sound-proof room.”

Previous research on making solar receivers more efficient has focused on special coatings that are applied to the receiver. However, many of these coatings are susceptible to breaking down over time, which reduces both the ability of the receiver to absorb sunlight and the potential lifetime of the solar receiver itself while increasing costs due to reapplication and repair. Sandia’s new fractal-like receiver designs have increased solar absorption efficiency without the need for special coatings.

Ho and the research team developed and tested multiple prototype fractal-like receiver designs scaled in size to work at small- and medium-scale concentrating solar facilities and found the designs that work best for each application.

“India has different market drivers than the U.S.,” Ho said. “The competition for renewable energy there is diesel generators, which create a lot of pollution and are extremely expensive. It gives us a little more flexibility to create a smaller concentrating solar power system that will work for their needs.”

The team pioneered the use of an additive manufacturing technique called powder-bed fusion to print their small-scale receiver designs from Iconel 718, a high-temperature nickel alloy. Ho said this novel printing technique provided a cost-effective way to test multiple fractal designs at a small scale and could be used in the future to print entire sections of larger solar receivers.

“Additive manufacturing enabled us to generate complex geometries for the receiver tubes in a small-scale prototype,” Ho said. “Fabricating these complex geometries using traditional methods such as extrusion, casting or welding would have been difficult.”

The new designs work with conventional heat-transfer fluids for concentrating solar power, including molten salts and steam, but they can also use other media for heat transfer and storage.

Ho said both the U.S. and India are interested in pursuing supercritical carbon dioxide to develop the next generation of concentrating solar power technology because it can reach greater efficiencies with smaller footprints.