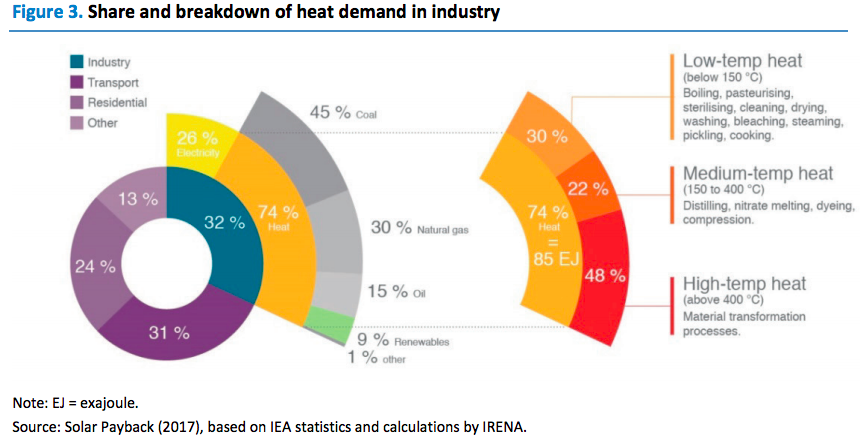 Heat represents three-quarters of industrial energy demand worldwide, and half of it is of low to medium-high temperature

Highlights from the IEA report with relevance for CSP:

Activity is accelerating with respect to solar heat for industries. While the deployment of small-scale solar water heating systems is slowing, that of large-scale solar-supported district heating systems and industrial applications is quickening (Weiss, Spörk-Dür and Mauthner, 2017).

A recent study has identified over 130 companies in at least 22 countries worldwide that have realised more than 500 industrial plants with an overall combined installed collector area of 416 414 square metres (m2 ) for process heat (Solrico, 2017). This represents an installed capacity of only 280 MWth, likely to produce 560 gigawatt thermal (GWhth) (2 PJ) of heat per year at most, assuming a relatively high capacity factor of 2 000 full load hours. The study may not cover all installations, however.

The vast majority of projects use non-concentrating technologies such as flat-plate collectors or evacuated tubes. These can be installed almost anywhere, as they use global solar irradiance, but they usually do not deliver usable heat above about 100°C. In recent years, however, new high-vacuum flat-plate collectors have been commercialised, which remain relatively efficient at temperatures up to 160°C (Horta, 2015). Concentrating technologies, such as Scheffler dishes mostly in India (Scheffler, 2012).

Fresnel collectors or parabolic troughs use direct irradiance only and are geographically limited to areas with good direct normal irradiance (DNI) – but as these linear concentrating technologies can reach or even exceed 400°C, they could be a mean of supplying medium high temperature process heat needs.

Central receiver systems or “solar towers”, which can achieve higher temperatures still, have so far developed in the power sector only. A handful of medium- and large-sized solar ovens, able to respond to all temperature requirements, are used mostly for research purposes (IEA, 2011).

Market has been primarily in low temperature heat

Another important reason for this prevalence of non-concentrating technologies rests in the relationship between solar heat cost and temperature level that makes competition with fossil fuels easier at low temperatures (Lovegrove et al., 2015) (Figure 5). The food and beverage industry, the service industry, and the textile industry, all of which mostly need low-temperature heat, are the main areas in which solar heat has been deployed.

Another example of low-temperature solar process heat is the 27.5 MWth system at Codelco mining company’s Gaby copper mine in northern Chile, the largest such system in service so far: it has 39 300 m2 of flat-plate collectors and 4 000 cubic metres (m3 ) of thermal energy storage, and supplies 85% of the process heat needed to refine copper. It was commissioned in 2013, in one of the world’s best areas for concentrating or non-concentrating solar power or heat.

There will likely be an acceleration in deployment of solar process heat in upcoming years. In Oman, US-based start-up company Glasspoint is currently building a much larger plant than all existing ones – not only individually, but taken altogether, as it will eventually reach a capacity of 1 GWth (also see the “Oil and gas extraction” section below). It will produce solar steam for Petroleum Development Oman’s enhanced oil recovery operations, saving large natural gas consumption and associated carbon dioxide (CO2) emissions.

Given its sheer size, this unique innovation, based on a reinvention of parabolic trough technology, will also shift deployment of process heat technologies to solar concentrating ones.

Meanwhile, the solar industry is shifting attention and commercial efforts from its traditional markets – household-level space heating and water heating systems – to emerging markets such as district heating systems and industrial users, although they still represented only 3% of the global solar heat market in 2015 (Weiss, Spörk-Dür and Mauthner, 2017).

District heating systems potentially have more long-term storage options and can combine a variety of resources, whereas industrial users’ heat needs are more evenly distributed throughout the year than those of households, including during the months with the best resource availability.

Collaborative efforts, such as those of the IEA TCP SolarPACES and TCP Solar Heat and Cooling (SHC) Task 49 “Solar Heat Integration in Industrial Processes”,2 facilitate this shift.

Various industries have teamed with academics and research centres to explore possible new uses of high-temperature solar heat, such as calcination of alumina for Alcoa (Nathan, 2016), phosphates for the Office Chérifien des Phosphates, or lime for Cemex (see Chapter 2, Section D. Cement).

Various German and South African institutions and companies are also collaborating to develop a rotary solar kiln that could be used to melt and recycle aluminium. In fact, research in this field can be traced back to the 1990s regarding process emissions (Steinfeld and Thompson, 1994; Koepf et al., 2017), and much earlier for energy (IEA, 2011).

Iron and steel is the second-largest industry energy consumer, claiming 23% of total global industry final energy demand, but it is the largest industrial CO2 emitter, with 28% of the sector’s total direct CO2 emissions in 2014 owing to more carbon-intensive fuel use (mostly coal) and considerable process emissions in the reduction of iron ore. This share accounts for 7% of total energy-related CO2 emissions, and is projected to increase to 10% by 2050 under the 2DS (IEA, 2017a).

Global crude steel production is about 1.7 gigatonnes (Gt) and growing. With a potential of 30% from scrap, 1.2 Gt of steel would come from processing 1.7 Gt of iron ore. The amount of hydrogen needed for the H-DR method would thus be 90 Mt, requiring 4 320 TWh of energy (assuming 70% electrolysis efficiency). Another 935 TWh would be needed for the rest of the process, i.e. a total of 5 255 TWh – with current technologies.

Cement is the third-largest energy consumer in the industry sector, accounting for 7% of total final industrial energy use, but due to important process emissions, cement has the second-largest share of CO2 emissions from industry at 27%, i.e. 6.5% of total energy-related CO2 emissions. This share is projected to double by 2050 under the 2DS, putting the cement subsector in first place.

The SOLPART project aims to develop at pilot scale a high-temperature (950°C) solar process
suitable for particle calcination in energy-intensive industries – typically cement or lime, but
also phosphate ores and others.

Supported by the European Union and the cement (Cemex,Mexico), phosphates (Office Chérifien des phosphates, Morocco) and other industries, andco-ordinated by the French Centre of Scientific Research using its solar oven at Odeillo in the French Pyrenees, the project is based on concentrating solar technologies.

SOLPART is expected to significantly reduce the need for combustible energy and related CO2 emissions; however, its applicability would be limited to areas with excellent DNI. It would provide energy for the calcination of limestone but would not avoid its process emissions, and it would not reach sufficient temperature levels for clinker sintering (1 450°C).