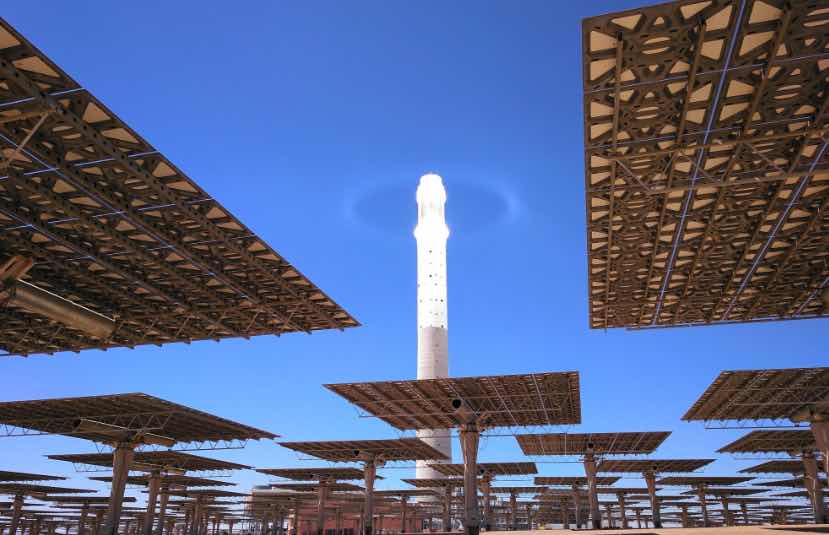 The world’s biggest solar tower power plant with molten salt storage has begun commissioning in Morocco, and is scheduled to begin production by October.

The 150MW Noor Ouarzazate III solar receiver, with 7.5 hours of molten salt storage is only the second big scale project of its type, and trumps its predecessor in size, the 110MW Crescent Dunes solar tower in Nevada.

The Noor solar tower is part of a massive 510MW facility being built by Spanish group Sener that combines this solar tower and storage facility with two other solar thermal facilities, using parabolic trough technology with between 3 and 6 hours storage.

It’s a landmark moment for Sener and the solar tower technology.

Sener built the 20MW Gemasolar solar tower near Seville in Spain in 2011 (which Renewconomy visited in 2016) at Ouarzazate (Morocco), but the technology has stalled since, over-run by the plunging cost of solar PV.

Now that the value of storage is being better recognised, the solar tower and molten salt storage sector is hoping that it may finally find a place in global energy markets.

SolarReserve, which built the Crescent Dunes facility, is due to begin construction on the Auror Project near Port Augusta, which will shade Noor as the biggest, and is also building another large facility in South Africa.

Other solar tower and molten salt storage projects are planned for the Middle East, Chile, and SolarReserve is pursuing more projects both in the US and Australia.

The key to the technology’s long term success will be its ability to rapidly reduce costs to keep pace with the falling cost of battery storage, and the interest in pumped hydro.

Noor has a price of $150/MWh, and Sener admits that further reductions are essential. A 700MW facility proposed for Dubai by Acwa Power has an estimated cost of $70/MWh, but it is believed these costs may be disguised by other solar facilities at the proposed energy park.

SolarReserve’s project in Port Augusta will deliver electricity to the South Australia government at an average cost of around $75/MWh, but it will sell capacity into peak demand periods at high prices to ensure it can meet its costs, estimated at more than $110/MWh.

The Noor III solar tower is rated at 150MW, but will deliver 140 MW of net capacity with the remaining 10 MW supplies power for the site itself, the so-called ‘parasitic’ needs that are normal at power plants.

Its 7.5 hours of storage is designed to meet the demand during five peak hours daily during which the electricity price is on average 18 per cent higher.

Sener says that it has started up the solar receiver, pointing the solar field’s 7,400 heliostats towards the receiver located on the top of the 250m tower.

The 115 square metre heliostats have already completed testing, and use a solar tracking technology that – like the receiver technology – is based around Sener’s space technology.

Once the receiver pre-heating tests currently underway are completed, the next step in the commissioning phase will be to circulate the molten salt throughout the receiver to heat them to the daily commercial operation temperature .

This milestone will be accomplished in the coming weeks. The last phase will consist in generating steam using the heat captured from the mentioned molten salts.