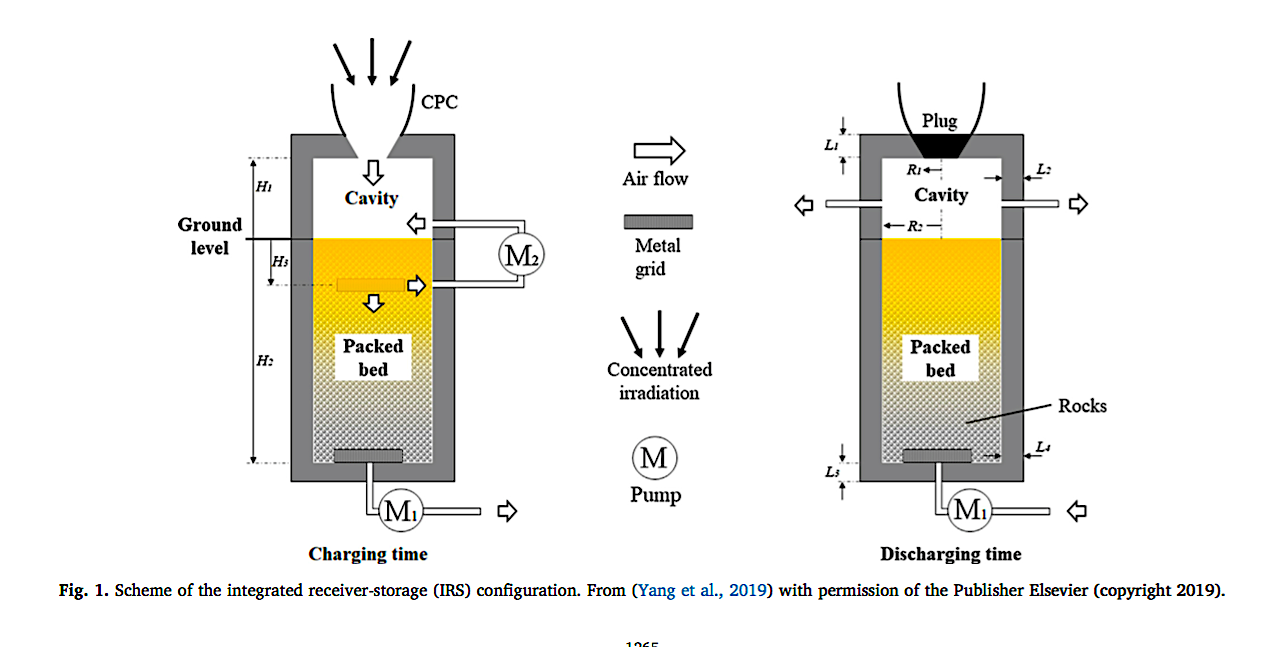 Among the many international researchers inventing improvements in Concentrated Solar Power (CSP), a Chinese-Finnish team has designed an interesting innovation. They propose integrating energy storage in rocks and fan-recirculated hot air into the solar receiver itself.

Normally in CSP the thermal energy storage of the solar heat is in molten salts in tanks on the ground, far from the solar receiver at the top of the tower where the heat is collected – or in Trough CSP, far from the receivers in the solar field (How CSP works, trough, tower etc).

Instead, this team proposes combining both solar receiver and storage in the same unit, and placing it on the ground, under a beam-down optical reflecting system.

With no need to build a separate thermal energy storage tank (How CSP storage works) the researchers see potential for cost-cutting in their combination receiver with storage, and the particular design also allows for additional efficiencies.

“The advantage of our novel integrated receiver storage system is a more cost effective compact structure, and it also has higher charging efficiency and absorber efficiency compared to the conventional receiving systems with separated receiver and storage units,” explained co-author Song Yang, a doctoral candidate at China’s Southeast University School of Energy & Environment. 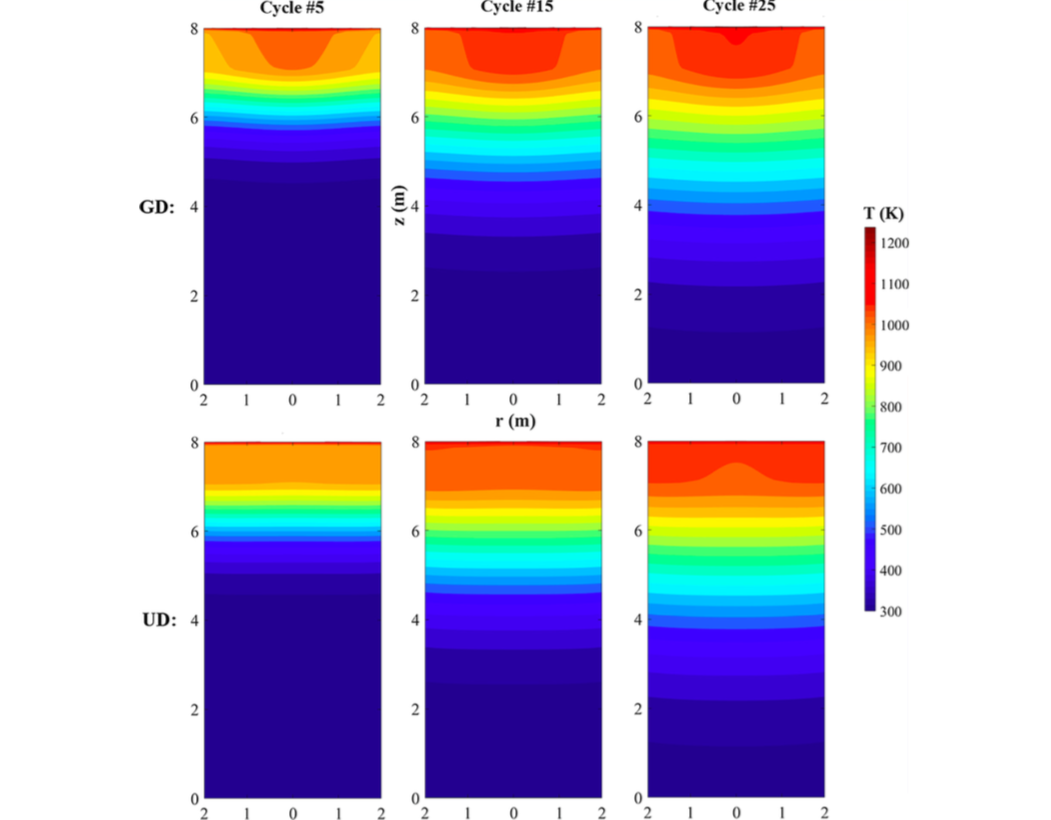 Fig. 8. Isothermal diagrams to the vertical-section of the packed bed after 5, 15, 25 charging cycles using a Gaussian (GD) and uniform distribution (UD) as the boundary condition. IMAGE@Yang et al

Although the idea builds on earlier research, this solar receiver design incorporating storage in rocks and fan-driven hot air in a single unit is the first of a kind.

“The integrated receiver/storage idea is not initially proposed by us; Slocum et al have done a similar prototype, but in their design they used a liquid solid heat transfer; molten salt. We just make use of air from the surroundings and rocks in the packed bed,” said Yang.

“Second we propose a reheating device for recirculation and this is very new. Air is not very good at heat transfer, so by using reheating fans to recirculate the air we can enhance very much the heat transfer performance of the packed bed, so we have somewhat overcome the drawback.”

Due to the novel design of directly radiative heat transfer as well as circulation flow, their design facilitates a higher temperature process, with a good solar to exergy conversion ratio (how much thermal energy can be converted to power) of 52% and charging and discharging efficiencies well beyond 99% and 92% at 770°C.

Because the rocks are solar heated from outdoor air temperature (so from say 10°C to around 700°C) the result is a much greater working range, resulting in a much higher efficiency, making for lower cost electricity production.

“Rocks can suffer much higher temperatures than molten salts, up to 800°C,” Yang pointed out. “Why not use rocks? They are cheap and easy to access. So our new design can probably make a high temperature dispatchable CSP possible.”

After completing a stint working with colleagues in Australia, Yang has just returned to his home university in Nanjing where the 450 kWth demonstration plant will be built and tested. Lamps will simulate 900 suns of reflected sunlight, bounced up to the reflector and beamed down onto their receiver/storage underneath.

The test is indoors, because like Finland; Eastern China, where the university is located lacks the solar resource for CSP operation. But Yang said that if the demo results, which he expects to see in two years, are promising, then the next step will be outdoor demonstration, probably in Western China. Of course, once proven, Yang believes that the design would be applicable globally in every high DNI region suited to CSP.

The container of rocks will be sunk into the ground, to prevent ratcheting, which can happen when any solid objects are heated in containers. If the rocks are heated up they might expand more than the tank can, causing the tank walls to deform, resulting in tank failure. So the team plan to sink the packed bed of rocks into the ground, so the lateral earth pressure prevents the buried tank wall from expanding outward during the heating phase. 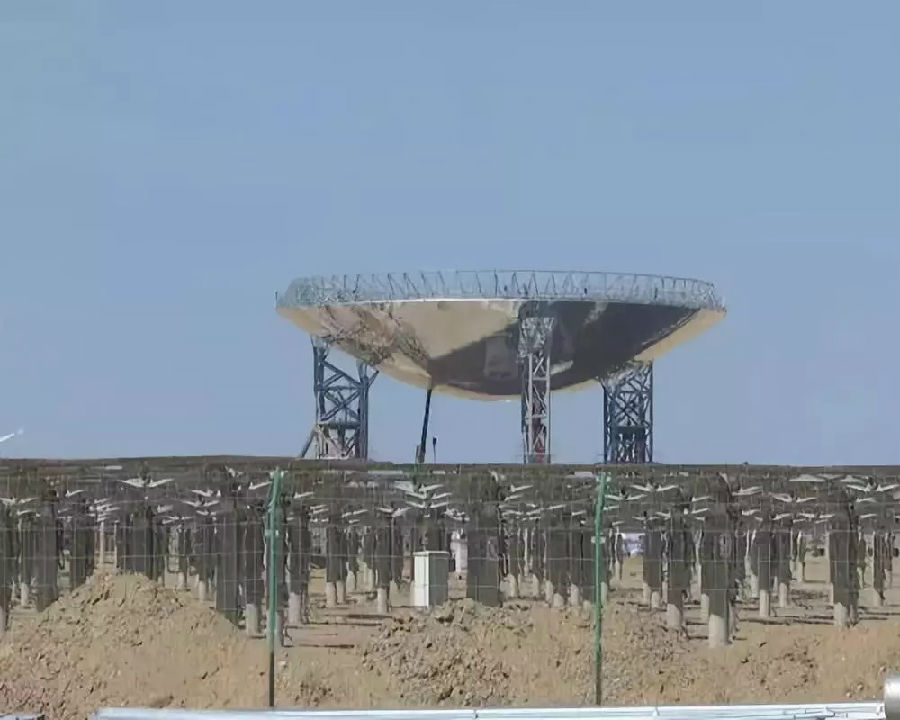 Advantages and challenges of a beam down CSP system

In beam down, a heliostat field like one for tower CSP reflects beams of sunlight from a solar field of mirrors or heliostats up to a raised central “bowl” of hyperbolic mirrors. These secondary mirrors refocus the beams down onto a focal point underneath where the solar receiver is positioned.

Beam down is itself a very new type of CSP, only prototyped in the UAE at Masdar. and a few other  international testing labs. Although it is very novel, the world’s first industrial scale 50 MW beam down project just began operation in 2019 at Yumen in China, as part of its pilot CSP program. Completed in just 3 years, it comprises 15 modules and stores thermal energy for 9 hours.

However, as a new CSP technology, manufacturing issues and cosign losses in beam down’s secondary mirrors bring as yet unresolved challenges that are still being worked on at the R&D level by Yang and other researchers in the international SolarPACES network.

“The biggest drawback of the double reflecting system is that the optical accuracy for the central reflector, usually a hyperboloidal mirror, is very demanding due to a high sensitivity to overall optical efficiency and concentration ratio. This is somewhat difficult to manufacture at the industrial scale; in the other words, not cost-effective,” he explained.

Secondary reflection itself also loses almost 10% in optical efficiency. “But I’m confident the whole other research community internationally can increase the optical efficiency,” Yang concluded. “We are just trying to find a new way, a fundamental method, a mathematical way to design the segmented mirror.”