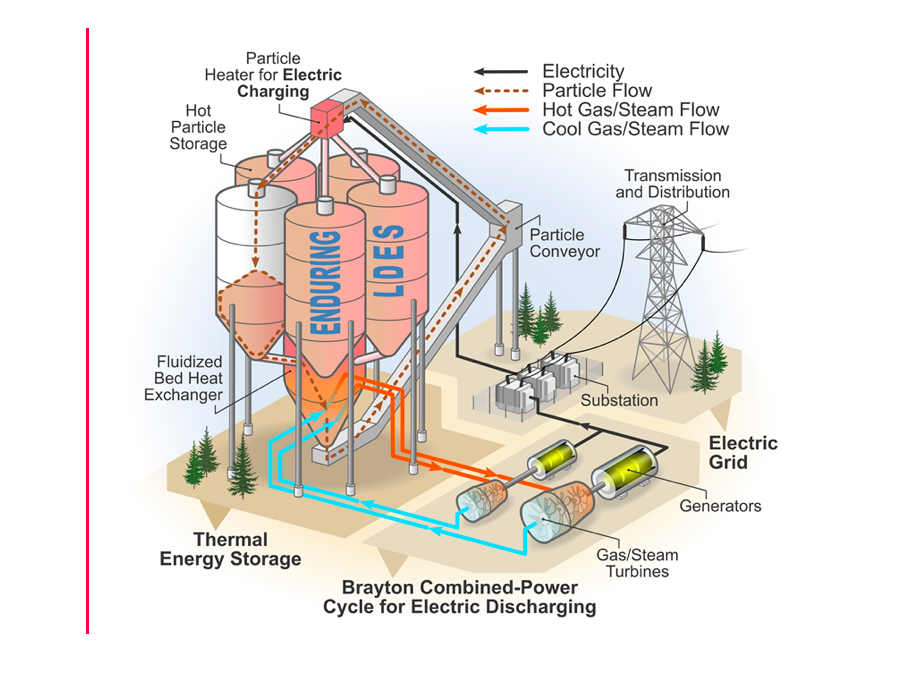 ARPA-E has challenged researchers to innovate a storage technology that can be deployed in almost any location and charge and discharge electricity, at a low fixed cost per cycle, for up to 4 days. The DAYS (Duration Addition to electricitY Storage) challenge is to supply an unmet market need – to provide grid-scale energy storage at a cost comparable to pumped hydro (currently supplying 95 percent of global storage), but that, unlike pumped storage hydro, could be sited anywhere.

Among the awardees, the DOE’s National Renewable Energy Laboratory (NREL) has been funded with $2.8 million to realize this goal with a thermal energy storage concept. The NREL proposal is to develop a modular and scalable thermal storage system that can operate at the scale of conventional thermal power stations, from 100MW like a typical natural gas power station or even up to 300MW like a coal power station.

The ARPA-E targeted cost is 5 cents/kWh, which includes a 2.5 cents/kWh projected cost for incoming electricity from solar or wind, so the storage portion must be no more than 2.5 cents/kWh. The NREL team believes that they can meet this target.

Their approach is to use electricity when there is surplus solar or wind, to heat a thermal storage material stored in concrete silos. When electricity is needed, the stored heat is then released to power up turbines and generators to send the stored energy back onto the grid.

The NREL team will test run their thermal system to ensure that it can run off stored energy for up to four days. The long-duration storage being developed under the ARPA-E project is intended to meet a very different need than batteries, which relieve instantaneous transmission congestion, stabilize voltage and frequency levels. DAYS storage must supply reliable low-cost generation over days, that could keep running cycles for many years.

Batteries are able to recoup very high prices in market systems for instantaneous power when demand skyrockets. In Australia, instant prices have gone as high as $14,000/MWh. With this potential for very high profits, which enables fast recouping of investment capital, battery contracts can be set at very low overall prices. By contrast, NREL’s long-duration thermal storage would be capable of years of cycling at a lower per-cycle cost than batteries, but at a higher per-kWh price.

Up to four days of cheap energy storage in hot sand

The obvious inspiration for NREL’s solution of long-duration storage is the low-cost thermal storage of Concentrated Solar Power (CSP). Molten salts lose less than 1 percent of their stored heat per day, so this material would have no problem storing heat for days.

But instead of storing the heat in molten salts, the NREL team is taking a leaf from some very advanced CSP research in national laboratories like NREL around the world, to store its solar energy in sand, because sand can hold much higher temperatures. Sand can reach more than 1,000°C without degradation. Also sand would improve upon the thermal efficiency of molten salts, as it has a higher temperature differential, between 300°C and greater than 1000°C.

The NREL research is led by Zhiwen Ma, the holder of patents in fuel cells and CSP and a senior engineer in NREL’s Thermal Sciences R&D Group. “We have higher energy density; so we would have a smaller footprint for similar heat energy capacity,” Ma explained. “And the other thing is, because our Brayton combined cycle power system can be derived from a gas turbine combined cycle, it avoids the risks and lengthy development of a power system.”

The sand would be heated using electricity and held in tall concrete silos till it’s needed, cycling back after its heat is extracted by the heat exchanger to discharge the electricity. The researchers will test various sands to use for the storage medium, which once heated would pass through a heat exchanger to extract the heat to run the existing plant power cycle.

These thermal energy storage plants wouldn’t need the good solar resource of CSP, because this thermal energy storage will be heated by electricity, not by a solar field reflecting sunlight. This means this storage could be sited anywhere, near big wind farms in low sun regions like North Dakota or near big solar farms in California where curtailed solar already results in midday prices near zero.

Such a thermal energy storage plant could site wherever existing gas or coal plants will need a new revenue stream to be part of an energy supply compatible with a safe climate, from India to Germany and from Pennsylvania to China.

Using electricity to heat thermal storage may not be as ideal in engineering terms, but sometimes it is not the most direct path that finds its niche in a market, but rather, one that has the most win-win solution to a market need.

When solar and wind overproduce in relation to demand, they are curtailed, and when they are curtailed, they are not going to be earning anyway, so it is at no cost to instead send their surplus power to storage. So even if it is inefficient to use electricity to go in and out of thermal storage, electricity-driven thermal storage would be an efficient use of an over-abundant resource.

And solar and wind have the momentum to be a big part of the new energy economy – but only if we can add enough storage at lower cost and over longer durations and more cycles than batteries can provide. So retrofitting fossil plants into storage is efficient clean energy and climate policy, because it could ‘mop up’ spilled wind and solar and also could be sited in existing thermal plants to facilitate a new life for fossil plants to serve a carbon-free world.