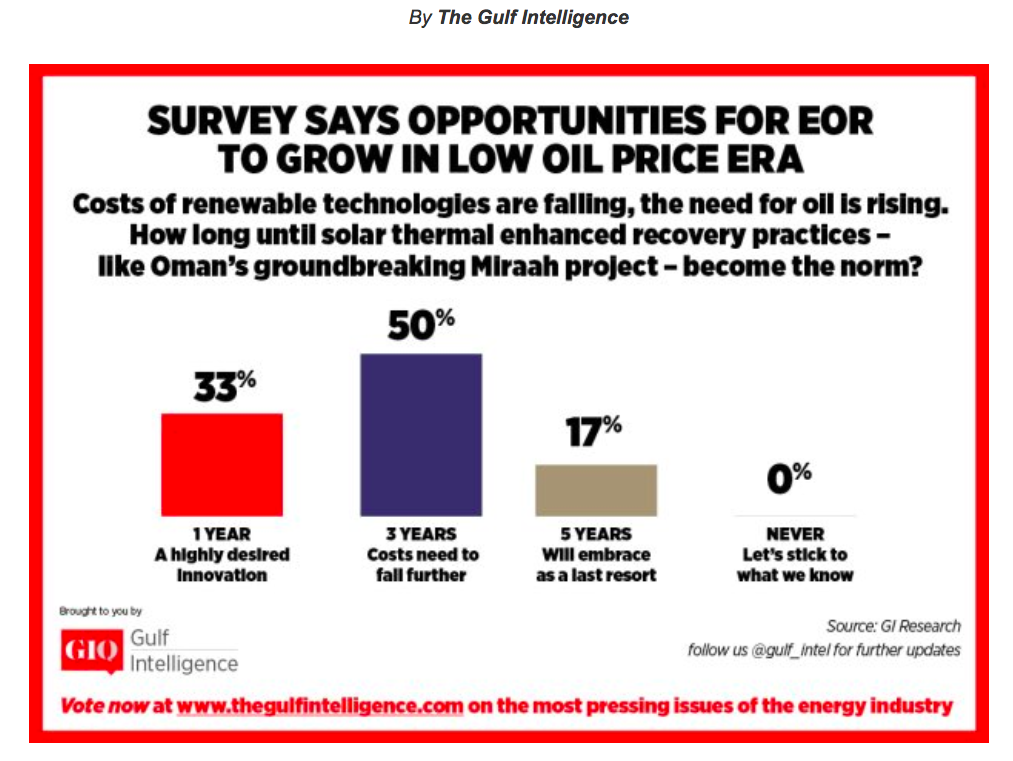 No respondents in a Gulf Intelligence Survey believe that EOR will continue to use fossil energy, and a total of 83% of Gulf region envision solar thermal steam like Glasspoint Solar’s Oman PDO Miraah and Bakersfield, California Aera solar EOR projects will be the norm for EOR within just three years

The deployment of renewable solar energy in the recovery of crude oil from difficult reservoirs will take up to three years to become a normal part of a growing toolkit of enhanced oil recovery (EOR) techniques, according to 50% of respondents in a Gulf Intelligence GIQ Industry Survey.

So far, the most common EOR method deployed today is thermal EOR. This process injects steam into the ground so that oil operators can heat the rock formations surrounding the reservoir to reduce the oil’s viscosity and facilitate extraction. To produce the steam necessary for EOR, oil companies burn enormous quantities of natural gas, which is a scarce and expensive commodity in many countries in the region.

Solar powered thermal enhanced oil recovery could evolve as a technology quicker than previously thought and become a highly desired innovation within a year, according to 33% of Survey respondents. However, 17% of those polled remain quite cynical of Solar EOR’s potential and stated it would only deployed after 5 years as a last resort.

“The GCC EOR market is forecasted to show the highest growth rate globally based on the growing number of aging oil reserves that exist across the region,” said Sean Evers, Managing Partner, Gulf Intelligence and Chairman of the Workshop. “As the era of easily accessible crude oil is coming to an end, Middle East oil and gas producers are now focusing on developing unconventional resources to maintain current production output and meet the increasing demand for energy,” he said.

The global oil and gas industry consumes an amount of energy equal to 10% of its own output in the exploration and production process, making it one of the biggest markets for renewable energy. In geographies where natural gas is scarce, like Oman, UAE, and Kuwait, burning gas for EOR means less gas for power generation, industrial development or export.

“There are a growing number of regional success stories in the use of thermal, chemical and gas EOR technologies. However, the opportunity for research, development, and deployment of new EOR technologies is very high given the continued advances we’re seeing in reservoir characterization and modeling and technology platforms that include renewable energy and advanced materials.” Said Dr. Steve Griffiths, interim Executive Vice President for Research, Khalifa University of Science and Technology.

The global EOR Market is expected to reach $140 billion by 2024, analysts reported.

The majority of the world’s daily oil production today comes from mature or maturing fields with EOR viewed as one viable solution to extracting more value. Long-term forecasts of increased energy demand in emerging economies are increasingly challenging maturing oil fields in the region – moving Gulf EOR players away from the legacy approach of working in silos towards a more collaborative one, should improve the commercial viability of realizing such initiatives.