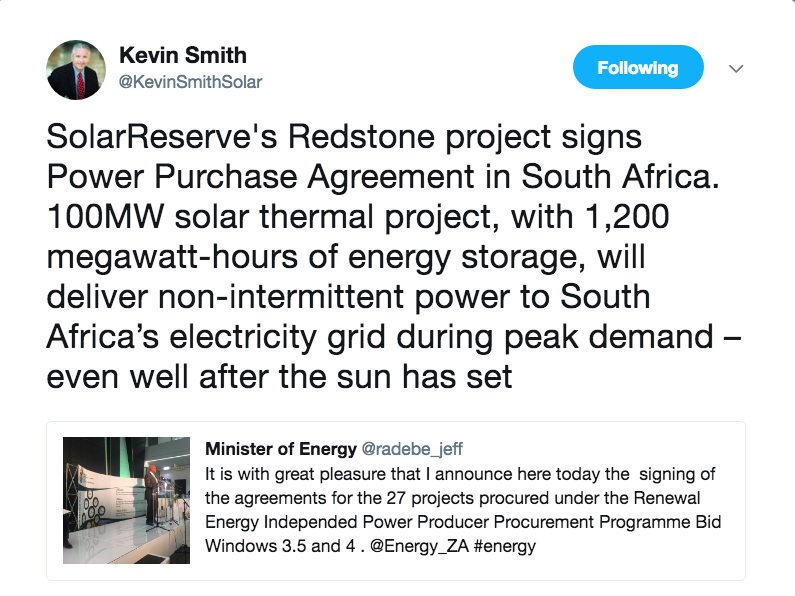 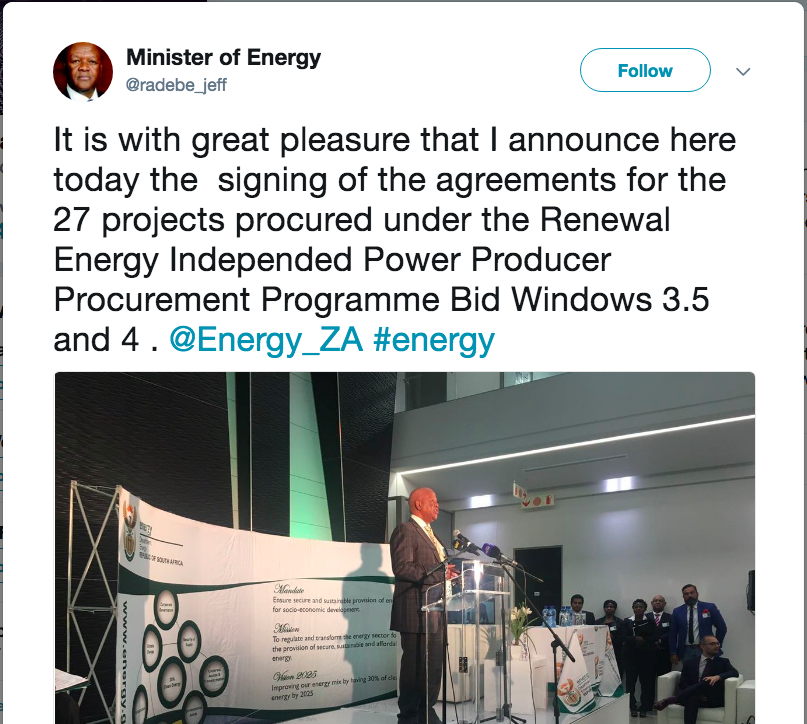 Agreements opening the way for the construction of 27 renewable-energy independent power producer (IPP) projects, with a combined investment value of R56-billion and a combined capacity of 2 300 MW, were finally signed on Wednesday April 4, after a confidence-sapping delay of over two years.

At the signing event in Pretoria Energy Minister Jeff Radebe declared a “new dawn” for renewable energy in South Africa, following a “long period of uncertainty, not only for the renewable-energy industry, but also for private sector investment in the energy sector”.

He committed to providing investors with better “line of sight” of what South Africa planned to procure in future and acknowledged that no investment decisions could be made on a “stop-start basis”. Details would be provided in a new Integrated Resource Plan, which would be released “very soon”.

Radebe described his role as one of facilitating an “enabling environment for a thriving energy sector”, while noting the National Development Plan’s target of raising the installed capacity of renewable energy to 20 000 MW by 2030.

The 27 projects signed on April 4 were identified as preferred bids all the way back in 2015, following bid windows 3.5 and 4 of the Renewable Energy Independent Power Producer Procurement Programme (REIPPPP). However, the procurement process stalled after Eskom announced, in early 2016, that it would no longer conclude power purchase agreements (PPAs) with renewable-energy IPPs, owing to its return to a generation surplus.

Following the recall of President Jacob Zuma and the appointment of Radebe, by President Cyril Ramaphosa, as the country’s newest Energy Minister it was announced that the project agreements, including the PPAs with Eskom, would be signed on March 13. But the Department of Energy (DoE) then voluntarily held back from signing after the National Union of Metalworkers of South Africa and Transform RSA approached the courts in a bid to interdict the projects, which the two organisations argued would result in coal-sector job losses.

The case was heard in the High Court on March 27 and, on March 29, the case was dismissed. Judge Dawie Fourieruled that the application was not urgent and struck the case off the roll, with costs.

Radebe said he, too, was concerned about the prospect of job losses in the coal sector, but dismissed suggestions that the renewable-energy projects had any direct role in raising the threat of such cuts. Instead, employment in the sector was threatened by fact that several mines and power stations were approaching the end of their economic lives.

The Minister also stressed that the 27 new projects would stimulate 58 000 new jobs, mostly during construction and mostly in the rural areas  of the Northern, Eastern and Western Cape provinces, as well as the North West, Free State and Mpumalanga provinces. There was potential to create a further 1 500 jobs in the manufacturing sector as a direct spin-off from the projects.

Twenty-four of the projects are either solar photovoltaic (PV) or onshore wind developments, but the list also includes the Redstone Concentrated Solar Power (CSP) project, in the Northern Cape, the Kruisvallei mini-hydro project, in the Free State, and the Ngodwana Energy biomass project, to be fuelled using waste Sappi wood chips, in Mpumalanga.

IPP Office head Karen Breytenbach said that, besides energy, the procurement process had insisted on both higher levels of domestic and black ownership, as well as socioeconomic development than projects procured in previous bid windows.

However, Radebe proposed the development of an ‘Energy Transformation Charter’ through which government and the industry could agree to specific transformation targets. “It is government’s position that South Africa cannot address inequality, poverty and unemployment without the economic empowerment of historically disadvantaged groups . . . [and] without the support of the private sector.”

SANTA MONICA, Calif.–(BUSINESS WIRE)–As part of the South African Department of Energy’s Renewable Energy Independent Power Producer Procurement Programme (REIPPPP), a consortium led by SolarReserve and International Company for Power and Water (ACWA Power) have signed a 20-year power purchase agreement with Eskom, South Africa’s public electric utility company, for the Redstone Solar Thermal Power Project. The 100-megawatt power station with 12 hours of energy storage will be able to reliably deliver a stable supply of clean electricity to the equivalent of more than 200,000 South African homes each year. The Redstone project will be located near Postmasburg in the Northern Cape Province, adjacent to the 75 MW Lesedi and 96 MW Jasper photovoltaic (PV) solar power projects successfully developed and implemented by SolarReserve.

Providing Power When It’s Needed Most

The first of its kind in Africa, the Redstone project will utilise SolarReserve’s proprietary ThermaVault™ technology – the world’s most advanced solar thermal technology with integrated molten salt energy storage, which solves the intermittency issues experienced with other renewable energy solutions and is dispatchable 24/7. SolarReserve will supply the core technology for the project, including the molten salt receiver designed and manufactured by SolarReserve, which is the heart of the power station, along with the heliostat collector field controls and tracking system.

This key technology will enable the Redstone power station to deliver 100 megawatts of non-intermittent clean energy to the South African grid, especially during peak periods – day and night. As identified under the power purchase agreement, Redstone will deliver continuous electricity to the national grid for up to 17 hours a day in order to meet peak energy demands, as a result of SolarReserve’s technology’s ability to store 1,200 megawatt-hours of energy daily. The project’s electricity price is the lowest of any solar thermal project awarded in the country to date.

“The Redstone project marks an important technology advancement for South Africa in clean, renewable power,” said SolarReserve’s CEO Kevin Smith. “Due to fully integrated thermal energy storage, the facility will provide power on-demand, just like conventional coal, oil, nuclear or natural gas-fired power plants, but without harmful emissions or hazardous materials, and without any fuel cost or foreign exchange risk. We look forward to working with our partners and stakeholders, including the communities where the project is located, to support South Africa in meeting its energy supply targets, stimulating long-term economic development, and creating new jobs and businesses.”

“The REIPPPP is a world class programme that SolarReserve and its partners and investors are committed to supporting as a long-term partner and investor,” said Alistair Jessop, SolarReserve’s Senior Vice President. “As a direct result of the programme, our operating and awarded projects in South Africa will invest over 1.3 billion Rand in economic and socio-economic development. Our projects in operation generated over 3 million man-hours during construction – Redstone will create in excess of 4,000 jobs.”

Economic and Socio-Economic Benefits for South Africa – Today and Tomorrow

The Redstone project will create more than 4,000 jobs during construction and operation phases of the project. During the construction period, in excess of 43% of capital costs will be spent on South African content. The project will have over 26% of Black Economic Empowerment (BEE) shareholding, and commits to a 2.5% community trust, further supporting the local communities. The project will expend over 700 million Rand on small to medium enterprise and socio-economic projects over the 20-year period. Tax contributions are estimated to be in excess of R7 billion in income tax over the first 20 years of operation.

Along with the Redstone project, SolarReserve has been committed to investing in South Africa since 2010, with 246 megawatts of solar capacity already installed and operating in South Africa, 650 megawatts bid into expedited round 4.5 of the REIPPPP, and a pipeline of over 2,000 megawatts. The projects in operation generated over 3 million man-hours during construction, and the three solar thermal projects SolarReserve bid into expedited bid round 4.5 could create more than 12,000 jobs. In total, the company’s operating and awarded projects in South Africa will invest over 1.3 billion Rand in economic and socio-economic development, with future round 4.5 projects investing over 1.9 billion Rand.

SolarReserve is a leading global developer, owner and operator of utility-scale solar power projects, with more than R24.4 billion of projects in operation worldwide. The company has commercialised its proprietary ThermaVault™ advanced solar thermal technology with integrated molten salt energy storage that delivers renewable energy that is dispatchable 24/7. The technology is now one of the world’s leading energy storage technologies, and allows solar energy to operate like traditional fossil-fired and nuclear electricity generation – except the fuel is the sun which means zero emissions, zero hazardous waste, and zero dependence on fuel price volatility.