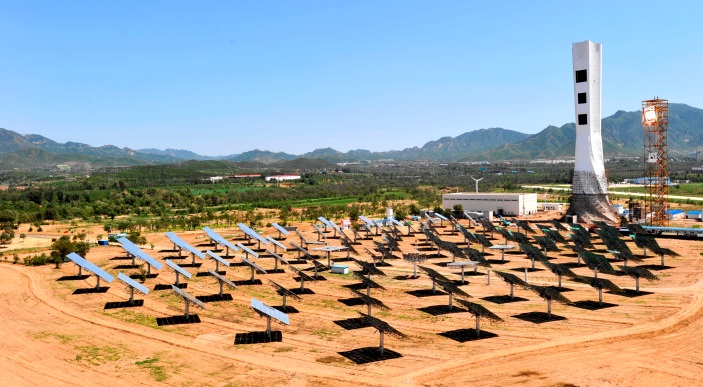 The project is composed of a series of tasks, including key technologies and components R&D, plant demonstration, infrastructure test facilities establishment, and test base initialization. The important quantizing achievement-1MWe Dahan solar tower power demo plant was put into full operation on August 9, 2012. So far, a number of innovative results have been achieved through the project, 43 invention patents in total have been submitted, with 11 patents have been authorized, and the first national standard concerning CSP- Vocabulary of Concentrating Solar Thermal Power (GB/T 26972-2011) has come into effect.

As the first solar tower power plant in Asia, Dahan tower demo plant is located in the suburb of Beijing (North Latitude 40.4″, East Longitude 115.9″), Dafutuo village, Badaling town, Yanqing county, with a total area of 53,360 m2. The heliostat field covers a land of 46,690 m2, is composed of 100 heliostats with a total aperture area 10,000m2. The receiver aperture is 5×5m, where the heat transfer fluid is heated directly up to 400℃/2.5MPa superheated steam. A two-stage storage system is used, with the thermal storage medium of conductiveoil and saturated water separately. The storage capacity is 1 hour at full load. The inlet steam to the turbine is with 390℃ and 2.35Mpa. The tower height is designed as 118 meters for the consideration of the future test for larger collector field. The nominal power of the steam turbine is 1500kW, and wet cooling is adopted. The nominal solar-electricity efficiency is 15.5%.