The 2010 SolarPACES Lifetime Award Winner Arnold Goldman passed away earlier this week. From SolarPACES we would like to express our sympathy and condolences to his family and friends. 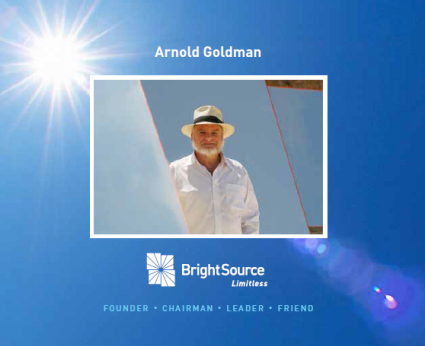 The solar industry lost a beloved innovator this week with the passing of Arnold Goldman, founder of BrightSource Energy and Luz International.

More than thirty years ago, Mr. Goldman pioneered the use of solar thermal energy as the founder of Luz International, Ltd., where he served as its CEO. Mr. Goldman and the Luz International team first proved that solar power can be reliably produced in large quantities and cost effectively by building the world’s nine largest solar thermal plants in California’s Mojave Desert between 1984 and 1990. At the time, these nine plants generated 90 percent of the world’s solar electricity, and are still operating profitably today.

Years later Mr. Goldman combined the engineering leadership from Luz International with world-class finance and development capabilities to found BrightSource Energy in 2006. As Chairman of BrightSource, Mr. Goldman shepherded the company’s advancement of solar thermal through the deployment of power tower technology. In 2008, BrightSource’s Solar Energy Development Center in Israel’s Negev Desert produced the world’s highest temperature and pressure solar thermal steam. The company’s technology has been successfully deployed at the 377 MW Ivanpah Solar Electric Generating System in California’s Mojave Desert. Ivanpah, which is currently the largest operational solar thermal facility in world, recently entered its fourth year of operations.  BrightSource’s technology is also being deployed at the 121 MW Ashalim Solar Thermal Power Station, now under construction in Israel and on track to come online by 2018. At 250 meters, the project features the largest solar thermal tower in the world, and will help Israel achieve its goal of having 10 percent of its electricity production from renewable resources by 2020.

Mr. Goldman was the recipient of four international awards for his contribution to solar energy development, including the Lifelong Contribution to Sustainable Energy Award from the Eilat-Eilot Renewable Energy Initiative, the International Solar Energy Society Achievement Through Action Award “To the Solar Energy Pioneer” (in memorial of Christopher A. Weeks), the European Solar Energy Association’s Euro Solar Augustin-Mouchot-Prize, and the Lifetime Achievement Award from SolarPACES (Solar Power and Chemical Energy Systems). He held numerous patents for his inventions and innovations. In 2009, BrightSource Energy was the recipient of the World Economic Forum’s Technology Pioneer Award in the Energy and Environment category.

When he was awarded Eilat-Eilot’s annual Lifelong Contribution to Sustainable Energy Award in 2011, Israel Kroizer, BrightSource’s executive vice president of engineering and operations, and Mr. Goldman’s close colleague and friend said at the time, “Arnold is a celebrated pioneer for parabolic trough plants, but his greatest achievement to date will be his foresight to evolve CSP to the power tower system. His incredible expertise and astute ability to foresee the future course of the industry have made Arnold a true visionary in the CSP field.”

We extend our condolences to his family and express our gratitude for his vision, leadership and lifelong contribution to the advancement of solar energy on a global scale.