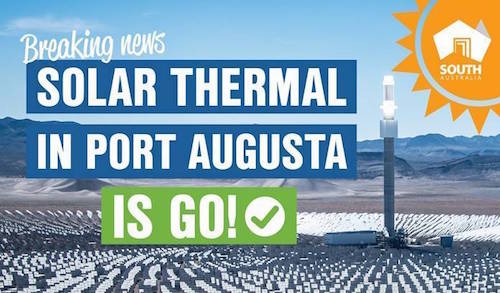 ADELAIDE, Australia–(BUSINESS WIRE)–SolarReserve has received Development Approval for its Aurora Solar Energy Project, a key milestone required to build the landmark 150 megawatt solar thermal power station 30 kilometers north of Port Augusta. The approval process examined a range of critical elements including environmental, community, and social impacts of the Aurora project, which were assessed by several South Australian Government agencies. Development Approval is a legal document which enables SolarReserve to construct the Aurora project, provided the construction complies with the submitted plans and any conditions outlined in the Development Approval.

“It’s fantastic that SolarReserve has received development approval to move forward with this world-leading project that will deliver clean, dispatchable renewable energy to supply our electrified rail, hospitals, schools and other major government buildings,” said South Australia’s Acting Energy Minister Chris Picton. “This approval triggers an investment of about $650 million, will create a total of about 700 construction and ongoing jobs in Port Augusta and will add new competition to the South Australian market, putting downward pressure on power prices.”

“This important milestone is a significant step in the development of the Aurora solar thermal power station, which will bring SolarReserve’s world-leading clean power generation technology to South Australia,” said SolarReserve’s CEO Kevin Smith. “The remarkable story of the transition of Port Augusta from coal to renewable energy – which won a competitive tender against fossil fuel – is also a preview of the future of power generation around the world.”

As part of SolarReserve’s project development process, the company collaborates with stakeholders and local communities to ensure the project has minimal environmental impact while working to maximise benefits for local communities. The Aurora Solar Energy Project has had overwhelming support from not only the Port Augusta and South Australian community but a range of local agencies and organisations including the local Barngarla Aboriginal Group. The Aurora Solar Energy Project is on schedule with final approvals expected in the first half of 2018 and construction expected to commence shortly thereafter.

The first of its kind in Australia, the Aurora Solar Energy Project will utilise SolarReserve’s world leading solar thermal technology with integrated molten salt energy storage. Aurora will generate electricity and collect and store the sun’s energy during the daytime – in essence ‘charging’ its own salt battery for use after the sun has set. The power station will provide the equivalent electricity needs of all of the State’s schools, hospitals, police stations, and government buildings over a full year.

Aurora’s massive 1,100 megawatt-hours of storage will provide 8 hours of full load power after dark. This means that, from storage (its ‘salt battery’) alone, Aurora will be capable of powering South Australia far in excess of State Government buildings, the equivalent of over 230,000 homes for 8 hours, or around 35% of all of the households in South Australia.

Because a solar thermal power station operates like a conventional coal or gas power station, many of the jobs require the same skill sets as conventional energy jobs – from its construction phase through to operations. Aurora is an example of how sustainable solutions are able to foster new industries and create new jobs for South Australia:

As part of this transformative project, SolarReserve will be establishing a research partnership with South Australian universities to advance solar thermal research and education in South Australia.

SolarReserve is a leading global developer, owner and operator of utility-scale solar power projects, with more than $1.8 billion of projects in operation worldwide. The company has commercialised its proprietary ThermaVault™ advanced solar thermal technology with integrated molten salt energy storage that delivers renewable energy that is dispatchable 24/7. The technology is now one of the world’s leading energy storage technologies, and allows solar energy to operate like traditional fossil-fired and nuclear electricity generation – except the fuel is the sun which means zero emissions, zero hazardous waste, and zero dependence on fuel price volatility.