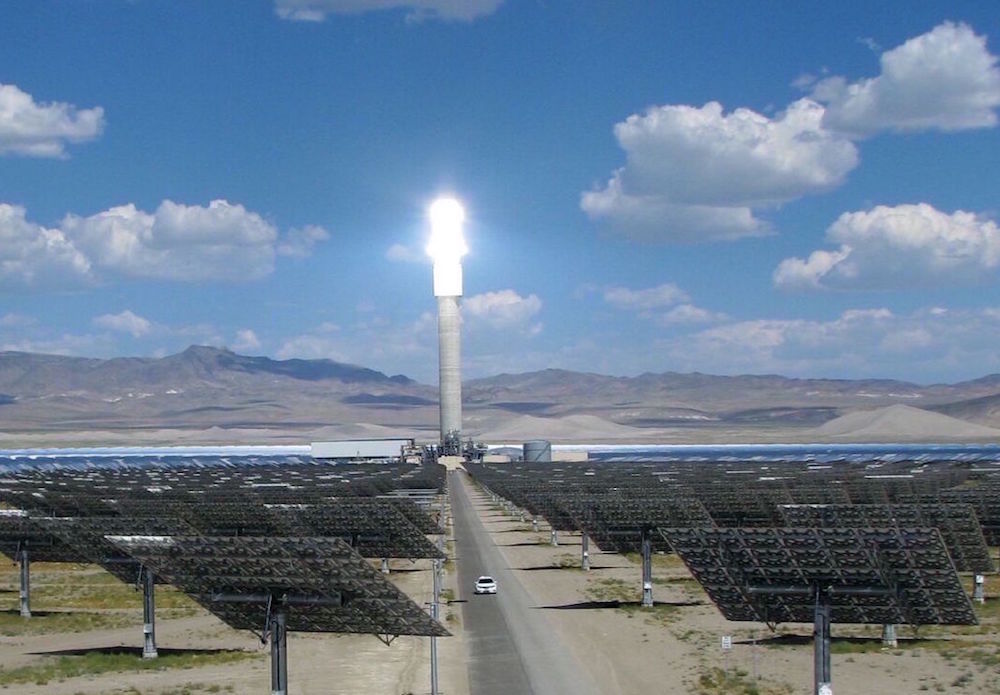 SolarReserve has broken a solar price record with its 20-year contract to supply the South Australian government with dispatchable solar at a levelized cost between $75 and $78 per megawatt hour (MWh) in Australian dollars, which itself is a world record low price for CSP.

But in US dollars, $78 AUD is just $61, or 6 cents per kWh, which was the 2020 SunShot target set during the Obama administration for CSP, the kind of solar that can be delivered when needed.

Because CSP runs a power block like a fossil fueled plant, and because it can store its solar energy thermally (See How CSP Thermal Energy Storage Works), CSP is a form of solar that can delivered on demand, day or night.

The power will be delivered from SolarReserve’s 150 MW (135 MW net) Concentrated Solar Power (CSP) Aurora project in Port Augusta that will have eight hours of solar energy storage daily to deliver into the late afternoon and evening hours to meet South Australia’s peak electricity demand periods.

SolarReserve won the bid for two tranches auctioned by the State Government of South Australia; one auction to supply at least 25% of grid needs with dispatchable renewables like CSP with thermal storage, geothermal, or PV or wind plus battery storage.

SolarReserve also won a second ‘all-resource’ tender to supply 75% of long term base load needs, with a lower price than fossil energy competitors. 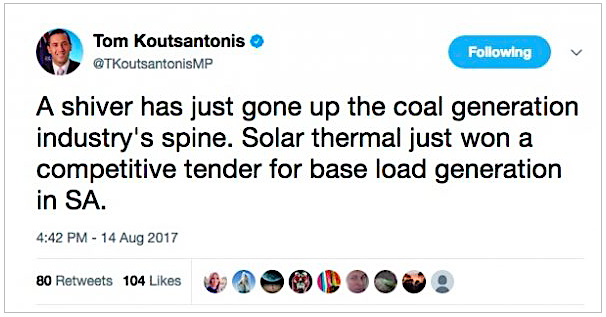 In 2015, Alinta Energy announced that it would be closing the highly-polluting 60-year old coal plant and associated coal mine in nearby Leigh Creek, as the base load power from the coal plant could no longer compete against renewables. (For why base load becomes uncompetitive in renewable-rich grids like South Australia’s wind-dominated grid, see CSP to be Essential by 2050… for Germany?)

Local activists had vigorously lobbied the government for several years to replace the Alinta Energy coal plant in Port Augusta with a thermal solar project, so the contract represents a big win for local workers. The chairman of Repower Port Augusta, Gary Rowbottom, is a 17 year veteran of the coal plant which had employed 260 local workers and closed down in May of 2016.

– 4,000 direct, indirect and induced jobs will be created during construction, with a significant portion of those created in South Australia
– 650 full-time construction jobs are expected for a duration of 30 months
– 50 full-time, permanent jobs will be required for operations and maintenance
– Equipment and services will be purchased across South Australia, which will support an entirely new industry and develop a supply chain which will be leveraged for other solar thermal projects in South Australia and the broader region 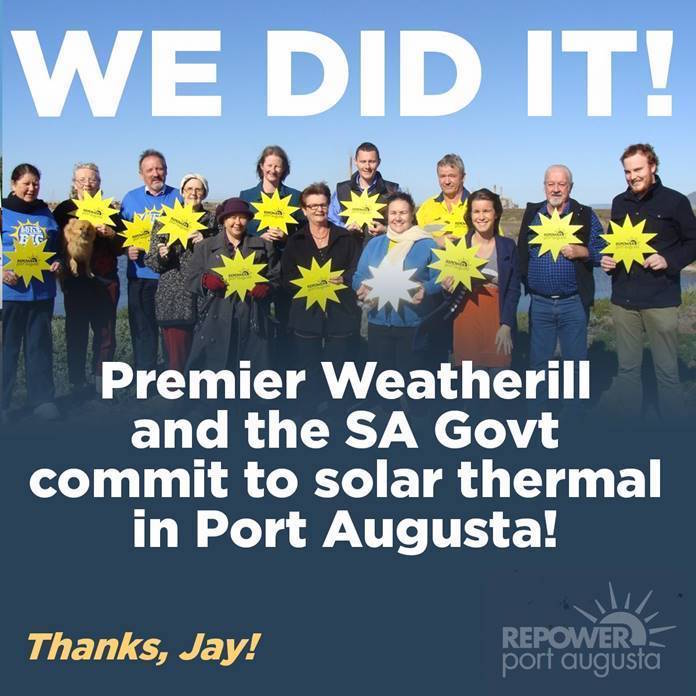 What makes the low price even more of an achievement is that relatively little dispatchable solar has been built so far. There have been fewer than 70 CSP projects (NREL) built around the world so far, and only a small fraction have included storage.The earliest CSP to include thermal energy storage (TES) was Abengoa’s Andasol CSP project in Spain. Andasol’s CSP-TES was priced at 31 cents per kWh. and began delivering power in 2008.

Only 5 gigawatts of CSP has been installed globally. To come down from 31 cents to just 6 cents in only 5 GW of global build is astonishing in itself. Typically a new technology must go through a lot more deployment to be able to cut costs by so much.

SolarReserve is a US firm based in California, and was helped by the Obama administration with a Department of Energy (DOE) loan guarantee for its initial project; Crescent Dunes in Nevada, which it bid at 13.5 cents. Crescent Dunes had a contract with Nevada Energy to deliver night solar to Las Vegas from the Tonopah desert.

The DOE Loan Guarantees came under a lot of criticism from the political right at the time, when 3 innovative manufacturers failed. But all of the new renewable energy firms that used the government guarantees to finance projects with long term power contracts have been paying back their loans and investors, according to the GAO: (“In contrast, there have been no defaults to date among the 21 energy generation, transmission, or other projects that had power purchase or offtake agreements.“)

The Federal Government of Australia is expected to take a minority equity position in the $650 million project at $110 million. So the government’s low-cost win-win financial investment in Aurora would be similar to the earlier US government support of new energy firms.

Now one of those new energy firms will be swapping old dirty energy jobs to new clean energy jobs, and has broken the record for round-the clock solar, which is a crucial technology over the long term for a safe climate future.