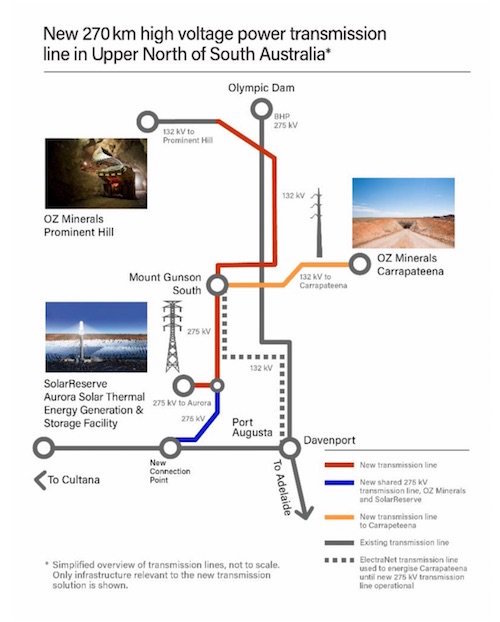 In total the line will be 270km long with Oz Minerals and SolarReserve equally sharing operational costs for the first 35km of the line, which goes as far as the Aurora project. @RenewEconomy

Oz Minerals signed a landmark deal with US-based SolarReserve, the developer of the 150MW solar tower and molten salt storage projects near Port Augusta, to share part of the cost of a new 270km high voltage transmission line.

It is believed to be the first deal of its type where costs are shared between a big energy consumer like Oz Minerals, and the developer of a major renewable energy project.

Both parties say that the new transmission line will help unlock new mining zones and new renewable energy projects. SolarReserve, for instance, has ambitions to build six solar tower and storage plants in the state.

Equally important, however, is Oz Minerals’ interest in renewables. It is looking at renewable energy options for the expansion of its Prominent Hill mine, the development of the $1 billion Carrapateena project, and the possible development of West Musgrave.

Solar, wind, and battery storage are all being considered, despite the anticipated fall in wholesale electricity prices in the state over coming years as more wind, solar and storage projects come on line.

Its first initiative will be to build a “modest” solar PV plant, with battery storage, at Prominent Hill, but its new energy plan highlights the fact that it will look at renewable energy options.

“OZ Minerals has received conditional approval for a grant from the South Australian Government to install a solar plant and storage capabilities at Prominent Hill, which is anticipated to reduce grid energy requirements,” it says.

It noted that the grant is valued at up to $2.5 million, and OZ Minerals is currently looking at optimising project plans.

“The solar plant at Prominent Hill will increase OZ Minerals’ understanding and capability with respect to renewable energy and generation sources which may be required for operations in remote locations such as West Musgrave.”

The company also says it is working with a number of potential energy developers to explore and innovate new, additional renewable options across its assets.

It indicated that solar could reduce diesel consumption and lower costs during construction of Carrapateena. It will also install a wind mast at the West Musgrave project to assess the viability of wind generation.

“The further scoping study base case identified solar photovoltaic combined with diesel as a project energy generator. The site presents opportunities for alternative renewable generation as the price point continues to reduce.”

It is also focusing on energy saving initiatives – optimising the use of its ventilation fans with smart controls – which it says could also reduce grid demand by around 15 per cent.

Oz Minerals has previously canvassed solar opportunities as far back as November, 2016, as more mining major become familiar with the opportunities of wind, solar and storage to provide cheaper power than expensive diesel.

And BHP Billiton has also expressed interest in solar and battery storage after buying into data from Lakeland solar and storage project that recently opened in far north Queensland.

Oz Minerals was forced to look at other options after being told by BHP that it could no longer use the line that currently serves the Olympic Dam mine. Presumably that is because BHP has plans to use more capacity as it expands that project.

The new line will mostly run alongside the BHP line. (See graph below).

In total the line will be 270km long with Oz Minerals and SolarReserve equally sharing operational costs for the first 35km of the line, which goes as far as the Aurora project.

ElectraNet has been engaged to provide preliminary services for the design and tender of the new transmission line solution. This preliminary work is underway with the line expected to be operational by mid-2020.

Construction of the Aurora project is expected to begin later this year, subject to confirmation of the $110 million financing promised by the federal government, and obtaining the remaining finance for the $700 million project.

Financial close is expected mid year, but the output of the Aurora plant has been reserved for the South Australia government under a contract that will see it pay around $77/MWh.

“We are excited to partner with OZ Minerals in this key initiative that brings together two private companies to develop a major piece of infrastructure for South Australia, resulting in a well-thought out project that will meet today’s needs and enable tomorrow’s opportunities,” said SolarReserve’s Chief Executive Officer Kevin Smith.

OZ Minerals CEO Andrew Cole said the new transmission line will enhance security of power supply for Prominent Hill and Carrapateena, and provide options to expand those and other projects.

“It has the capacity for additional projects to draw power or input generation, unlocking the Far North for future mining and renewable energy projects,” he said in a statement.

“We look forward to working with SolarReserve to explore additional renewable options for our other projects, such as West Musgrave.”