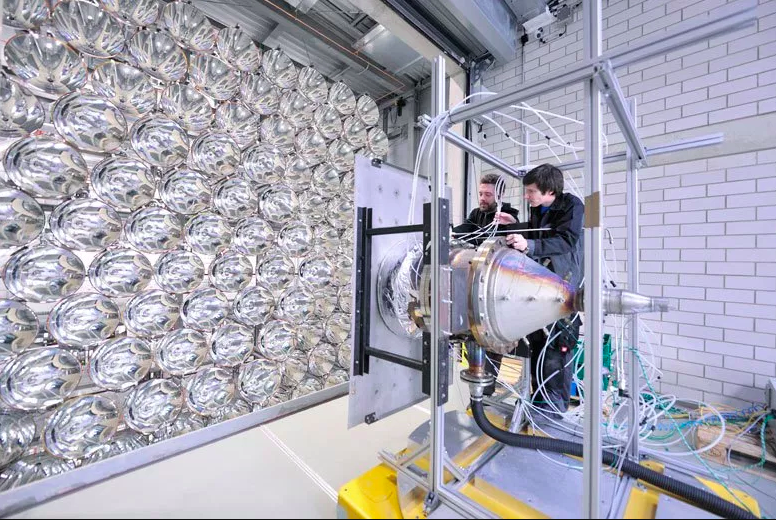 Synlight: Researchers expect that within 10 years, Concentrated Solar Power (CSP) can be used to split water to hydrogen chemically using the world’s desert sun: “Our focus is on the earth’s sun belt, whose rich solar resources are to provide value and prospects to the people living there”

Since spring, the sun has been shining in Jülich at the push of a button and 10,000 times brighter than normal. It is in this town in the German state of North Rhine-Westphalia that the German Aerospace Center, DLR, inaugurated its Synlight system comprised of 149 high-output lights that can simulate concentrated solar power.

The system is intended to simulate the effect of the very highly concentrated solar thermochemical energy needed to make solar fuels using a solar reactor or furnace and harnessing thousands of “suns” from thousands of heliostats reflecting the sun’s rays outdoors.

In the German laboratory, initially, the artificial CSP will help the researchers create solar fuels independent of disruptive changes in weather patterns inside a three-story building specifically designed for this purpose.

Their objective is to develop solar reactors that can produce hydrogen or other fuels at maximum efficiency.

What has been installed in DLR’s new building was described by Bernhard Hoffschmidt, director of the Institute of Solar Research, as: “We’re bringing that star down to earth.” To do that, the institute set up a honeycomb-shape array of 150 xenon short-arc lamps as used in movie theaters, mounting them vertically on a tall support frame. But instead of them lighting up a motion picture, their mirrored reflectors of around one meter in diameter can be used to concentrate the rays on 20 by 20 centimeters (7.87 by 7.87 inches).

This corresponds to a power concentration of around 10,000 kW/m², whereas the “original” can only provide sunlight at a maximum of 1 kW/m². Temperatures at the focal point can rise to more than 3,000 °C. Since the lamps can be controlled individually, they can be employed in as many as three different tests simultaneously, considerably shortening the time between new developments.

The high temperatures are intended to produce resources such as hydrogen in a sustainable way. Karsten Lemmer, executive board member at DLR, explained: “Solar-generated fuels offer great potential for long-term storage, the production of chemical base compounds and reductions in CO2 emissions.”

To create hydrogen, light is concentrated on a demonstration system containing a cerium oxide lattice. If steam is led into the reaction chamber, the oxygen it contains will combine with the metal at around 800 °C and will be absorbed by it, so that hydrogen is the only product left. Hoffschmidt said that the gas was “an alchemist’s dream,” as “this high-energy fuel can be used to create virtually anything.”

Johannes Remmel, North Rhine-Westphalia’s environment minister, stressed during the inauguration on March 23, 2017: “To meet renewable energy targets, we need to increase the use of mature products currently available to us. But the energy market won’t see a transformation if we don’t invest in innovative research, new technologies and global showcases such as Synlight.”

The state has supported the project with EUR 2.4 million; another EUR 1.1 million came from the economy ministry.

The most crucial advantage is a stable operation that cannot be guaranteed in a natural environment. “The light has been optimized to cover most of the sun’s spectrum,” Hoffschmidt explained. He also clarified that the lamps, whose combined output adds up to an impressive 1.5 megawatts, are only switched on for the short time it takes to conduct the relevant experiments.

Kai Wieghardt, who was greatly involved in overseeing the installation of the system, explained to H2-international: “Our calculation is 1.5 megawatts times 500 hours per year, once the system is in full use. …

To Wieghardt, power consumption is a secondary concern. He’s already thinking further ahead:

“The aim of our research activities is to advance renewable use on a global scale. Our focus is on the earth’s sun belt, whose rich solar resources are to provide value and prospects to the people living there. Based on our vision, we develop technologies and educate students and graduates. Synlight has been a unique tool for achieving these objectives and it will now be available to the global research community and industry.”

He added: “Improving the output of only one 100-megawatt solar system at 7,500 full-load hours by 0.1 percent will recoup our yearly power consumption. But, of course, we want to accomplish more than that.”

By “more,” Wieghardt means improving PV and electrolysis efficiency in H2 production from, on average, around 20 percent and 80 percent, respectively. “We hope that we can get to market-ready industrial applications in around 10 years,” he said.