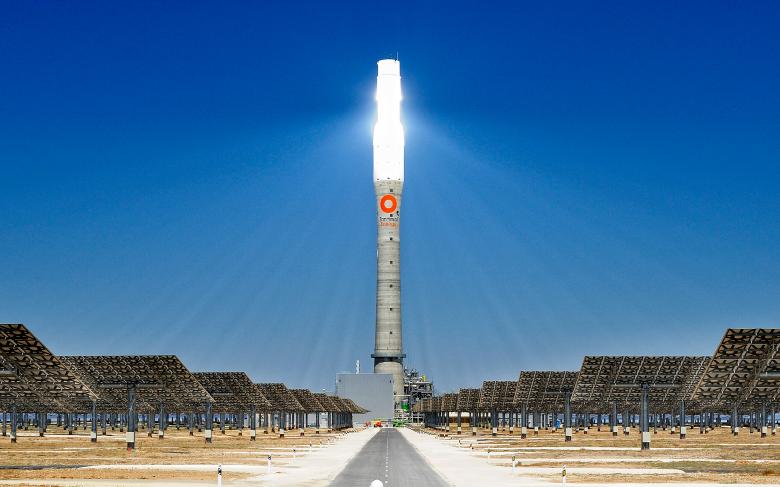 Working at the Institute of Solar Research in the German Aerospace Center (Deutsches Zentrum für Luft- und Raumfahrt: DLR), mechanical engineer Cathy Frantz and her colleagues have developed a very different shape for the solar receiver that sits atop the tower in power tower CSP that she says can cut the LCOE (Levelized Cost of Energy) of this kind of solar energy by 11 percentage points.

To bring down costs, Frantz was looking at a way to allow for increased flux density limits in a standard tower receiver. These limits are because the outside of the receiver panel is impacted by extremely highly concentrated solar flux of more than 1 MW/m² while the inside of the panel is not. This extreme temperature difference puts a limit on how much concentrated solar flux can be aimed at the exposed side.   So how to equalize the exposure to such intense solar energy between the outside and the inside? Her answer was to expose both sides:

“Because if we have two-sided irradiation, this way we might also be able to increase flux density limits. Because now we don’t have that strong temperature gradient that comes with the one-sided irradiation over the circumference of the absorber tubes,” she explained.

”Also, in today’s receivers you can only use half of the surface of the absorber area for direct heating – just the front – so there was a potential of using the other half and thus halving the necessary absorber area, even without increasing flux density.”

Why a three pointed star shape?

Today, a commercial tower receiver (see schematic image below) basically comprises a single cylindrical face made up of multiple absorber tubes of about 2” in diameter, all welded together into panels that absorb the highly concentrated sunlight reflected up off the surrounding heliostat field, in order to transfer the heat to the liquid molten salt flowing down inside the tubes.

But instead of one simple cylindrical panel of absorber tubes, Frantz proposed reshaping these absorber tubes into a three-pointed star shape, so as to be able to expose both the front and back of its three arms to solar irradiance reflected up by the mirrors surrounding the tower, getting six surfaces instead of one. This makes it possible to reduce the total receiver size, which in a 100MW tower plant can be 40% or more.

As in today’s receiver panels, the molten salt would flow up and down in a serpentine fashion inside the 50 or so tubes , so that they are resident within the focal points of the solar heating in order to achieve the desired outlet temperature. It is a sturdy design. Simulation by Frantz’s colleagues at DLR demonstrated that it could resist wind gusts of even hurricane levels of 280 km/h so they’re pretty confident the star receiver could withstand very high winds.

Even though this star design makes it possible to increase flux density, the focal points for each of the mirrors in the surrounding solar field would still need to be spread out evenly over the star’s arms, so individual aiming points on the star receiver would be set, just as for today’s receivers.

“In molten salt receivers you can’t focus all of the radiation of the heliostat field onto the center of the receiver,” she pointed out. “If you do, you reach flux densities way beyond a 2 Megawatts per square meter limit and ultimately your tubes will just melt!”
LCOE reduction is due to a smaller receiver  The thermal efficiency in molten salt receivers is already very high – in the 90 percent range – so her focus was on making the receiver cheaper while maintaining excellent performance. Thanks to the two-sided irradiation of the three arms, she is able to reduce the required number of absorber tubes of the receiver.

“Most of the LCOE reduction is due to a reduction in the cost of making the receiver because it can be smaller,” she said. “This is because using both sides cuts in half the area of absorber tubes you need. So the main idea behind the star receiver is that we could reduce the absorber surface by 60 percent compared to a comparable external receiver and because of that we saved costs.”

The remainder of the cost cut came from a one percent increase in optical efficiency. This is because the three armed star would be more efficient optically than standard receivers since the arms would tend to “catch” some reflected light spillage from neighboring arms. 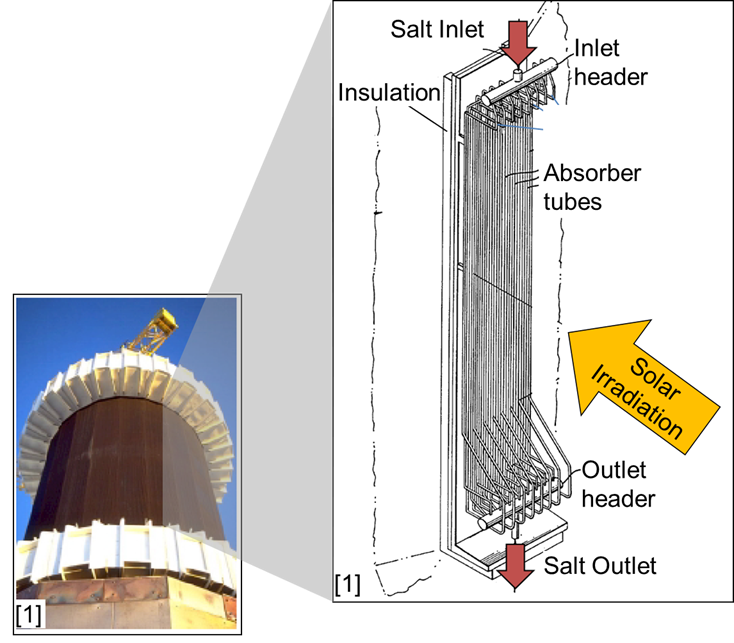 Receiver tubes in tower CSP:
How the absorber tubes in today’s molten salt receivers allow the molten salts (a watery liquid at these temperatures) to flow in a Serpentine fashion down and up and down to maximize the time spent getting heated by the reflected solar energy from the solar field of mirrors. In the Star receiver, instead of insulating the back as shown here, these absorber tubes would be on both sides of its three arms IMAGE@DLR/Cathy Frantz

“Most efficiency losses are due to reflection in a today’s receiver,” Frantz noted. “Of the incident solar radiation roughly five to seven percent is just reflected back to the surroundings and this radiation is lost, because it can’t be absorbed anywhere else. But in our star receiver we create a cavity because of these three-sided sections that partly face each other, so a solar ray comes in and if it is reflected there is a chance it will be absorbed by one of the others. So we gain roughly one percent of optical efficiency.”

Three is the just-right number to facilitate cost reduction

Frantz pointed out that others have also investigated a multi-arm receiver design. There have been approaches in radiated panels to improve efficiency, by adding more segments, and in that way increasing optical efficiency. What she found is that there are diminishing returns to adding more arms to the star, that increasing the efficiency of a receiver will not outweigh the benefits of a cheaper receiver.

“If you keep an constant absorber surface, hence a given mean solar flux density for a given thermal rating of the receiver, the more arms you add, the tinier and more unforgiving the resulting aiming points become. And then it becomes harder to target from each heliostat’s point of view. If I add five or six or seven arms now my receiver shrinks and shrinks, and optically speaking the total aperture of the receiver becomes smaller,” she explained.

“The main drivers that I see for the star receiver are that it should be efficient – of course we shouldn’t have a bad efficiency. But also it should be a really big target, so your heliostat field can still aim at it without having high spillage losses – and then finally, it should be really cheap. And I think those three goals are best achieved by a star receiver with three arms. It is a concept that is radical but that can bring down costs substantially.”

Having proven the concept, the next step will be to build a prototype at DLR’s Jülich testing site, possibly at a 1 MW scale, to demonstrate the functionality of the star receiver.