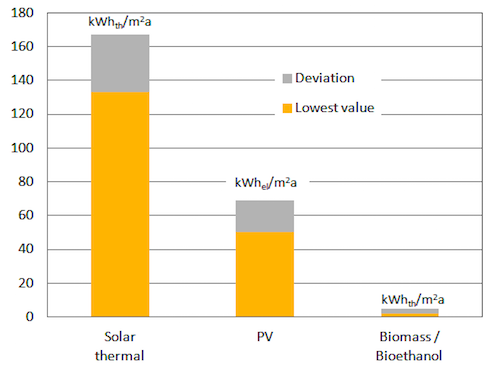 A Fraunhofer study comparing annual energy yields per square meter has found that solar thermal collectors will produce on average about three times as many kilowatt hours from the same amount of space as photovoltaic solar.

The study was conducted by Florian Dallhammer and Christoph Kost from the Fraunhofer Institute for Solar Energy Systems, Germany, Jan-Olof Dalenbäck from Chalmers University of Technology, Sweden, and Per Alex Sørensen from Danish consultancy PlanEnergi.

Comparing energy yield (in Denmark with solar irradiance of only 400 and 500 kWh/m²) the study’s authors found that a plot sized at 3 m² yielded annual solar thermal results up to 167 kWh/m²a.