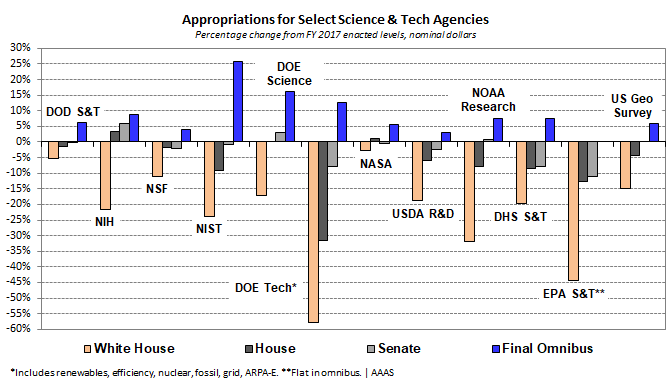 The American Recovery and Reinvestment Act (ARRA), signed into law by US Democrats in response to the international financial meltdown of 2008, offered the biggest boost for renewables since President Carter first funded solar research in the ’70s.

Today, in a repudiation of funding slashes sought by both the majority Republican Party and his own administration, President Trump signed the biggest increase in research spending since ARRA, according to the American Association for the Advancement of Science (AAAS). After first threatening a veto (the budget lacked funding to build a wall between the US and Mexico) the much-delayed 2018 budget was signed into law. Included is an increase an increase for EERE (Energy Efficiency and Renewable Energy) of 11%, and an increase in ARPA-E funding of 15.5%.

The long-awaited omnibus spending measure released by Congress last night — halfway through the fiscal year — would deliver several major funding increases for federal science and technology programs in FY 2018, with the National Institutes of Health (NIH) and the Department of Energy (DOE) faring particularly well, as seen in the graph at right. According to AAAS estimates, total federal R&D spending would reach its highest point ever in inflation-adjusted dollars. Basic and applied research funding would receive its largest year-over-year increase since the FY 2009 Recovery Act.

Beyond NIH and DOE, several other agencies and programs in both the defense and civilian spheres would also receive at least moderate increases, while climate research programs were protected from the steep cuts recommended by the Trump Administration last year. Notably, the agreement also contains language to enable federal agencies to move forward with research on the causes of gun violence.

These boosts were enabled by last month’s budget deal, which substantially raised the discretionary spending caps in FY 2018 and FY 2019 and paved the way for additional spending. Typically, when discretionary spending is increased, research funding moves along with it, and this year’s omnibus proves no exception.

AAAS currently estimates R&D spending in the FY 2018 omnibus at $176.8 billion, an increase of 12.8 percent or $20.1 billion above FY 2017 estimated R&D. This includes a total increase for basic and applied research of 10.7 percent or $8.1 billion above FY 2017 (see graph at right and table below). Total research funding (excluding development and R&D facilities) would rise to an estimated $83.2 billion, representing an all-time high in inflation-adjusted dollars.

As a share of U.S. gross domestic product, federal research expenditures would reach 0.42 percent, the highest point since before sequestration was enacted.

As mentioned above, funding increases this large have not been seen since Congress adopted the Recovery Act, enacted as a one-time stimulus during the financial crisis. That legislation included over $18 billion for R&D in nominal dollars, with about half for NIH research (see Recovery Act spending broken out here). That single piece of legislation meant a one-time research increase of over 25 percent in 2009.

But the Recovery Act was a special case, enacted amid economic crisis. What about “regular” appropriations adopted through annual spending bills, such as those packaged in the omnibus? For that comparison, one must go all the way back to FY 2001 to find a more generous year. That year, in the middle of the NIH budget doubling effort, basic and applied research were increased by a whopping 14.1 percent. That means that, in relative terms, the FY 2018 omnibus appears to be the most generous regular appropriations bill in 17 years for research.

Department of Energy. Within the Office of Science, every research program would receive an increase of at least 10 percent, with particular boosts for advanced computing and fusion energy research. U.S. contributions to the international ITER fusion project would more than double to $122 million. On the technology front, ARPA-E was saved from elimination. DOE’s Energy Innovation Hubs, Energy Frontier Research Centers, and public-private manufacturing innovation institutes were all preserved.

National Science Foundation. The core Research & Related Activities accounted would be boosted by $301 million or 5 percent. Appropriators noted that “this strong investment in basic research reflects the Congress’ growing concern that China and other competitors are outpacing the United States in terms of research spending.” The omnibus also provides funding for the construction of three oceanographic research vessels, as requested by the Senate. NSF’s Education Directorate would see a modest 2.5 percent plus-up.

NASA is slated for a $1.1 billion boost above FY 2017 enacted. In the end, Congress rejected the Administration’s proposed elimination of several earth science missions, including OCO-3, CLARREO-Pathfinder, and DSCOVR; overall Earth Science funding would remain flat. Meanwhile, Planetary Science was given a substantial $382 million or 20.7 percent boost. Congress granted $595 million for the Europa mission to Jupiter, including both the clipper and lander components requested by the House. Both the Space Launch System (SLS) and Orion Crew Vehicle would remain equal to FY 2017 enacted levels. NASA’s Education Directorate would escape the President’s proposed termination.

NOAA. Within the agency’s principal research arm, the Office of Oceanic and Atmospheric Research (OAR), climate research would be flat-funded, as opposed to the House and Administration’s recommended cuts. Additionally, the omnibus includes $419 million for the Polar Follow-on mission, which was subject to deep funding reductions under last year’s request.

U.S. Geological Survey. The omnibus preserves funding for the agency’s eight climate science centers; the White House had proposed cutting their number in half to four. Congress also maintains funding for the continued development of the earthquake and volcano early warning systems, both of which the Administration had slated for elimination.