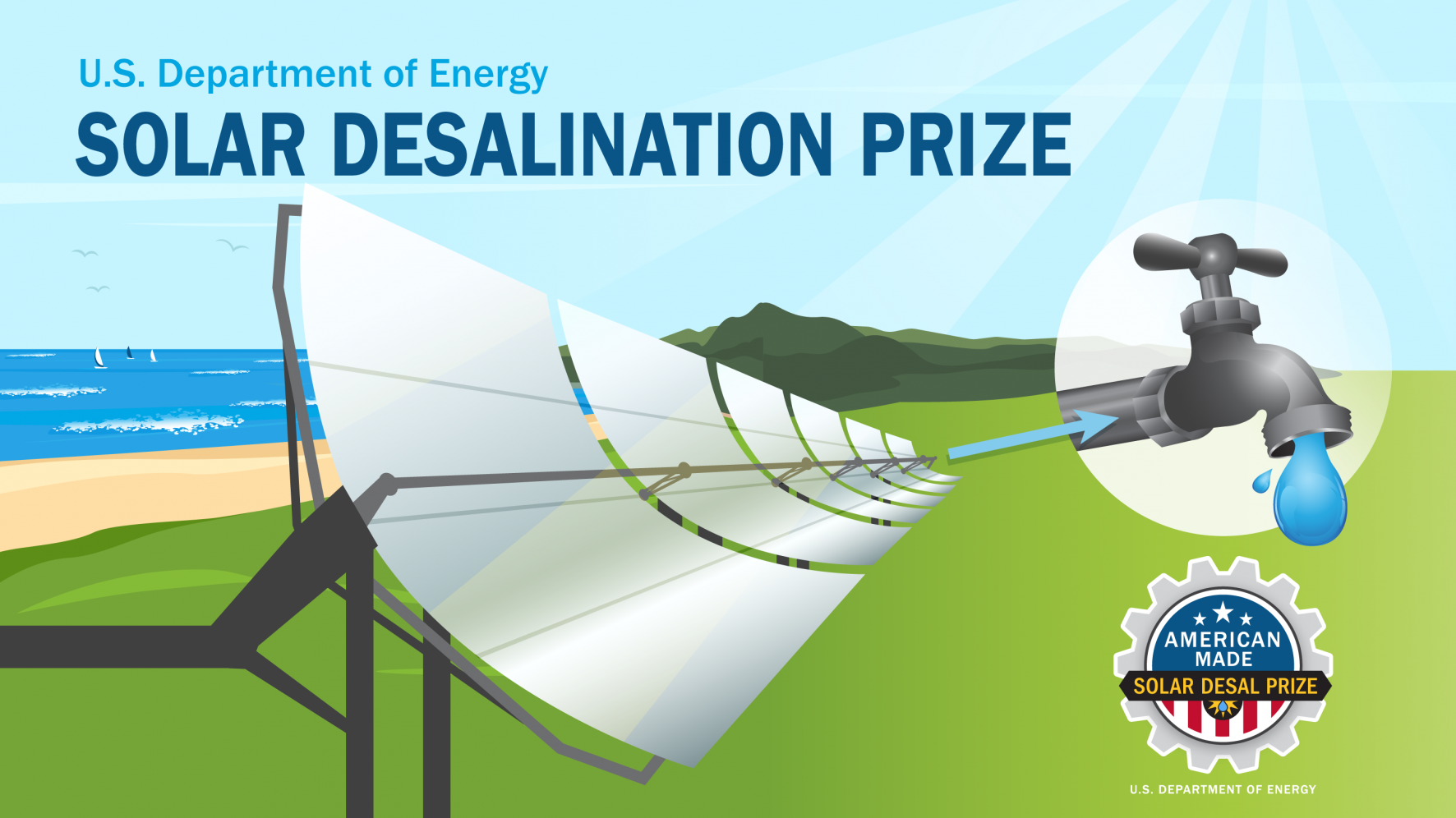 The American-Made Challenges: Solar Desalination Prize is a four-stage, $9 million prize competition, providing an additional $1 million in support, designed to accelerate the development of low-cost desalination systems that use solar-thermal power to produce clean water from salt water. Competitors will receive cash prizes as they advance through each stage of the competition, culminating in a $1 million grand prize for the successful testing and demonstration of a promising solar-thermal desalination system prototype.

The prize was announced September 23, 2019, and launched April 28, 2020. Participants may enter the competition as individuals or teams, but all competitors who advance beyond the first stage must form teams. Competitors may include private companies, nonprofit organizations, academic institutions, students, and researchers at National Laboratories.

The teams selected to advance to the third phase will receive $250,000 in cash and a $100,000 voucher that can be redeemed at a National Laboratory and/or qualified partner facilities to design their systems. While they’re completing detailed designs of their systems in the third phase, teams must also obtain the permitting and approval documentation necessary to build them.

Teams selected to advance to the fourth and final phase of the competition will be awarded a cash prize of $750,000 and another $100,000 voucher. These teams will then build their systems, demonstrate their operation, and validate key performance metrics. The U.S. Department of Energy will determine the winner, who will receive a $1 million cash prize.

Competitors can leverage industry expertise, access private capital, and obtain mentorship and support through the American-Made Network, a group of National Laboratories, incubators, investors, and industry experts. The Network also provides access to local capabilities that will help accelerate the development of their desalination system prototypes.

Out of 162 applicants, 19 quarterfinalists from 12 states were selected to advance to the second phase of the competition. They were announced on October 19, 2020. They are:

Solar Thermal Enhanced Evaporation
Location: Minneapolis, MN
Project Summary: Researchers from the University of Minnesota propose a humidification-dehumidification desalination system that will handle small-volume brine from industrial facilities that do work such as electroplating, which coats metal onto surfaces, dyeing, and mining. This project will use large fans, evaporators, and heat-pump-driven condensation systems to manage brine mixed with industrial metals. The team plans to industrially source forced-flow evaporators and fans to attain a levelized cost of water no higher than $1/m3.

NoAir: Super-Vacuum Gap NanoMembrane Distillation
Location: Gainesville, FL
Project Summary: This team, led by the small company Focused Sun, proposes a linear Fresnel solar-collector system that will generate steam for a process called thermal vapor compression (TVC) to provide pumping power for the system. The brine will be preheated by a membrane desalination (MD) system, which is then fed with brine from the TVC system to further desalt and recover water. This MD-TVC system could attain high energy efficiency at low pressure and be used to treat water produced from oil and gas extraction, with no electricity input.

TSSE Desalination of Hypersaline Brines
Location: Santa Barbara, CA
Project Summary: A Columbia University–led team proposes a desalination technique using a solvent that, when heated, attracts brine in high-salinity water, separating it from fresh water. Increasing the temperature of the feedwater will cause the clean water to float above the solvent, enabling reuse of the solvent in subsequent cycles. This method has the potential to be highly thermally efficient because it does not require evaporation and condensation, unlike in conventional desalination systems

Sorption-Based ZLD Technology
Location: Houghton, MI
Project Summary: A team of researchers from Oak Ridge National Laboratory, Michigan Technological University, and the company Artic Solar proposes to add an adsorption-desorption system to a multiple-effect desalination system (MED) to achieve zero liquid discharge (ZLD). They have identified a liquid that could extract all the water-vapor volume from the brine slurry of a MED system, thus enabling an energy-efficient, modular ZLD treatment

Portable Treatment of Oil/Gas Wastewater with ZLD
Location: Corvallis, OR
Project Summary: A team of researchers from Oregon State University and Michigan State University plans to advance a humidification-dehumidification process that can recover clean water from water produced by oil and gas extraction. A novel cyclone separator, which can be easily designed at small scale for portability, separates salt from humid air and enables the process. By separating humid air from solid salt particles, this technology could be a cost-effective method to achieve zero-liquid discharge (ZLD). The team intends to demonstrate their system with real produced-water brines integrated with solar-thermal energy and scaled up to 250 kilograms per hour.

Modular Inexpensive Solar-Thermal Evaporative Desal
Location: Andover, MA
Project Summary: Physical Sciences, Inc. proposes to integrate a low-concentration solar receiver with a multistage flash evaporator in one device to reduce capital cost. The evaporator efficiently distills water by combining numerous distillation stages so that each one uses the heat output from the previous stage. The evaporator operates at low temperature, which allows the use of low-cost cylindrical optics. The team intends to build a 20-stage multistage flash device inside a cylindrical tube receiver to produce 100 m3/day of desalinated water.

Solar Aqua Flex: Off-Grid Solar Still
Location: Nashville, TN
Project Summary: This team, led by researchers from Vanderbilt University, will develop a multistage membrane distillation system made of floating, flexible, layered “mats” to desalinate water. The mat has a nonporous, heat-absorbing top layer; a water layer that evaporates; a distillate layer where the  vapor ends up after moving through a membrane to condense; a feedwater layer; and a conductive layer that heats the feedwater. This concept has the potential to be modular and portable, with higher production than similar existing systems.

Brine Concentration with Managed Salt Precipitates
Location: Hopewell, NJ
Project Summary: This team, led by AIL Research, has proposed a membrane desalination system capable of handling very-high-salinity water and using recovered heat to preheat the brine feed. The membrane will not have to be corrosion-resistant because readily precipitating ions, such as magnesium and calcium, can supersaturate and crystallize in a brine tank above the membrane. Managing the precipitation of salt and using recovered heat allows more water recovery from high-salinity brines.

Urban Solar-Desal Building
Location: College Park, MD
Project Summary: A team led by the University of Maryland’s Center for Energy Environmental Engineering will develop a vertical, building-integrated desalination system for urban areas. Solar-thermal collectors will be the energy source to heat multistage vacuum membranes in the system. This concept has the potential to decentralize desalination at the point of use.

Switchable Solvent Water Extraction from Brine
Location: Rohnert Park, CA
Project Summary: A team including researchers from Idaho National Laboratory and Trevi Systems is developing a solar-thermal-powered liquid/liquid extraction process that removes “hard” ions, like calcium and magnesium, in brine fed to reverse osmosis, a conventional desalination process. This method could improve the efficiency of reverse osmosis by allowing the process to operate over wider brine input conditions and requiring less maintenance to remove the scale caused by hard ions.

X-VAP: Self-Contained Distillation
Location: Houston, TX
Project Summary: Katz Water Technologies is redesigning its self-contained, compact distillation system to use solar-thermal energy instead of natural gas. The system distills and separates purified water in a closed-loop heat exchanger. The technology has the potential to be a modular, portable system that can supply fresh water where needed.

100% Solar Transcritical Water Desalination
Location: Pittsburgh, PA
Project Summary: Epiphany Solar Water Systems has developed a water desalination and crystallizer unit that uses solar-thermal energy to desalinate water by increasing the temperature and pressure sufficiently to cause water to transition to a supercritical phase, in which salt does not dissolve. The fully integrated system will use solar collectors to provide heat, heat recovery from the supercritical water distillate to improve efficiency, and crystallizers to separate salts from the distillate. This technology has the potential to be more thermally efficient than conventional distillation techniques.

The Solar Desalination Prize is administered by the National Renewable Energy Laboratory and is part of the American-Made Challenges.