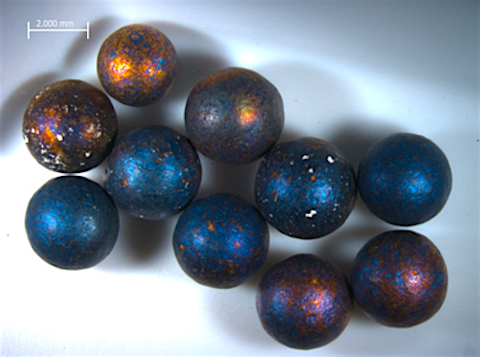 The US Department of Energy (DOE) has released funding to the Argonne National Laboratory for a scaled-up round of independent testing of Terrafore Technologies’ innovative encapsulated thermal energy storage in phase change salts, designed to operate in temperatures to greater than 800°C in a single tank that acts as both storage and heat exchanger.

Argonne scientists approached CEO Anoop Mathur to submit an application when they heard of the potential awards under the SBV program.

“Earlier, at Southwest Research Institute we proved the reliability of capsules with salt melting at 370°C. Argonne tests will be showing the reliability of our capsules; that the special coating on these salt capsules will be able to withstand those temperatures and high pressure, using a test rig at the lab,” said Mathur.

“The capsules for high temperature are ready-to-scale and we expect the thermal storage using these will enable distributed scale CSP like mini-towers and dish collectors as well as next-generation CSP using Supercritical CO2,” he added.

The funding is one of 38 awards that had been funded by the outgoing Obama administration to support startup innovation through the “valley of death” phase of advanced innovative technologies. The results are expected by mid 2018.

Mathur designed the encapsulated salt capsules – what he now calls TerraCaps – to eliminate the need for the two tanks used in today’s sensible heat thermal energy storage systems, the hot and the cold tank. The idea is to be able to store 50% more energy per unit volume than the two tank molten salt thermal storage system used in current CSP projects.

The key to being able to heat and cool in a single tank operation is a space inside each marble-like capsule for salt to expand when it melts. 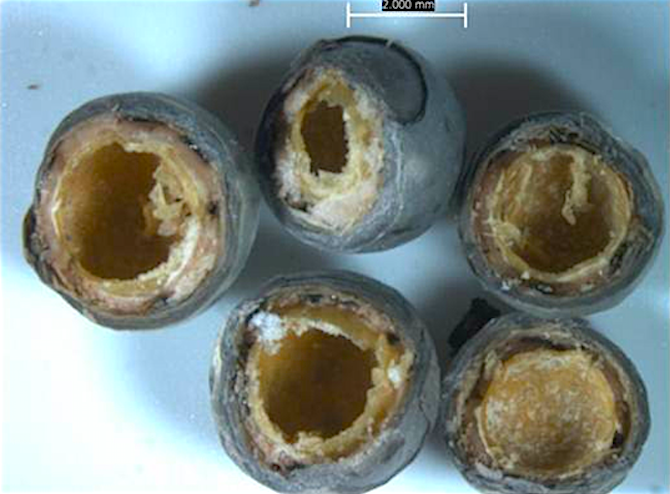 Mathur pointed out that some of the salts expand as much as 25%. Also, since salts have low thermal conductivity, they are not efficient at transferring heat and require a large heat transfer area; so encapsulating the salts in small capsules results in a large specific surface area that helps maintain the high heat transfer rate needed for power generation.

How the space inside each capsule is created

The void is made in an interesting way. Mathur invented a novel new ‘sacrificial’ method to make a void in capsules – that are almost less than an inch in diameter. Sodium chloride will be used as the single salt for this particular test. The salt gets a coating of a polymer that becomes a gas at high temperatures. The polymer-coated salt is then encapsulated in clay, with a nickel outer coat applied “cool” using vapor deposition – to seal pores in the clay till heated. For higher temperature applications special composite coatings are used. 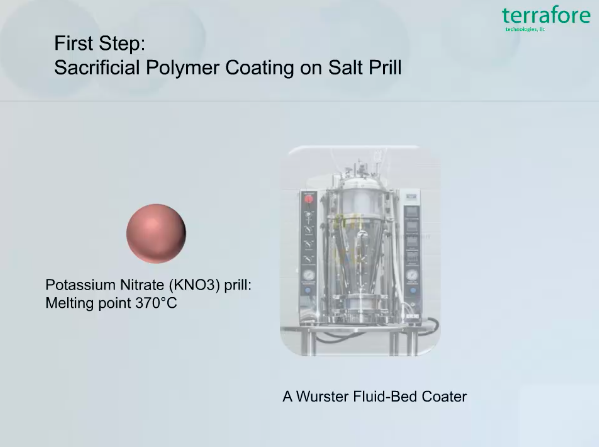 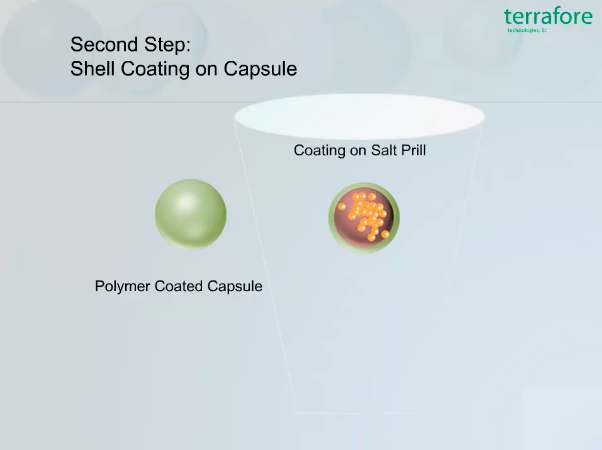 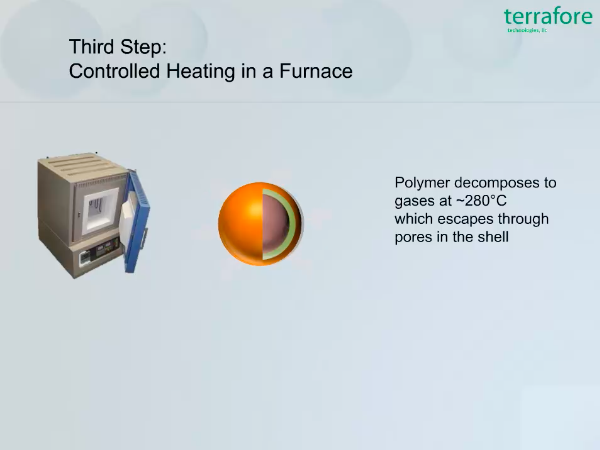 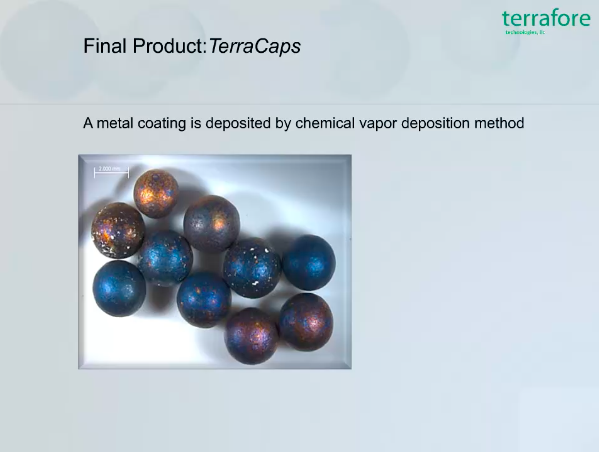 These explanatory videos are at the Terrafore Technology site:

Exposed to heat, the polymer now escapes through the pores in the shell, leaving a void space inside, so the salt can expand and contract as it is heated and cooled. Finally a special coating is applied to capsules to seal the pores in clay and make them robust.

The Argonne test moves the process towards the mass production it requires for commercialization.

“Right now we have proven the technology and it is ready to scale,” he said of his void technique. “This has not been done before by anybody. Many researchers have tried and are still trying to increase the energy density of storage by using the phase change in salts. And many companies have tried using phase change but they encountered the problem with heat exchangers and heat transfer.”

To recover the heat, the flow direction is reversed. So the single tank replaces the two tanks system and the heat exchanger, cutting costs and increasing efficiency.

So one way the innovation cuts the costs is that it eliminates the need for a second tank and the separate heat exchanger.

The other way costs are cut – and efficiency is increased – is that encapsulating the phase-changing inorganic salt mixtures increases the heat transfer area, because the surface area per unit of salt is raised.“Using three salts, over 93% of the phase change heat can be effectively used for storage while delivering a constant temperature to the power generator,” said Mathur.

Argonne test rig will use hot gas like Supercritical CO2

For this test at Argonne, hot air, not steam, will be used for the heat source, and only one salt will be used; sodium chloride (table salt) or magnesium chloride. Stirling Engine and Brayton cycle systems run on air and / or helium at temperatures around 800 C° and higher, much hotter than today’s commercial CSP.

”The advantage to using hot air is that if it works, it should also work with Supercritical CO2 which is a gas – like air – but the difference is the pressure,” said Mathur. “These coatings are hard enough to resist this external force, and they should also be able to handle the high pressure of Supercritical CO2.”

A Stirling comeback as small off-grid for Africa and India?

Stirling Engine and Brayton Cycle CSP is not the mainstream choice for utility-scale projects; which are now either power tower for efficiency, or parabolic trough for bankability.

But arguably, Stirling Engine dish collector CSP or Brayton cycle mini-towers could be lower cost, with a conversion efficiency of up to 32% of incoming solar power to electricity. Like PV, it can be distributed and modular, and cost-effective at a smaller scale. The drawback is, that unlike power tower or parabolic trough CSP, there is no viable, cost-effective way to store energy thermally.

Adding a compact and lighter weight single tank storage like Terrafore innovated could change that.

Like PV, the Stirling Engine makes electricity directly and is very modular and can be at small scale, making it suitable for a rural off-grid application as small as 15 kW with a correspondingly low investment threshold before you see if it works. And adding a cost-effective single tank storage makes it dispatchable solar.

So the market that Mathur’s research would be relevant for would be small efficient modular off-grid systems for islands and rural areas, as well as  on-grid being explored by companies such as Cleanergy, 247Solar and Ripasso Energy.

These tests using the highest temperatures will be applicable in this new round of smaller CSP Stirling Engine CSP systems for these off-grid applications.

“We have successfully encapsulated salts melting from 370°C to 800°C and higher,” said Mathur.

But the innovative voided capsule system is not limited to systems running on hot gases like Supercritical CO2 systems or Stirling Engines. Mathur said that a typical power tower using molten salt storage could also increase its efficiency and reduce cost by moving to this single tank thermal storage enabled by using his encapsulated ceramics, as could parabolic trough CSP.

“The process we have will work for encapsulating many salts,” he explained. “Salts that melt at around 650°C can be useful for next generation CSP using Supercritical CO2. Lower-melting salts are good for the current utility-scale power tower or parabolic trough CSP, and the single tank system could replace the two-tank molten salt or oil storage.” 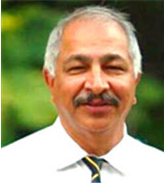 Anoop Mathur (Founder, CTO, inventor of the technology) has over 35 years industrial experience, developing and directing advanced technologies while at Honeywell. He directed global advanced technology Laboratory with over 80 technologists in USA, India, China, & Romania, has managed large programs for Government agencies and Fortune 500 companies, is the recipient of several technology excellence awards including the H.W. Sweatt Award, Honeywell’s highest award for technology and business excellence. He holds over 25 patents. He has a Masters in Chemical Engineering from University of Minnesota, an executive MBA from Carlson School of Management, MN.  https://www.linkedin.com/in/anoopmathur/