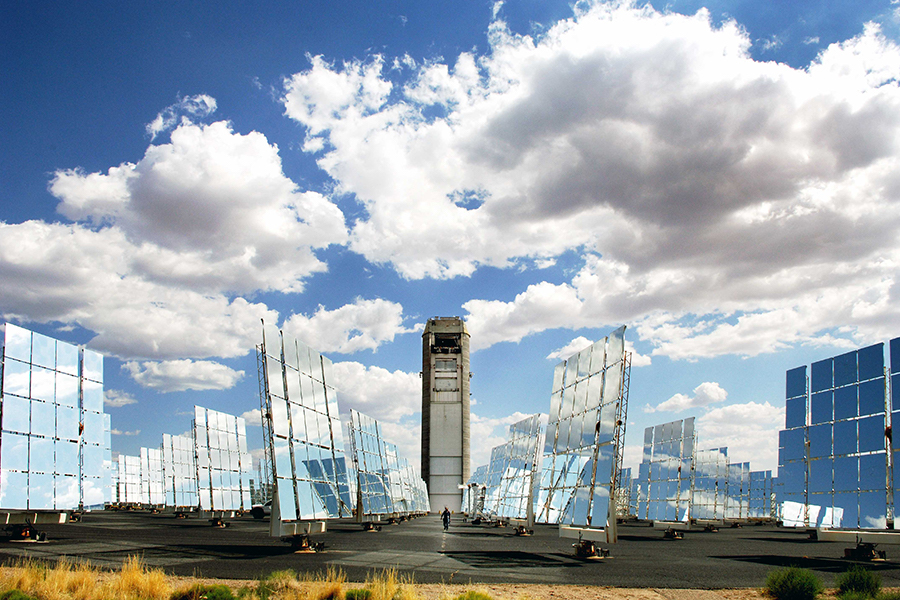 Here are the innovation details of just how three pathways that the US is funding aim to cut costs of solar thermal energy technologies that can provide night solar power.

To cut costs of Concentrating Solar Power (CSP), the US Department of Energy (DOE) announced $72 million in funding novel pathways aimed at raising temperature and efficiency of three competing solar thermal energy technologies over the next five years.

The three technology pathways, comprising solid (particles), liquid (new molten salts), and a gas (supercritical carbon dioxide (sCO2)), will compete over the next two years to create the technology to go on to build, over an additional three years, a full-scale test facility coupled to a highly efficient sCO2 power cycle.   By replacing today’s 600°C steam cycle in the power block with an sCO2 power cycle operating at 700°C-750°C, the DOE projects gains in efficiency to lower cost.

“We will be testing at a much larger scale than has been tested at these temperatures,” said Avi Shultz, acting program manager for the Solar Energy Technologies Office CSP team.

Shultz said that the size of relevant components that have been trialled in previous awards will be increased by an order of magnitude over previous research that the DOE has funded for innovation in tower CSP in all three pathways.

Solar tower CSP plants currently deliver their heat to a steam turbine power cycle. But over a century of incremental improvements, steam cycles have seen only incremental efficiency increases, around 1% at a time, and now max out at 600°C for around 40% efficiency.

So instead, after extracting the heat from a heat exchanger, in all three cases, each awardee will be required to innovate a way to transfer their solar heat to an sCO2 closed loop power cycle which operates at around 700°C-750°C with the potential to raise thermal power cycle efficiency by 10 percentage points, to over 50% net thermal-to-electric.

The sCO2 power cycle is experimental technology that has been developed under a succession of DOE competitive awards. Shultz said its 10-point efficiency gain and small size could lead to a 20%-30% drop in the levelized cost of electricity for CSP.

Each of the three competing pathways, solid, liquid or “gas” (sCO2 at this temperature and pressure is actually more of a liquid), must overcome their risks during the first two-year award. The technology that succeeds then gets to demonstrate their complete CSP system with an sCO2 power cycle – that also must be innovated within this time frame – over the next 3 years.

There are technical challenges for each pathway:

Sandia has focused on particle technology for some time, and they will scale up and integrate the components they’ve been researching.

Even experimentally, particle receivers can operate at higher temperatures, up to 1,000°C. In a King Saud University collaboration with Sandia, a particle receiver solar tower is aiming to come online in Saudi Arabia in 2018.

The ability to over-achieve the targeted temperature gives particle technology the advantage of wriggle room: “One of the attractions of particles is you can be a little less accurate in the irradiation of the particles because you are not worried as much about hitting some material stability temperature,” said Shultz.

“But the ultimate “customer” for the heat in the power plant is the power cycle that will turn the heat into electricity, and for this SCO2 cycle, the approximate optimum temperature, when you weigh off cost for efficiency, is at about 700 C,” he explained. “When you start to go much higher you don’t get a lot of return in efficiency.”

Another advantage of particles is simplicity. The Sandia team identified early on that the sand used in fracking has an application in receiving and storing solar heat for CSP. So it’s a very well understood, very inexpensive material, already produced at a very high volume. It’s relatively straightforward to store hot particles and dispatch the heat on demand.

But Sandia must solve how to actually move the sand. The weight will be the challenge, because (if scaled up to 100 MW for commercial application) the aperture in a particle receiver could be as large as 10 meters square, so an enormous volume of sand gets transferred through a particle system. While gravity allows the particles to fall within the receiver, they also must then be cycled through the heat exchanger and storage tank and back to the receiver.

“You cannot just pump particles,” Shultz explained. “You need mechanical devices – which can break down, and they can be difficult to scale to the sizes necessary.”

The first few CSP towers are already operating commercially with molten salts as the heat transfer and storage, using potassium and sodium nitrate salts, at 565°C.

“The big advantage is this looks very similar to current molten salts plants, so there is operational familiarity,” Shultz said. “However the big disadvantage of advanced higher temperature molten salts is the potential for corrosion. So a lot of the research in the liquid system is understanding the cause of corrosion and mitigating them, and generating operational strategies to ensure that corrosion doesn’t harm the plant.”

A new mixture will be tried, using chloride salts, among the few liquid media able to get to the 700°C target in order to couple to the sCO2 cycle. Part of what the NREL team will look at is down-selecting to the specific mixture that will be the right one.

But there are real-world problems with chloride salts, according to SolarReserve Chief Technology Officer Bill Gould

“Chloride salts clearly provide challenges as a heat transfer fluid for high temperature CSP applications,” Gould said, explaining that it’s a lot easier to keep them corrosion-free in a small lab scale setting where you can seal off the corrosive effects of oxygen and water.  “But doing so in a commercial scale power plant is much more difficult. Seals leak, and CSP plants have daily startups and shut downs to match the sun’s cycle. Plant outages and equipment maintenance typically open the system to such intrusions. It’s just harder in the real world.”

“The attraction of supercritical CO2 is actually the simplicity of the system; it is relatively simple to transport and contain gases as opposed to salts which face corrosion or particles which must be moved mechanically,” said Shultz.  “But for the gas pathway the first big risk is the efficiency of the receiver. Gas is inherently not as dense of a media as solids and liquids, so it’s going to be a little bit more difficult to get energy into that heat transfer media,”

The other problem with a gas is that you must have an indirect thermal storage system: Unlike molten salts or particles, which are good at retaining heat, gas must transfer its heat to another material to hold heat. But Shultz sees both challenge and opportunity there.

There will be additional funding for firms devising solutions at the component-level to problems common to all three pathways. One challenge is how to make piping that can withstand high pressure applications. “One of the projects that we’re funding, is piping that can potentially be used in all three of these pathways,” said Shultz.

“EPRI have previously helped to qualified the manufacture of a new kind of alloy for these new high pressure applications. They will be working on proving out a new low cost manufacture of this new alloy and then qualifying the new manufacturing technology.”

An additional technology must be innovated. All three pathways will have to integrate with the advanced sCO2 power cycle. The reasoning behind coupling the CSP to the sCO2 power block is that traditional steam cycle power plants have a 600°C operating limit.   All Rankine-cycle thermal plants, whether heated by geothermal, coal, nuclear or solar power, are limited by the steam cycle. At 565°C, tower CSP plants operate near the upper limits of sub-critical steam cycles, but that puts a limit on future cost reductions in the power block.

“The biggest lever for increasing efficiency is the turbo machinery that actually generates the electricity; this has been well known since the days of the first steam engines,” he said. “The higher the temperature that you can put into that cycle the more efficient it is, the lower the levelized cost of energy produced. You have a similar capital cost for the plants, but you now produce more electricity for that same capital cost.”

“Molten salt plants top out at about 41% efficiency,” explained Shultz. He projects an 8-9 point increase in efficiency going from a 565°C steam cycle to the 700°C sCO2 power cycle.

“What we are really targeting for that extra 150°C is a thermal to electric efficiency for that power cycle of about 50% – significantly higher than current thermal plants. That increase in efficiency could mean as much as a 20% decrease in the overall levelized cost of electricity.”

“The size of the turbo machinery used in the sCO2 cycle is much smaller,” he said. “So there is much lower capital cost,” Shultz projected. “What we are modeling is that you could actually get closer to a 30% decrease in total levelized cost of electricity from current molten salt technologies.”

All awardees and their phase one funding:

In addition to this process, eight awardees have been selected to develop either component-level technology or utilize unique cross-cutting research capabilities that support the goal of a successful integrated testing site. Those awardees include:

DOE has provided an additional $10 million in funding to national labs to support this work. These projects will help to expand the foundational knowledge necessary to building this test site. Partnered labs include: