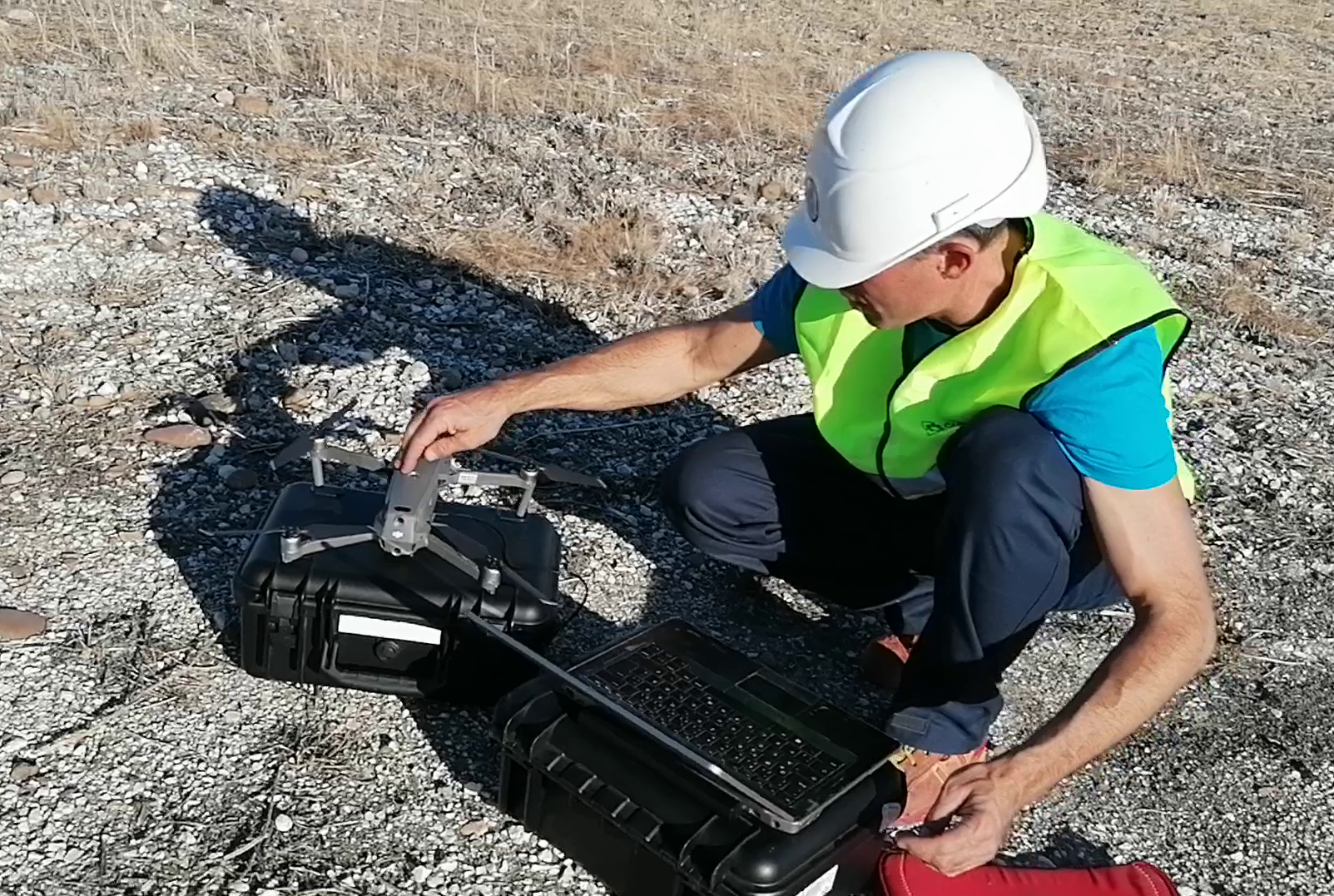 “There’s a lot of lot of stuff that can go wrong in a CSP plant, components that can fail, sensors that can be wrong. And in the long term all this affects the performance and also the safety of the solar field,” explained Christoph Prahl, who founded Volateq in 2020 together with concentrated solar research colleagues Anne Schlierbach and Wolfgang Reinalter. The three worked together on solar research at DLR in Germany and at PSA in Spain. They combine the expertise needed to save time and money in trough solar field operation.

Prahl’s understanding of the need to automate solar field monitoring comes as a much-cited author of solar research at DLR who brings his experience at PSA, where he modeled and validated performance testing of solar fields for CSP industry clients.

“it’s great to see that like, after years of research. There is really an outcome that has some benefit for the industry,” he said. “Because these solar fields so far have been kind of a black box; the operator has no idea about what’s going on out there because they are so big and so large and failures are very hard to detect.”

His colleague’s background was the reverse. Anne Schlierbach came to work at DLR and PSA after literally on-the-ground experience actually walking in the solar fields as a mechanical engineer in energy doing this monitoring by hand during commissioning and construction at Spain’s early CSP projects

“I like that we are getting out of the science bubble into application and that it’s useful,” she said. “What I really like is that the flight routines are really quick, the data acquisition time. It takes about an hour to do the data acquisition that the human being walking to the field would take three months.” 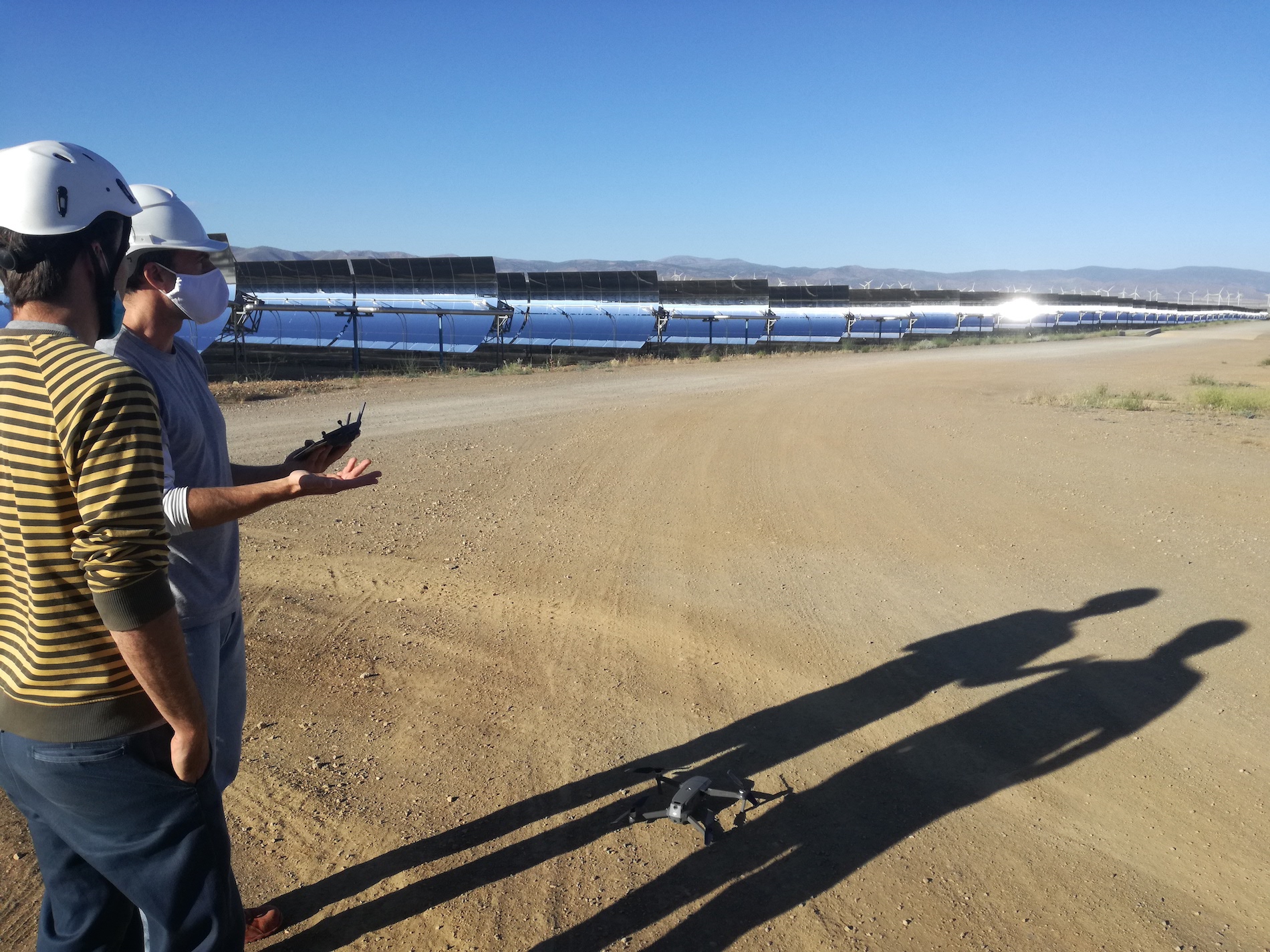 The drone that replaces walking the solar field monitoring with handheld devices is as small and lightweight as a shoe IMAGE@Volateq.de

The service that they provide is regular checks of the solar field using drones instead, that use AI to detect malfunctioning components before they create severe failures, so plant staff can instead focus on fixing errors and not just trying to locate them.

Potential savings of half a million euro annually

Prahl calculates that the savings from enhancing the performance, saving costs and preventing damages will amount to approximately half a million euro per year for a 100 MW CSP plant.

For its first year, the startup has been focused on the much more established trough CSP which has slightly different O&M challenges than tower. One example is diagnosing hydrogen buildup from off-gassing heat transfer fluid in the small absorber tubes receiving intense solar flux from the parabolic solar collectors.

In a trough 100 MW plant, there will be 40,000 of these tubes, so automating the checkup is a major saving over the lengthy job of humans driving around checking them with a handheld infrared camera.

The glass envelope of the absorber tube has a vacuum. If it loses the vacuum, then there’s no insulation and that can be detected in temperature rise. Prahl. described how they diagnose the hydrogen buildup by a process of elimination.

“Normally with an absorber tube which is okay, the glass tube temperature during operation is only slightly above ambient temperature, around 50 to 60 degrees; so not hot considering the fact that there is a steel tube inside it at 400 degrees,” he said.

“If the glass tube is getting hotter, there’s three root causes: the coating of the steel tube inside the absorber has degraded; so the heat loss is due to radiation. Or the glass tube has a leakage; air is coming in. The coating of the tube is being oxidized; that changes its color. But if it’s very hot but the color hasn’t changed; that indicates no air is inside the tube. So this shows that there must be hydrogen present.”

In trough CSP the most important failure points to catch are the presence of hydrogen in the absorber tube and the slope deviation in the parabolic trough collectors and thus the accuracy of their tracking and alignment relative to the sun. 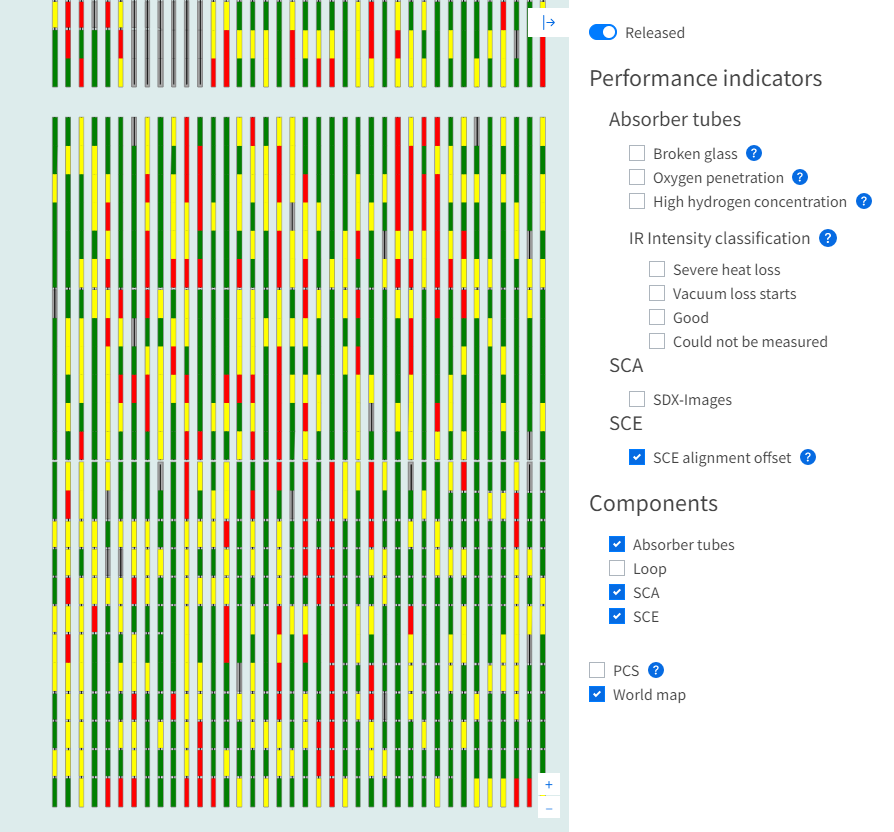 The startup provides a color coded graphic representing the degree of the deviation from ideal operation for each component that they check. The colors represent the classification of urgency of the need for action on each issue, from green; “OK”, through yellow; “observe”, to red; “repair now” and the user can narrow down which problems need checking and the degree of urgency.

“What we are actually doing is something like a health report,” explained Schlierbach “And then the operators of the plants can act on these reports; decide when to do several tasks or you also see the severity of the heat loss, for example, and then decide; OK, we have a high enough number in one loop of a CSP plant that it makes sense to already do an exchange cycle and do the repair cycle.”

The drones themselves are very small and light weight, about the size of a shoe. Volateq provides the drone, and does the initial calibration but then it is the customer’s drone as most customers have several plants and they can get ongoing health reports on more than one plant. Subscriptions to the data analysis are being offered at various schedules correspondingly priced whether monthly or quarterly.

“The business model really is the subscription,” she added. “Because we do believe this, that repeating measurements is more valuable than just a single measurement, a single analysis. Because you can repeat the measurement every month and find the systematic errors and take on the changes.”

While the first applications are for trough CSP, the team also offers PV monitoring and is putting together a version to address the very different challenges of tower CSP.

It’s very early days. The company was founded late in 2020, during a global pandemic, and yet already they are signing up customers in Spain and South Africa.