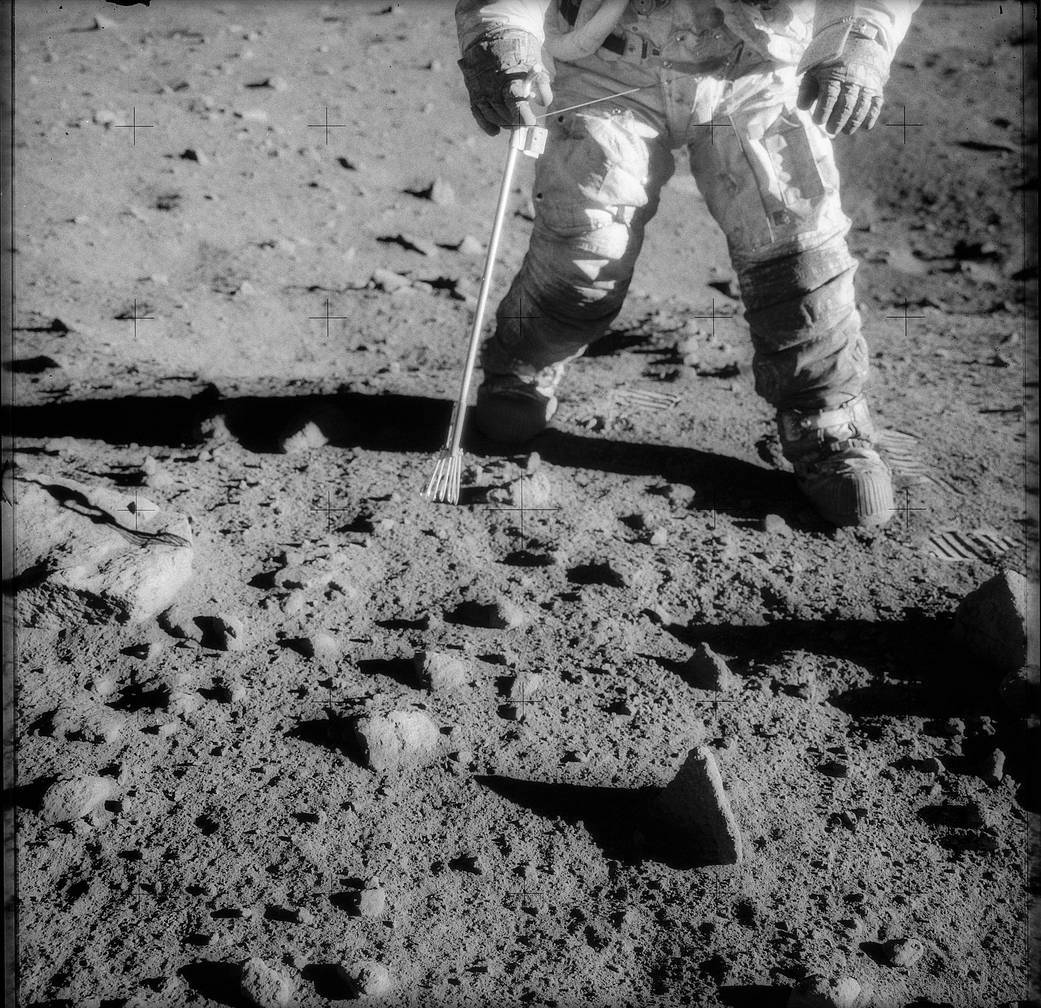 To build anything on the moon, we will have to literally start from the ground up and make the material to build everything from the regolith itself; Swinburne University of Technology professor Geoffrey Brooks told SolarPACES in a call from Australia this week.

“It’s like the history of the Earth accelerated. We took thousands of years before we learned how to go from making ceramics, to making metals. But on the Moon, we’re probably going to make that jump pretty quickly,” he said.

“If you look at the history of humanity. Started off we didn’t know how to make anything. And then we learned how to make ceramics from the Earth, which is one of the great breakthroughs for humanity, seven, eight thousand years ago. And then we could store food and build and then we learnt to make metals. What’s going to happen on the Moon is we’re going to go through those development steps very quickly.”

Brooks, whose original background was in metallurgy, became interested in solar applications for mining given Australia’s abundance of both resources, though he found that for mining on Earth, what has held CST back are its capital costs.

“But it costs $35,000 USD to fly one kilogram of anything to the Moon! So now, any differences in capital costs are absolutely trivial compared to the cost of getting equipment up there,” he pointed out.

So the Moon offers CST, the hot solar, the chance for us to create new materials from the ground up – but this time, without fossil fuels. Most chemistry requires heat. To rearrange the atoms of one material to form another molecular structure, to comprise a different material; nearly always requires heat, which for centuries been supplied on Earth by fossil energy.

This supplies a chance to supply heat with solar energy directly instead of by burning fossil fuels. Both forms of solar; CST and PV are pretty much the only Lunar option for supplying energy, with no coal, natural gas or wind, he noted: ”On the Moon, you don’t have many other options, right?”

So Lunar thermochemistry engineering is an increasingly interesting field for CST research now. The challenge becomes how to design solar systems for the Moon to make enough energy but without being too big, because of the cost of taking things up there.

“And then once it’s small enough to get it to the Moon, the issues then come down to how reliably can it work,” he observed. “What sort of things can you process and how much productivity can you get in a certain volume? Those kind of issues are quite different than on Earth. So I think solar thermal is very attractive for whole number of applications on the Moon.”

With some of his PhD students, Brooks co-authored Review on solar thermochemical processing for lunar applications and their heat transfer modeling methods that delves into the mechanics that will be involved in using solar thermal energy for mining on the Moon, to understand the very different physics and chemistry of an off-world planet, and how to rearrange the molecules that can be found in the regolith to make new materials like ceramics and use them to make bricks and structures.

“So, my students are doing all sorts of studies about heating regolith,” he said. “How quickly it heats up, how it conducts heat? When does it sinter, what sort of physical mechanical properties can you expect?How strong is the sinter? Can you walk on it? Then we’re also looking at melting it and turning it into metals and oxygen and trying to see what else can we make from it.”

Why the Moon’s lack of atmosphere favors solar thermal

Because there’s no atmosphere to carry heat away, there is no heat loss, and with no atmosphere, there’s no clouds, and so the sunlight is a better resource for creating and retaining heat than on Earth.

The Moon’s absence of atmosphere makes solar thermochemistry easy because you don’t need to attain as high levels of solar flux concentration as on Earth to generate the high temperatures needed to rearrange molecules to form new compounds.

“Melting point and boiling point are a function of atmospheric pressure and it’s an extremely high vacuum on the Moon: 10 to the minus 15 atmospheres; which is incredibly low,” Brooks explained.

“Even here on Mt Everest with lower air pressure, liquids boil at lower temperatures. This works in our favor. It changes the melting temperature and how hot you need to make things to change things. So when my students are trying to design equipment to sinter the regolith for example, to sort of vaporize the iron and sodium out, they don’t need as high a concentration of solar energy as here on Earth.”

This ease of processing materials at lower temperatures facilitates the use of smaller, lightweight solar concentrators like fresnel lenses or dish.

Much, much longer days

The sunlight is abundant. The Moon rotates much more slowly than Earth, just once every 29 days, so each day lasts much longer than the Earth’s 24 hours. Lunar daylight is 336 hours, compared to 8 to 10 hours on Earth. The temperature during these long days rises to a blistering 126°C.

Of course, this is followed by 336 hours – two weeks – of dark and cold night (at -173C) and most thermochemical chemical reactions don’t like to be interrupted, so this is one of the challenges that researchers are working on.

One possible solution Brooks mentioned is to locate these solar manufacturing hubs at the polar region facing the Sun (which is also of interest as it is near two possible water sources) where there is sunlight for over 90% of the Moon’s 365-day year.

The DNI on the Moon is only 1361 watts per square meter – that’s not as good as the best solar resources on Earth like in Chile, Australia and the MENA region. It’s comparable to the South of France. But this is offset by the long and cloudless solar days and the lack of heat loss.

The team recently published a paper detailing the thermodynamics of operating under such different laws of nature: Thermodynamic modelling of ultra-high vacuum thermal decomposition for lunar resource processing

“But there are complexities with designing for the Moon, because the low gravity makes the design of structures like rotating or digging equipment more complicated,” Brooks commented.

“There is a very different ratio of forces from Earth: the gravitational force holding things down is lower than the force that’s going sideways, so on the Moon you become like a very light person digging a hole on Earth, where you are much more likely to pull yourself over than a heavier person would be. This is really important for designing equipment for digging and moving. They’re trying to make equipment that’s stable for that kind of ratio of forces. You can solve it, but it’s not easy.“

Brooks is trying to find out the composition of an estimated 200 tons of parts left up there from previous missions that are potentially available to scavenge material from. But most machinery built on the Moon will be already as light as possible to transport, and then with spinning or moving parts, the design has to ensure it doesn’t topple over.

The dust on the Moon is a far bigger problem, especially for solar applications.“This dust is a really serious issue. It is a very, very fine material and it’s very abrasive,” he said. “A lot has come from meteorites, hitting the surface of the Moon and creating very fine, glassy material. To make it even worse, the rays of sunlight hit the fine material and polarize the surface of these little fine oxide particles, and you actually get levitating dust from the electrostatic forces in the dust created from this interaction with solar rays.”

One of his groups of students is looking at a solution for controlling this dust; heating the regolith into a ceramic pavement.

“Before we have humans try to move around and move machinery up there, we need to send up some equipment to basically sinter the surface where we are going to settle to keep all the dust down. Make it so hot that it forms a ceramic pavement,” Brooks said.

“The idea would be that you would have like a small wheeled machine with concentrated solar energy coming in from mirrors and you would slowly go by and turn the surface into a ceramic pavement so when we arrived there, we’re not constantly throwing dust everywhere into our equipment.”

But he cautioned that a challenge with this is that the regolith is actually a poor conductor of heat, and so getting the heat into the surface is quite difficult. The temperature drops off quite quickly: “You’ve got to get enough energy so that you can sinter the regolith. We think you probably need to get up to around 800 to 900°C. So we’re doing tests with regolith sintering at the moment to start understanding how the regolith sinters and how much heat you can get into the surface.”

Another group is looking at sintering just the top layer into bricks.“The good thing with this is you just need energy, so we can use solar. Other people are talking about mixing the regolith with a resin and then 3D printing ceramic structures like buildings. And the trouble is you need something to keep the regolith together, to stick it together,” he said.

All of these ideas need research now, he believes: “The first planned Lunar habitat is several years away and will probably involve only a few people. But then we will see that technology and the whole infrastructure take off in the next 10-15 years. But now that we’re moving to the stage where we’re planning to have actual groups of people living there in the next few years, then I think we’ll see all sorts of applications of solar thermal take off.”