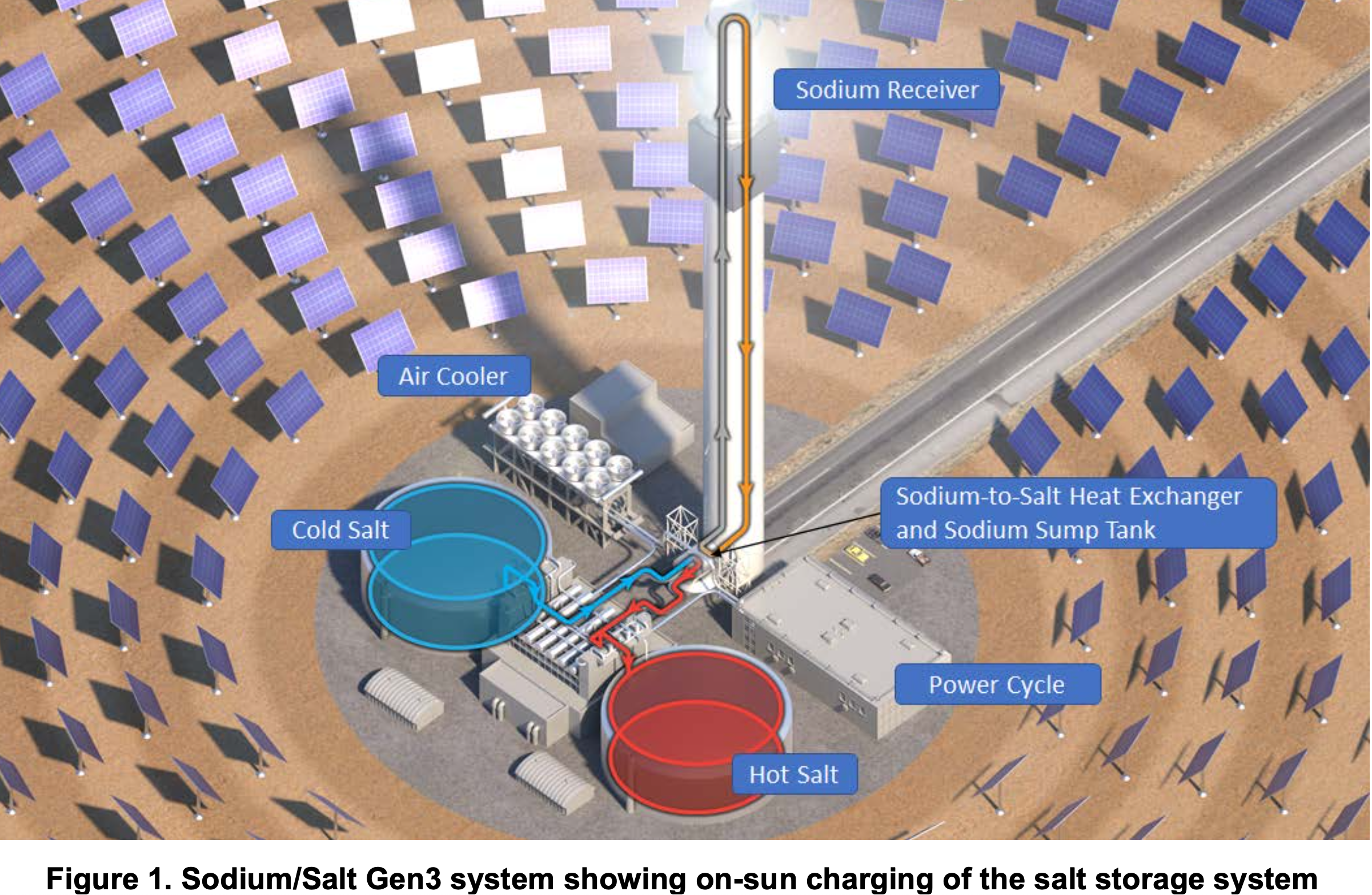 Innovating new energy technologies is more akin to making a movie with a cast and crew of thousands than the stereotype of the one lone inventor in a garage coming up with the whole thing alone.

An example is the US Department of Energy grant to try three different pathways to reduce the cost of third generation CSP, the dispatchable solar able to generate power round the clock.

Three separate teams of solar researchers affiliated with international networks of university labs and associated specialty industries won funding to compete using alternative liquid, gas or solid media pathways to design a next-generation CSP system to economically and reliably deliver temperatures above 700 C to connect to an advanced sCO2 power cycle in order to reduce costs in US markets to five cents/kWh by 2030.

“It was sort of like an XPRIZE competition, with multiple teams competing to deliver a bold solution to a global problem,” said Cliff Ho, who led the winning team from Sandia National Laboratories with a particle-based innovation. “It was exciting.”

Sandia, as the winning team of the three pathways now receives the final award of $25 million to go ahead to demonstrate their particle-based technology at a pre-commercial scale. (Story to come)

The new mix they proposed, Magnesium chloride, Potassium chloride and Sodium chloride (MgCl2-KCl-NaCl) can reach the higher temperatures needed to couple to the DOE-proposed supercritical CO2 power block to be connected to each of the three pathways – chosen because of its efficiency compared to today’s Rankine cycle-based steam power block.

But when higher temperature fluids are used, all of the containers and pipes and valves that move the fluids in and from the storage tanks and to the heat exchanger system for the sCO2 loop must all be able to withstand these higher temperatures and attendant corrosion.

A nanotech firm and a materials lab

A nanotechnology materials firm, Powdermet proposed a spray-on form of various cermet coatings able to withstand such temperatures. And a specialty material testing lab at the University of Wisconsin-Madison provided testing to independently validate which of these nanotech coatings was most effective and would also meet the low cost specs the DOE requires.

“It’s not trivial to heat up systems that can contain the molten salts up to the 720 ºC temperature,” explained University of Wisconsin materials researcher Lewis Handy-Cardenas.

“We were interested in testing and have experience running material corrosion tests in molten salt, while they have the capabilities of developing the coating and the novel cermet. The amount of corrosion a material sees depends highly on the chemistry of the substance it’s in touch with. It is very chemistry dependent. So that’s kind of where we come in; we build the systems and the testing equipment necessary to carry out this high temperature testing of the materials.”

Cermets (ceramic/metal alloys) are used in the very high temperature solar thermochemical reactors designed to manufacture solar fuels at 1000ºC and above, but these nickel-based superalloys are very costly and if used for all the piping and storage system throughout an entire CSP plant would fail the cost requirement.

“So the whole idea of using the cermet as a coating is to reduce the cost,” Cardenas explained. “There is availability of high temperature materials that will resist the corrosion of the salt, specially up to higher temperatures. But the problem is they start to get very expensive, so then you would use something that’s maybe a little more price friendly like stainless steel 316 and coat it with the cermet.”

Tests showed that coatings of Cermet NiWC3b had better corrosion protection than the metal or cermet alloys alone. This nanotech material would be sprayed on by high velocity, oxy-fuel thermal spray coating on the base alloy.

“So, first we tested their material in diverse compositions for cermets in different solid forms,” he said. “From there, we singled out a composition that worked best under molten-salt conditions. And then from there, we carried on static corrosion tests in the molten salt for the cermet applied as a coating on commercially available materials, such as Inconel 625.”

This university lab specializes in high temperature testing and characterization of materials exposed to different fluids for power engineering and heat exchangers. Cardenas’ team does not just test materials for corrosion, but also for friction & wear rate, which is important for pump manufacturers, for example, when designing bearings.

Cardenas found that this project would require additions to the ASTM G99-17  standards that guides the standard test method for wear testing with a Pin-on-Disk Apparatus.

“We developed a testing procedure which loosely follows the ASTM G99-17 standard to use as a benchmark to characterize material wear rate in molten salt,” said Cardenas.

“The problem is, lots of these standards don’t have a fine print on how it should be done for high temperature testing, so that’s kind of a guess. If you’re trying to look for the friction factor, for example, for a material that you’re going to be using for bearings – that’s one of the standardized tests – the problem is it only runs for a couple of minutes and it’s not really specified at high temperatures; it’s usually for ambient temperatures.”

So the team followed the available ASTM G99-17 procedure, but added a modification to implement a new procedure for parts that involve friction at high temperature and long duration.

“We developed a testing procedure included with our findings that should be followed when performing high temperature testing when using any of these materials with molten salts,” he summed up.