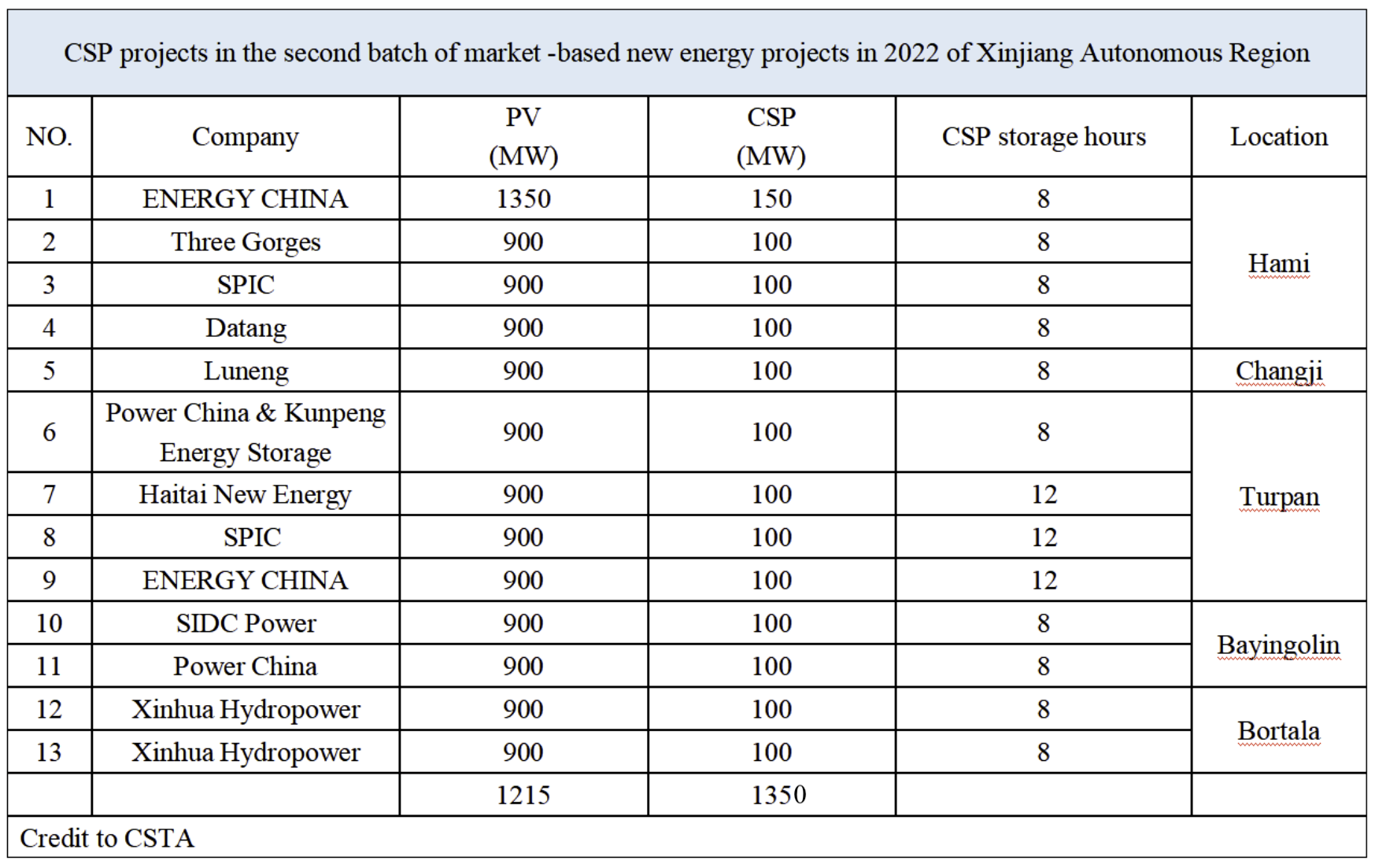 In January this year, three of China’s provinces; Gansu, Qinghai and Jilin, already announced a combined total of 1.1 GW of Concentrated Solar Power (CSP) projects for completion by 2024. These are already hiring EPCs and breaking ground.

Now the province of Xinjiang has announced an additional 1.3 GW of CSP on its own, which would bring China’s commercial CSP to a total of 3 GW including the operating pilot projects, easily eclipsing both Spain and the US in CSP deployment. (How CSP works)

According to China Solar Thermal Alliance, on July 4, the Development and Reform Commission of Xinjiang Uygur Autonomous Region announced the Second Batch of Market-based New Energy Projects, with most of the 13 CSP projects in Hami city, Changji city, Turpan city, Bayingolin Prefecture and Bortala Prefecture.

Unlike in the US, every CSP project in China has included the cost-effective thermal energy storage that makes CSP the flexible and dispatchable solar. As a thermal power plant, CSP also provides rolling reserve capacity needed to provide the grid with inertia and frequency control.

The proposed CSP projects; at 100 to 150 MW, are twice the size of the 50 MW projects announced in January in Gansu, Qinghai and Jilin provinces that are now under way. Like those, the new projects in Xinjiang will be developed by some of the same huge state-owned firms such as Three Gorges Renewables (the largest renewable energy firm in the world; having built the 22 MW Three Gorges Dam) that are developing the CSP in Gansu, Qinghai and Jilin. Xinjiang’s developers include Three Gorges, SPIC, ENERGY CHINA, Datang, Luneng, Power China & Kunpeng Energy Storage, Haitai New Energy, SIDC Power, Power China and Xinhua Hydropower.

The doubling of project size from 50 MW in Gansu, Qinghai and Jilin provinces to now “full-size” 100 MW in Xinjiang province suggests that these many of these firms have been reassured by their first six months of experience with developing CSP.

However, at twice the construction build required, this will make it very difficult to complete these projects by 2024 – an already tight deadline, but now starting 6 months into that deadline. During China’s pilot program, some projects did have to drop out, unable to complete on time – which would mean earning less than the announced tariff.

China’s very consistent planning to grow CSP in its 5-year plans is as part of large gigawatt-scale renewable energy complexes comprising intermittent renewables; PV and wind, along with batteries and CSP for storage. The renewable complex as a whole must deliver electricity to compete with coal prices in that locality, which average around 5 cents/kWh.

These huge renewable complexes will have most of their capacity in wind, PV and batteries, reflecting CSP’s relatively under-commercialized technology compared with the more familiar renewables and batteries. Xinjiang’s total capacity will be 48 GW, with 27 GW of PV, 13 GW of wind, and 7 GW of storage, between batteries and the 1.3 GW of CSP. Batteries will be used to cover short duration needs of 2 to 4 hours, while the thermal energy storage in the CSP projects will cover 8 to 12 hours daily.

It is yet to be announced whether these new projects will be the more traditional trough CSP or tower, but given China’s trend to date, tower looks most likely. The chart below shows the 1.1 GW of projects announced in January in the provinces of Gansu, Qinghai and Jilin. 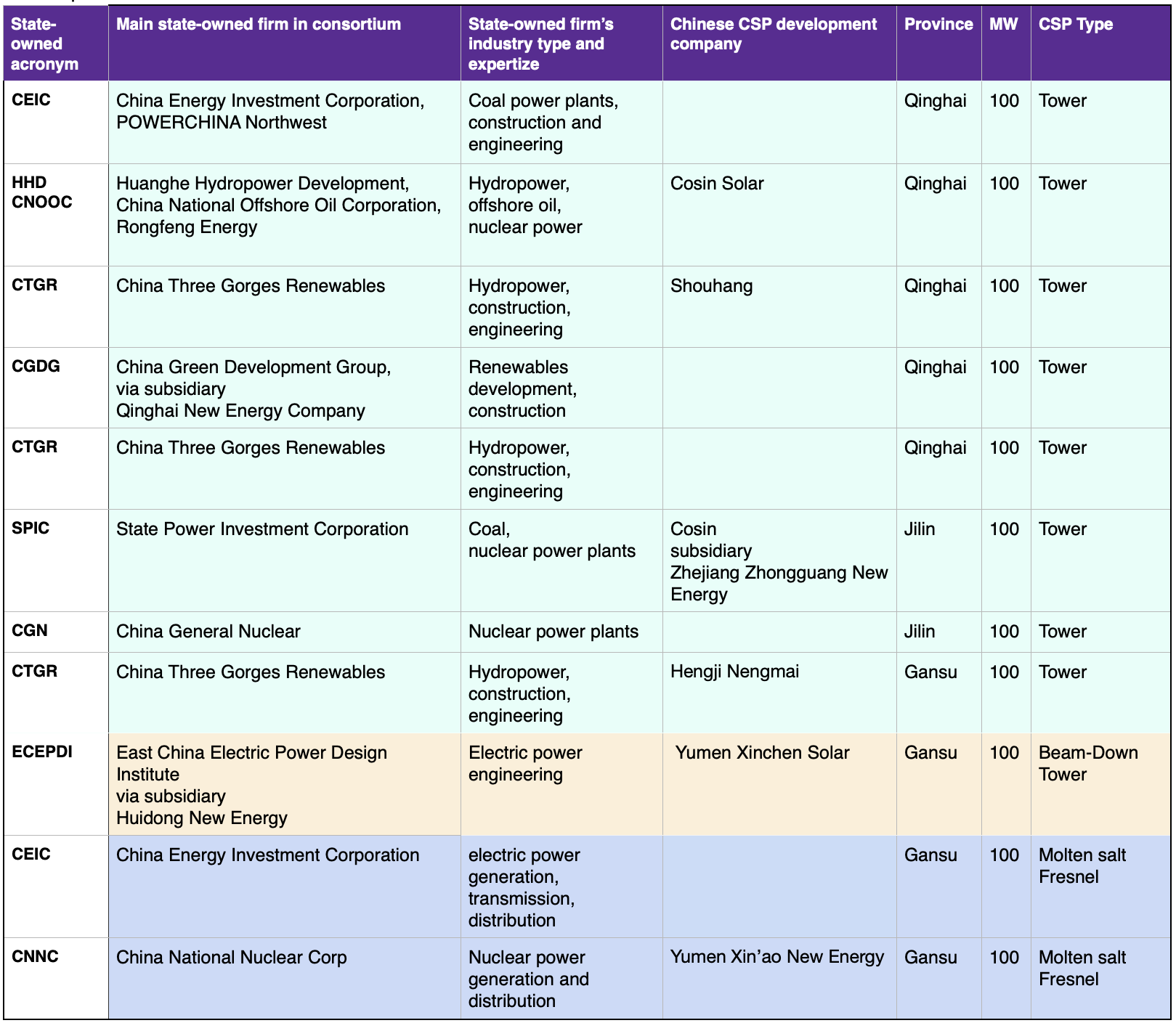