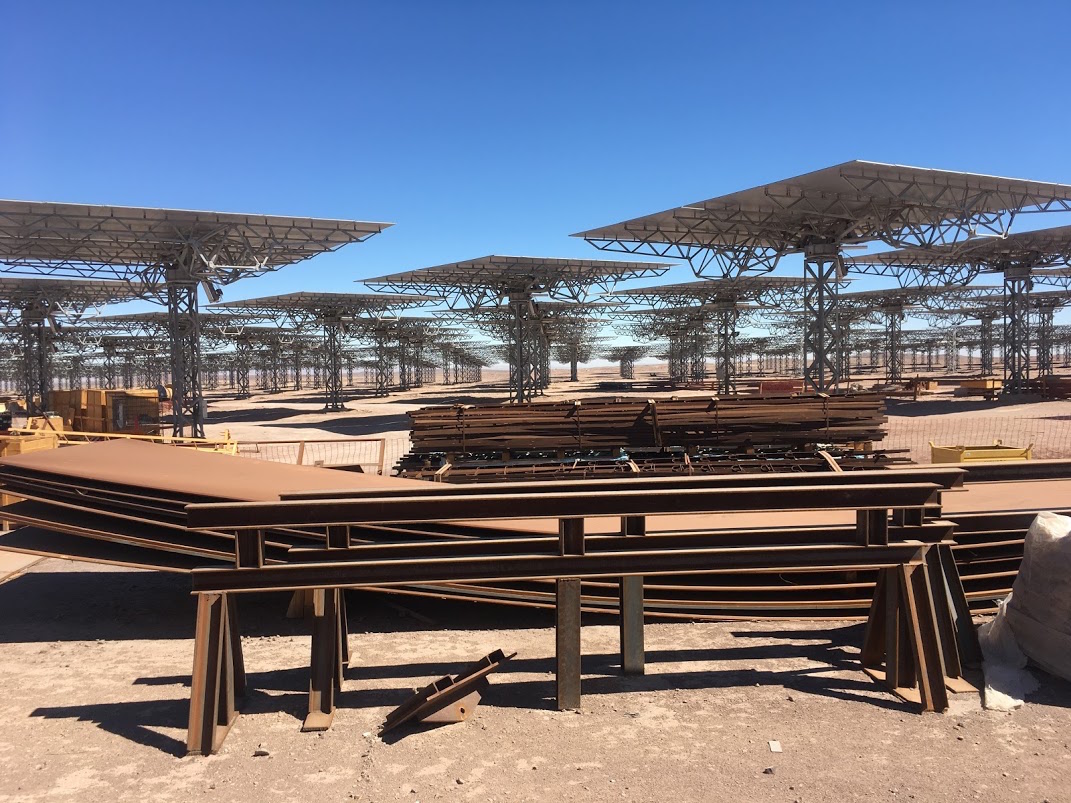 In October 2017, SolarReserve was first to bid CSP with storage at somewhere “under 5 cents” per kWh in Chile, according to CEO Kevin Smith

The levelized cost of electricity (LCOE) of Middle East CSP projects could fall below $50/MWh next year, two of the industry’s leading consultants predicted at CSP Seville 2017.

Like other renewables, CSP costs have fallen as the technologies behind it have matured.

ACWA’s 700 MW Dubai Project, which combines tower and trough technologies, will deliver $73/MWh LCOE from direct normal irradiance (DNI) of about 2,050 kWh per square-meter per year, noted Jonathan Walters, MENA CSP Knowledge and Innovation Program Team Leader and a senior figure at Castalia Advisors. Given this, Walters said, $50/MWh could easily be achieved in Jordan, Egypt, Tunisia, or Morocco, where DNI typically reaches 2,500-2,800. The cost ultimately depends on the generation profile of the particular country; Dubai needed night-time solar, but not every country will need that, he explained.

“But in terms of the basic solar resource and being able to get more concessional financing than Dubai had, so long as countries do it on significant scale – it doesn’t have to be 700 MW – I don’t see why we can’t get 5 cents (per kWh, or $50/MWh) in MENA (Middle East and North Africa) in 2018.”

The levelized cost of $50/MWh will “definitely” be achieved next year, especially if Chinese suppliers and financing continue to be involved in MENA projects, Frank Wouters, Director of the EU GCC Clean Energy Technology Network, said.

“If they throw all the Chinese muscle at it, I think we’ll see even lower prices,” he said. “They like competition. They change policies quickly, they increase targets on a regular basis, decrease tariffs if they see it’s overpriced. They’re quicker in that sense.”

Three criteria to bringing down prices

Belen Gallego, Founder & CEO at Empresarios ATA Insights and Walters’ colleague partner ofin the MENA innovation program, pointed out that six to 12 months ago nobody in the CSP sector would have dared mention LCOE. Now the numbers are “looking better” and the industry is buzzing, she said.

In 2008, the cost of Spanish CSP projects reached an LCOE of was at around $250-260/MWh, and PV projects were at around the $450/MWh mark, Gallego noted. Now, PV is at $20-30/MWh, and CSP has reached as low as around $60/MWh in Australia and Chile, despite there being only 5 GW of global CSP installations compared to 80 GW of global PV installations, she said.

Walters said there are three factors to lowering the electricity costs of a CSP plant: scale, financing and supply chain. Big developers like ACWA have the upper hand when it comes to scale, he argued, noting that the 700 MW Dubai project will single-handedly increased global CSP installed power by 14%.

“I think we’ve seen from how the bidding process is structured that it gives information about plant-level economies of scale, because at 200 MW the bid was 9.45c (per kWh) [$94.5/MWh] and at 700 MW it was 7.3c (per kWh) [$73/MWh ]. I don’t think we’ve ever had a bidding process that has told us what the plant-level economies of scale might be in such precise terms,” he said.
“The other thing is the sheer scale of megawatt hours, the use of the plant, the capacity factor of the plant. If you have up to 15 hours storage, which the Dubai plant will have, then you’re selling a lot of energy, which allows you to spread the fixed costs and get you down to something low like 7.3 (cents) [$73/MWh].”

Where financing is concerned, Jordan, Egypt, Tunisia and Egypt have an advantage over wealthier Dubai because they are eligible for concessional climate finance from the likes of the World Bank, he said.

Wouters also emphasized the importance of the supply chain to cost, and he recalled that all four projects he has been involved in have been expensive because they suffered from a limited number of suppliers. ACWA created competitive tension in Dubai by rejecting the traditional approach of tendering a turnkey lump sum plant, he said.

“The problem with that approach is you have a main contractor who puts a margin, a subcontractor with margin, supplier with margin. This is not the way to low and competitive prices. What they (ACWA) are doing right now… is they’re talking to all the suppliers,” Wouters said.

Growth of CSP market will have dramatic price impact

Ultimately, Wouters said, the size of the CSP market will determine the price. Both he and Walters were extremely bullish about CSP’s prospects, with Walters arguing that in many countries the weighted average of daytime PV and night-time CSP is already significantly below gas-fired power and 24-hour dispatchable power.

In many respects, Jordan can benefit even more from CSP than it can from PV, Walters said. “The humidity and dust in Dubai affect CSP much more than they do PV. Jordan doesn’t have that level of humidity, so I think there’s very good reasons why you can expect a price that’s significantly lower than Dubai (in CSP) that you wouldn’t see in PV.”

“If we keep growing this market, the cost will continue to come down… it’s very simple, and there’s nothing in the CSP value chain that is rare or limited in supply. We have to continue getting used to the idea it will come down even further.”